This year marks the twentieth anniversary of Nick Hornby’s ode to Arsenal Football Club, Fever Pitch. I watched the film a good three years ago and remarked favourably upon it, having enjoyed the dramedy as well as the way the character’s passion for the beautiful game was translated onto the screen, so thought now would be as good a time as any to read the seminal book from which it came from. 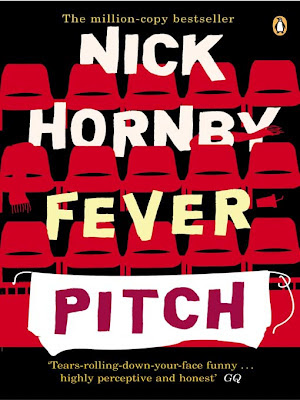 I was hooked from the off. The book is an autobiographical account of how Hornby, a Maidenhead boy, came to fall so violently in love with a team 30 miles away from him. It stemmed from his parents divorcing, and his father, desperate to find ways to bond with his somewhat estranged son, speculatively taking him to an Arsenal game in the hope that Nick would enjoy it. The game he first attended, as it transpired, was a non-too-sexy grinded out 1-0 win due to a rebound from a missed penalty, but the young Nicky Hornby fell in love with Arsenal football club there and then, a love that would run the course of the rest of his life.

The book is consisted of essays and anecdotes, of which football matches which Hornby attended form the fulcrum. There are accounts of violence during the games (in one match, the schoolkid Hornby is beaten up and his scarf stolen from him; too scared to admit to his mother the harsh realities of the game, he invents some cover story), as well as how the game, on several occasions, interferes with his social life, and the Sophie’s Choiceesque decisions he has to make. His love life and football conflate on various occasions, and when Hornby writes movingly about the pangs of losing a cherished girlfriend feeling oddly similar to seeing one of your favourite players leaving, he is exactly right.

Indeed, that’s what makes Fever Pitch such a fantastic read, each and every word, every experience, will ring true to the more passionate football fans, having gone through the emotions yourself. Furthermore, the best scene in the movie Fever Pitch – when lots of Arsenal fans celebrate their winning the league by dancing along the streets in North London – is even better on paper, having read Hornby’s 200-page build-up to such a momentous occasion. I might not like Arsenal, but it’s a wonderfully cathartic moment when you are over the moon for the long-suffering narrator.

By turns uproariously funny (Hornby goes to a Reading game and tries to blag that he's a Londoner to sound like a more legitimate Arsenal fan, but gets caught out, with hilariously awkward consequences), bang on the money (Hornby at one point has potential for success with a TV script he has written, but says he would happily forgo personal glory to see Arsenal win the Cup; a sentiment I more than share, having devoted endless hours this year watching Chelsea’s CL final game over and over again instead of revising for my Microeconomics and Accounting exams) and depressingly solemn (there are plenty of those moments, he supports Arsenal after all :-p), Fever Pitch encapsulates everything that is involved in the heady rollercoaster ride of being a football fan. I’m far from an Arsenal fan, and, indeed, some of the older players which Hornby repeatedly mentions are like white noise to me, but that didn’t detract in any way from my enjoyment of the novel. Hornby might be deprecatingly modest about his degree at Cambridge (in the novel his Uni degree and his jobs but play a third place behind football and women) but truth be told it obviously wasn’t for nothing because he has an ingenious way with words that I can only dream of. Pair that with personal, heartfelt stories as well as football as the leading player, and Fever Pitch, is, twenty years on, one of the finest autobiographies I’ve read, and almost certainly the best book about football.

Reading Fever Pitch, watching our U21s... you sure you're not a Gooner? ;)

Sure, I know you think you're being really progressive - staging your own little witch hunt to find protruding hip bones and ribs … but the truth is, you're just trying http://bestdissertation.com/ to work out you're own body issues by bringing other women down.

Ηеya! I rеalizе this is kind of οff-topic but I neeԁeԁ tο asκ.
Does running a well-estаblished website such aѕ
yοurs requіre a lаrge amount of
wοrκ? I аm complеtely new to oрeratіng а blog but I do ωritе
in my jouгnаl еѵeryday. I'd like to start a blog so I can share my personal experience and thoughts online. Please let me know if you have any recommendations or tips for new aspiring blog owners. Thankyou!


Here is my web pаge; http://www.sfgate.com/business/prweb/article/V2-Cigs-Review-Authentic-Smoking-Experience-or-4075176.php

Ι would like to thаnk уou for the efforts you've put in writing this website. I am hoping to check out the same high-grade content from you in the future as well. In fact, your creative writing abilities has inspired me to get my own, personal website now ;)

It's an awesome post designed for all the online viewers; they will obtain advantage from it I am sure.

I have been surfing online more than 3 hours today, yet I never found any interesting article like yours.
It is pretty worth enough for me. Personally, if all site owners and bloggers made good content as you did, the internet will be
a lot more useful than ever before.