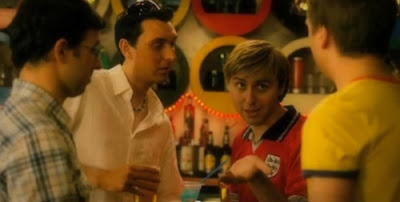 Anyone who watches the show knows the set up of the inbetweener boys: Will McKenzie, bespectacled, well-mannered but massively irritating, his best friend Simon, the most attractive of the clan but let down by his gelled-up hair and his relentless thirst for pricktease Carli D’Amato, who clearly doesn’t feel a fraction of the intensity he does to her, dim and slow-witted Neil, and Jay, chronically bullshitting about women he’s shagged, things he’s done, and er, women he’s shagged.

The four boys’ ridiculously embarrassing travails through life made for three hugely entertaining series on Channel 4, albeit with the third series being discernibly less funny than the previous two, series three feeling a lot like a re-hash of the jokes they used before, but turned up to an eleven. Well, in the boys’ big-screen outing, they hit Greece on summer holiday, and now they have a brand new country to bring their individual brand of gross-out comedy to.

Perverse as it is, throughout the film, I was actually reminded a bit of the Sex and the City movies, except for four boys rather than women. Now, hear me out. Lots of people felt disappointed with Sex and the City the Movie, feeling it was just one drawn out episode, but that’s pretty much the same with the Inbetweeners Movie, and in both movies, I had a terrific time.

Further more, as with Sex and the City, despite all the women being well into their forties (and Samantha considerably older), they all have their journeys to make, lessons to learn throughout the course of the film, whether that be about courage, sacrifice, fidelity, or love. The lessons in The Inbetweeners Movie, suffice to say, are a little less meaty, but there is a surprisingly uplifting feel to the way the four boys find redemption in their sweet/sick ways.

Leggy blonde Laura Haddock, who is no stranger to lads’ mags across the UK, leads the quartet of attractive girls who catch the four boys’ eyes. Each girl is pretty in her own way, particularly Laura Haddock (Will’s love interest Alison) with her astoundingly definded cheekbones and babydoll eyes and Tamla Kari, the pretty brunette who clearly likes Simon, despite the fact that he is still blindly going on about Carli, who, incidentally, is also at Malia.

The way the four boys eff it up with their respective female counterparts is exactly like in an episode of the show, except, this being the big-screen, the writers Damon Beesley and Iain Morris were a little more generous to their four long-suffering leads. Nonetheless, all four boys make more than their share of horrendously cringe-inducing gaffes along the way.

But the funniest scene in the entire film was, for me, the cringefest that was Neil, Will and Simon trying to get the girls’ attentions by dancing up to them. If you can call it dancing. I call it “sides splitting with laughter.” 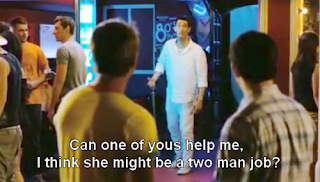 Critics have hailed The Inbetweeners Movie prurient, juvenile, and relentlessly crude. They are right. Some of the jokes do fall flat, but the ones that are good are great, and coupled with a cheesy-cool soundtrack, some genuine drama (Simon and Jay fall out, like, omgz!!!!) and an arsenal of one-liners that will have you hiding behind your hands with embarrassment, The Inbetweeners Movie pretty much does what it says it would on the tin, with an added bonus of the unexpected but genuine satisfaction the viewer gets from seeing our four boys become men – sort of.

"He shoots, he scores! Right up the vag!"

Great seeing you on Wednesday Emz, chuffed to bits it's all working out for you :)

I had a fab time! So much banter!

OMG. have to say I'm really looking forward to this. no idea when it comes out in Aus, but I won't be back for another 4 months anyway, so I'm going to have to hold out...

Thanks for enlightening me, as I hadn't seen the series but I hate those lad type movies, so not for me!

Great review...I've just seen this movie and there's definitely more to it than meets the eye initially!

It can't work as a matter of fact, that's what I suppose.


I have enjoyed reading your post. It is well written. It looks like you spend a large amount of time and effort on your blog. I appreciate your effort. Please check out my site.
Child swim lessons