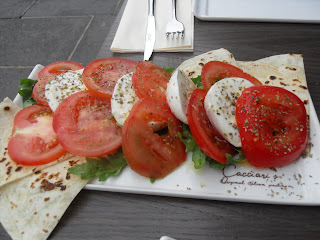 In a cosy cafe-alike in Old Brompton road sits Cacciari's, a cosy and utterly likeable Italian restaurant. The waitress serving us was lovely; and such was their hospitality that we were gifted a free Bellini by the end of the night; always a welcome treat. I sampled almost half the cocktail menu, having the mojito, the Bloody Mary, the margherita and the Bellini, and each cocktail was loving prepared and tasted great, in particular the margherita, which was a lot more peppery than how I'm used to, but it was all the better for it.

Food-wise, I was almost knocked out of my seat with how reasonable the prices were, not least as we were in Kensington, one of the most wealthiest parts of London (and trust me, plenty of other restaurants in Chelsea & Ken are more than happy to ride on that SW-postcode and use it as an excuse to churn out crap food). For starters, much like at Theo Randall, I had mozerella and tomato, but unlike at Theo Randall (£12 for a tiny plate meant that it was essentially charging its customers £6 a bite), the £9 price tag at Cacciari's was justified, a generous-helping was given of the cheese and tomato, with cute little pans holding it all together. So far, so excellent. 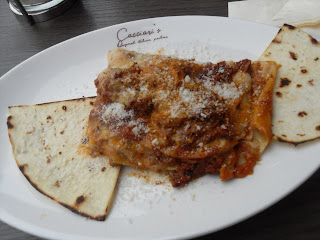 For the main course, I had Lasagna alla Bolognese. Lasagne's always a tricky one in restaurants because it can turn out either too starchy, or not full enough. In Cacciari's, it was the perfect balance between the two, and the parmesan cheese given to us in a little pot was a more-than-perfect supplement to it. The fusion of meat, cheese and all the other flavours in my lasagne rendered it absolutely delicious, and, with a cold Peroni beer to drink with it, it was a near-on flawless meal. Having been on holiday in Italy last year, the meal I had in Cacciari's last Friday was genuinely the closest thing I've tasted to proper Italian cooking since then.

There was a little beer garden behind the restaurant as well as chairs in front of it, meaning that customers get their choice of places to sit to suit their mood. Whilst lacking the grandeur that many of the other South Kensington restaurants parade about, Cacciari's humble surroundings worked to its advantage; it was a thoroughly unpretentious, value-for-money place to eat in. 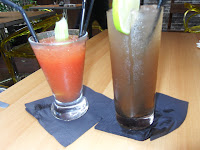 The greatest thing about Cacciari's is that it fully goes by the merit of its food & drink, rather than any frilly ornaments. If you remember Theo Randall, which went out of its way to show off how great it was even though the food was less-than-brilliant, Cacciari's is a delightful counterpart; the chairs and glasses in the restaurant are all from Ikea. The setting is cheap and cheerful, and as such, allows the restaurant to focus its attention on the thing that actually matters in a restaurant - the quality of the food. Cacciari's is the closest thing you're going to get to finding a bargain in Kensington; SW7 heaven.

Nice to find a restaurant review here, I'm a big foodie, so good choice of subject. My fav is the tomato, mozzarella and basil salad. Thanks for review as I'm often down in London shopping.

protect your dog with a dog seat belt