Childhood friends Nick, Dale and Kurt, once known as the “three musketeers” are still friends into their adulthood, and meet up on a daily basis for a drink and meal at their local bar. Trouble is, whilst their friendship thrives, their work lives leave a lot to be desired. Nick (Arrested Development’s Jason Bateman) works in a corporate environment, with a psychotic boss Dave Harken (played by Kevin Spacey) whom gets arsey if he is so much at 2 minutes late – after 6am. In one scene, Harken entraps him into necking scotch – at 8 in the morning. Nick despises his boss, but puts up with his bullying, knowing – or thinking – that if he takes the shit for a while longer, he will receive the promotion to VP that he has so hardly worked for. That hope, we later find out, turns out to be completely misguided.

Elsewhere, Jason Sudeikis’s Kurt is an account manager at an environmental firm. He enjoys his job, the easy banter he has with cute delivery girls and his rapport with his kind-hearted boss, Jack Pellit (Donald Sutherland, in a role much like his in The Italian Job in more ways than one). The only downside to his job is his boss’ cokehead dipshit son (played by an almost unrecognizable Colin Farrell). Luck not being on his side, his boss has a heart attack near the start, leaving the firm in the less-than-capable drug-taking hands of Bobby Pellitt. And finally, and most hilariously, we have Charlie Day as Dale, a dental assistant who’s loving relationship with his sweet fiancée bordering on schmaltz, having to deal with his nympho dentist boss Julia Harris (Jennifer Aniston), who spends far more time trying to fill her own cavity than those of her patients.

The premise sounds funny but flaky, but the three beleaguered leads make it work. Jason Bateman is no stranger to awkward comedy, having led Arrested Development for many years, but he of the three is probably the one who “plays it straight” the most. Charlie Day has all the energy and hyperness of a hamster on acid and is by turns lamentable, annoying, and likeable. Jason Sudeikis is given some brilliant one-liners, which he delivers with glee. But just as important – if not more so, are the eponymous bosses. Kevin Spacey’s evil boss is an amalgam of his Keyser Soze as well his sadism in Se7en, but with a terrifically subtle darkly comic side. Colin Farrell’s transformation into his role – hair slicked back, constantly sniffing due to his drug addiction is what characterizes his performance more than any acting he really does. But Jennifer Aniston is superb. I quite liked her in Friends, although considered the other five of the cast all better than her, and have been less-than-impressed with her film CV so far, but in Horrible Bosses, her dedication to her role as the crazy bitch sex addict is second-to-none. In one scene, she traps poor Dale in her office, where she is wearing nothing more than panties, suspenders, and her dentist’s uniform. Dale tells her that her lack of clothing/nudity is crossing some kind of line. Julia argues otherwise. “Can you see my pussy?!” In another scene, she brags who she masturbated so furiously to gossip girl’s Penn Badgley that “[she] broke a nail.” It’s a fair cry from the clean-cut Rachel Green that we’re still used to thinking of Aniston as, but without a shadow of a doubt, it’s the best film performance she’s given to date.

There are laughs to be had elsewhere. As the three men get increasingly riled with their ridiculously horrible bosses, the idea is banded about of killing them off. At first, it’s in the name of banter, but as their working lives becoming escalatingly awful, they realize they are left with little option. So they go to a dodgy part of California, wherein they are introduced to Jamie Foxx’s “hitman”. Foxx himself is a revelation; we’ve seen him excel in the serious supporting role (Any Given Sunday, Collateral), and take the lead exceptionally too (Ray), but here, as surly criminal Motherfucker Jones, he is a joy. 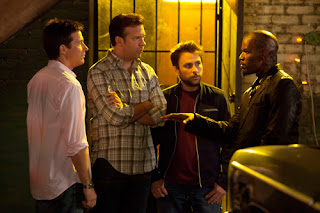 Horrible Bosses has overtones of Alfred Hitchcock’s Strangers on a Train, played for laughs, and with lots of dirty sex jokes along the way. Unlike the majority of films which attempt to amalgamate the comedy and crime genres, only to fail miserably, Horrible Bosses is a roaring success. Much of this owes to the glittering A-list cast and their not being embarrassed to look stupid on stage, but the writing is also excellent, and I received more than one surprise at the plot development of the film (one scene, so out of place, so sudden, and so shocking, surprised me so much in a way that I hadn’t been so taken aback since *that* scene in 2005’s Cache.) Clever nods to pop culture and a brilliant reverse-product placement gag at Toyota are littered around the film, leading me to feel it really is smarter than the majority of critics have written it of as The film takes dark issues such as murder, rape and blackmail and makes a gigantic joke out of it all. Some have not been impressed by this approach, but I found the film an unparallel treat; and was chuckling from start to finish. My favourite film of 2011 so far.
Posted by Emma at 8/02/2011 08:42:00 pm

Donald Sutherland, just love him. My best 2011 movie has to be 360, which I saw at the LFF, starring Jude Law, Rachel Weisz and Anthony Hopkins, was nominated for Best Film but although good, I have reservations as to whether it'll pass muster!