Mythology and modern day come together gloriously in Nora Roberts' delightful creation. Malory Price, on the cusp of getting sacked from a gallery she has given many years of loyal service to and in an economic situation that could best be described as "precarious", she sees nothing to lose in attending an unusual cocktail party at the ominously named Warrior’s Peak held by the even more unusual odd couple of Pitte and Rowena, who don't look dissimilar to characters from a Celtic myth themselves.

In the meeting, she meets Dana and Zoe, two women just as in the dark about the invite as she is, and who, like her, are in dire financial straits as she. Pitte and Rowena tell the three a tale of trapped demi-goddesses and an evil spirit who keeps their souls locked, and offers them a very generous cash prize if each of the three women can successfully embark on a quest to find the three "keys" to unlock them. Malory, Dana and Zoe are given an initial deposity of $25,000 alone just for trying, and for the women, it seems too good to be true.

Malory, selected as the first up, on further research, discovers the story is darker and more tragic than she could have imagined, with the story of the three trapped goddesses being told in various paintings. Luck would just so transpire that the owner of one of the paintings turns out to be a huge dish, local reporter Flynn Hennesey, who also turns out to be Dana's step-brother. The convenient plot turns just keep coming when another painting is owned by Brad Vane, Flynn's mate (who is quite taken with Zoe) and another owned by Jordan Hawke, sexy and successful fiction writer whom Dana once dated but parted terms with acrimoniously. No prizes for guessing where these little match-ups are headed, but they are depicted with enough conviction and male/female repartee to be a delight to read. Key of Light, which focuses on Mal's journey, deals more with her budding romance with Flynn, who despite having the semblance of being an everyday cheery guy, has the odd proverbial demon in his closet, and it is up to Malory to unlock those, in the same way she is to unlock the first lock. I have only other read one other Nora Roberts novel, small-town murder mystery Carnal Innocence, and the main thing I remember about that (aside from its oh-so-obvious plot twist; Agatha Christie this woman ain’t), was it's t’rifficly steamy sex scenes. It was mainly what urged me to buy this book, to be quite honest, and Roberts does not disappoint; the romance scenes between Flynn and Malory are appropriately hot and juicily detailed. 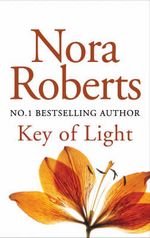 The rest of the book is also perfectly good; there are some engaging subplots and supporting characters (Flynn's dog Moe always seems to pop up at the most inconvenient of moments, and there's the token gay best friend who comes out with some zingers), and the focus on the three women's budding friendship and their plans to build a hybrid gallery/bookshop/hair salon makes for some sweet sorority. The banter between Dana and Jordan hints at a delicious love/hate relationship that should make for some wonderful hate sex in the sequel, and the relationship between Brad and Zoe (he, an uptown boy, she a struggling but kind-hearted single mother who only has room in her life for one man – her son) is written adorably; Brad, for all his millions, just can’t get it right with Zoe and there’s an odd sort of pleasure in that. Of the two mystical characters Rowena definitely interests more than her male counterpart, and she is painted as the very figure of loneliness behind a veneer of calm. Lastly, the dastardly villain of the trilogy, Kane, is a great conviction, almost a Voldemort for adults, if you will. Nora Roberts is best when she's intermingling the minutiae with the macrocosm, and Key of Light is a huge success; i will hungrily search out Key of Knowledge and Dana's story.
Posted by Emma at 5/04/2011 07:11:00 pm

I didn't know you were into book reviews - very good and an unusual choice. I'm not really into that type of fiction though.

Nice article, thanks for the information.

I found a great deal of effective info here!

Unknown said...
This comment has been removed by a blog administrator.
3:47 am

Key of Light is the perfect blend of romance, mystery, suspense and mystical elements. Mallory is the perfect heroine- independent, willing to believe in the celtic myth, loyal to her friends etc. Flynn is the hero who helps her despite his skepticism. It is fast paced, exciting and intriguing with great secondary characters of zoe/dana/brad and jordan--all of whom will have their own story
in the following books of this trilogy.

It's a supernatural story of legends and magic. Reminded me a lot like the Three Sister or Irish trilogies. It's about the beauty inside and the possibilities that are within our reach. A great new series. I can't wait for #2!!