Second episode in, 15 contestants left. The participants are awoken at the figurative crack of dawn via a recorded message on a laptop. Alan Sugar tells the group of their new challenge – to market and sell a new mobile phone app. I liked this challenge a lot, in this day and age, a huge majority of people are fiddling with apps on their phone when on the tube, and there seems to be an app for almost everything, however weird or wacky, so it would be an interesting thing for the teams to do. Once again, they’re grouped boys vs girls, the ladies have a man advantage. 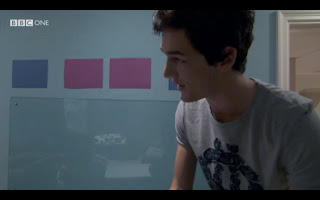 When picking Project Managers, Leon puts himself forward, although he has an agenda; in the last episode, Alan Sugar had commented that he wasn’t involved enough, so he wants to prove Sir Alan wrong. Several other men volunteer to be PM as well, but eventually it goes to a vote and Leon gets the role. The boys are moving along at a good pace and before long have decided on their app – Slang-a-tang, an app that gives soundbites of people from all over the UK, as well as over the world.

Things are going considerably less smoothly over at the girls’ team, where Susan gets herself into a bit of a mess when trying to pitch her idea. She says something along the lines of “Imagine I’m here, and you’re there. And I’m me and you’re you-” Needless to say, the team are massively underwhelmed with her idea and Project Manager Edna tells her to pipe down, which Susan refuses to do. When she’s finally silenced, Susan sulks in a fashion dissimilar to a spoilt child. It’s impossible to warm to the woman.

Time’s running out for Edna’s team, and finally they settle for the rather mediocre sounding app which gives out a range of sounds, whether it be annoying, congratulatory, or animal sounds. They call it Ampi-App, which is apparently a play on words, but I’m struggling to think what pun it is. Whilst the women drive off to get their ideas developed, Susan tried a bit of shit-stirring by bad-mouthing Edna, but Melody, who is sat next to her and practically draped in cheap make-up, isn’t having any of it and practically ignores her. 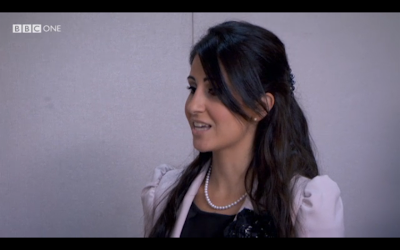 Could she look any more like a five dollar hooker?
In the boy’s group, four of them, Glen, Jim, Vincent and Alex cast themselves for the app, taking on a range of personas from cockney sparra, Scouser, Welshman, etc. The Wales soundbite is “has anyone seen my sheep?”, and the Liverpudlian one is “How’s your wife and my children?” which I found hilarious, but can see why people would find it offensive. Nick observes the boys indulging in laddish banter, not overly impressed, remarking he finds their product a little on the asinine side, “Unless I’m too old”

Back to the girls, their app is going into development and it really isn’t setting the world alight. Admittedly, the boys’ app isn’t the most inventive thing in the world either, but the girls’ one is dumb for a 13-year-old, let alone busy adults in a rush. “I think we could be heading for a bit of a disaster,” Susan remarks, and she is struggling to keep the glee out of her voice; one senses that she would take her team failing just to see Edna fail and get fired. 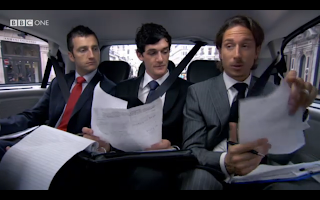 Overnight, the teams sleep whilst the computer boffins do their magic to put the ideas and components into the finished product. In the morning, the two teams work on their pitches. The boys team’s pitch is pithy and witty, albeit with a play on the word “app” too many. Leon, Vince, and Jim, suited and booted, get to the pitches, although there’s a bit of tension because Gavin clearly wanted to help pitch too. In terms of the pitches, they start fairly well, Vince initially taking centre stage, but at one point he fudges it up and Jim, cool as a cucumber, swoops in and rescues the pitch.

Jim is calm and collected in his pitch, and, furthermore, completely unafraid to address the difficult questions, which is that of taste; amusing as the boys team’s product is, it can’t be denied that it isn’t in the best of taste. There’s an awkward turtle moment when one of the men at the Online Magazine considering taking the app queries about the racial stereotypes, Jim denies as such. But what of the Australian man in the funny hat? “That’s just to show he’s Australian!” Jim protests. Er.

Over at the girls, Melody’s pitch is absolutely awful. She tries to butter up the company by giving them some stats about themselves; saying they have a following of 70-something-thousand. It’s actually several million, which the man isn’t at a lack to tell her. Fail. “The pitch is as good as the product,” Melody comments after she’s embarrassed herself, which just smacks of someone who’s getting their excuses in early.

The two teams then go online to see if their product has made it on the websites of the companies they have pitched to, of which there are three in total. The boys make it onto two of them, the girls, the remaining one, however, the website that they made it onto has a substantially bigger following than the other two.
The two teams then head to a technology expo , in which there are 500 bloggers, twitterers and technology experts, eagerly awaiting to hear about the two apps that the teams have on offer. Edna delivers the talk as if she’s selling some groundbreaking product, but from the reaction of the audience as well as the boys, who can scarcely believe their good luck, it isn’t that great. More pertinently, Edna fails to explain to the audience how and where to download the app from, which is, needless to say, quite a big deal.

The boys don’t make such a mistake, and their talk, in which two of the men have dressed up and take to their roles jovially, engages the audience a lot more. One dresses up as a Scouser, the other, a Cockney, and judging from the reaction of the audience, they’re loving it. The boys crank up the charm offensive by offering the audience doughnuts in return for downloading their app, which they show the crowd how to do.

So, all signs would seem to point to a resounding boys team success. However, it’s the figures that do the talking, and, in the boardroom, Karen and Nick are the ones with the figures. And, bombshell of bombshells, because the women come out triumphant winners, with 10,667 downloads, in the face of just 3,951 downloads for the boys. So that horrid, horrid women’s group, headed by the massively unlikable Edna and the two even more infuriating Melody and Susan, are treated to a delicious meal cooked especially for them. “Is that… victory I taste?” Melody asks, smugly. Urgh.

Back in the boardroom, the boys are as shocked as we the audience are to their failing. They had far more team rapport than the women from the start, I personally preferred their product (though an app that rates how smelly your faeces is would be more useful than the piece of crap the women came up with), and their pitches were more intelligent. But, humanity is an odd, odd thing, and the masses went with the women’s monstrosity. In the boardroom, the boys are in a hurry to lay blame with each other. Jim explains that he thinks the failing occurred when they didn’t get the deal with the bigger magazine, but Alan Sugar questions that even if they had gotten it, would their product have been downloaded anyway, as, whilst popular in the UK, it lacked global appeal. The boy’s Achilles heel in this challenge, I think, was their naivety.

Anyway, Leon, as project manager, has two pick two more people to bring into the boardroom with him. He contemplates picking Jim, which I think is an awful idea, and Jim also knows it, and isn’t afraid to defend himself, and that he does, vociferously. So Leon changes his mind, and goes with Alex and Glen. It was Glen’s idea for the project, and he picks Alex because he felt that Alex shirked his responsibilities. In the boardroom, Alex gets bold and bigger than life in fighting his own corner, but the wool isn’t pulled over Sir Alan’s eyes. He figures Alex, rightfully, I feel, meaning that Leon and Glen get to go back to the house, to live another day. App-solutely fabulous!
Posted by Emma at 5/11/2011 10:56:00 pm

Oh how pleased I am you have covered this - I just love it!! Edna and Susan will be soon out hopefully and suck up Melody will soon show her true colours! Going to look for your review on part 1 now, thanks will follow.

That was exactly how I saw things - amazing the girls won!

Hey yeh, I saw last night's episode and despite all the girls, with a few weak boys won! Guy out yet again!

Yeh well I don't think much of the girls despite their success to date (or the guys for that matter). If that's the best of British, the future looks vacant. Nice review.