She's on the right track baby, she was born this way

Flashback 4 years ago. I’d blagged myself tickets to a preview screening of Joe Wright’s Atonement, meaning that, I’d, rather smugly, gotten to see it before most of the British population, and I could not wait to gush about it on my blog. James McAvoy, according to me, was flawless, the score, musical genius, the cinematography and costumes, divine. However, I’d gone into the film expecting an acting masterclass from Romola Garai, and, whilst she was indeed very good, it was the younger incarnation of her character in the film – played by blue-eyed Irish lass Saoirse Ronan that really, really impressed. Briony Tallis is one of my least favourite literary gals of all time, yet Ronan’s depiction of her, whilst capturing how annoying and meddling her character was, managed to do something that I felt Ian McEwan was unable to do in his book – humanise her. It was, I felt, the most impressive performance by a child actress of the new millennium, and I went on to wax lyrical about her acting in The Lovely Bones, which, like Atonement, was a book that I didn’t particularly care for and wasn’t even originally intending on watching, but when I heard that Ronan was cast as the lead, I just knew that I had to. I had a whole list of problems with Peter Jackson’s film, writing, somewhat bitchily, “But the problem with that is that the source material, weak as it was, was so memorable because it was so dark, and in showing us montages of pretty yellow trees and giant penguins, we’re transported to this whimsical, child-like universe. Then Jackson tries to modulate the tone to child murders. It doesn’t really sit, to be honest, and if you were to ask me and my friends if we’d rather watch this film again or get murdered, we couldn’t truthfully say we wouldn’t pick the latter”, but Ronan was a shining star. When I first walked past the poster for Hanna in the London undergrounds, I checked my walk just to give it a second look (which, if you know Londoners, you’ll understand is saying something) when I realised that it was Miss Ronan on the front. Truth be told, there’s been a few too many female assassin films in recent years for my liking, but the fact that Saoirse Ronan was starring in Hanna meant that I knew I was gonna watch it. 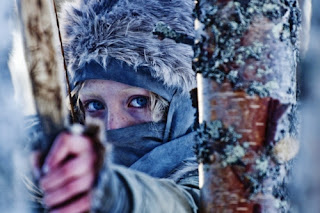 Quality-wise, of the film, I’d say it sits comfortably in between The Lovely Bones – extremely poor, and Atonement – excellent. One can’t help feeling that Joe Wright wished he could have made a more violent film, but was constrained by the need for commercial success – and hence the lucrative PG-13/12A rating. Indeed, some of the fight scenes are definitely the most violent scenes I’ve seen in a 12A rated film, but they are staged excellently, with a kind of gusto that reminded me of the jolly fight scenes in Pirates of the Caribbean (the first one, before they turned bad.) Eric Bana and Saoirse Ronan sport these bizarre sounding European accents that made it somewhat difficult to take the things that they said seriously, but in terms of bad accents, Cate Blanchett takes the biscuit. In fact, she should take the whole cookie jar in terms of poor acting, because the woman was not good. A lot of the casting in this film confused me, to be honest, and I’m torn between the joy of seeing some of my favourite stars and the confusion of seeing them in such poorly written roles. Nobody exemplified this better than Tom Hollander, who, if you remember, I loved so much that I went through an entire month of watching films with just him in. In Hanna, he plays a crooked sort of-Mafia character, and spends the film in the weirdest range of tracksuits that look like they've come from Primark (and at one point, these skimpy white shorts that leave nothing to the imagination, lol) and his German accent is so camp that I refuse to believe he didn’t do it with a lol inside his mind. I love Hollander and I love how he isn’t afraid to take a role and make it his own with silliness – his Mr Collins in Pride & Prejudice is one of my most endearing memories of his acting – but in Hanna, the fact that he’s meant to be a character to fear, yet he’s wearing all this Primark-style tracksuits and looking dangerously like he’s wearing mascara; it doesn’t all come together, really.

As with Atonement and Pride & Prejudice, the musical score is amazing. Dario Marianelli scored the former two, but his celli strings and piano surges may have been somewhat out of place in a child-hitman film, so the Chemical Brothers were employed instead, and, as with Daft Punk’s score to Tron, the aurals were so strong that it often made me forget about the pictures. One scene in particular, when Hanna is being pursued by Tom Hollander and his two not-altogether-very-effective goons near a building campsite and there’s a whole lot of running away on her part; the music is just incredible. 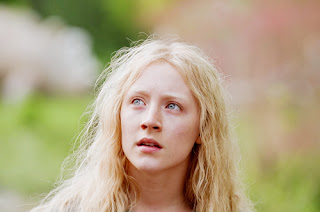 And of course, Hanna herself. The film begins with Hanna, out in the wild, shooting a dear for food. Her arrow wounds the deer and kills it, but, as she pulls the arrow out, she notes “I just missed your heart.” The screen fills with HANNA in white-and-red writing, to eerie effect, and without giving too much away, the symmetry around this gives the film a nice sense of closure. But to be honest, that’s the only sense of closure we get. Hanna sports more holes in a plot than a piece of Swiss cheese, and it gets to the point where I can’t just brush them under the carpet. But the main character is never not beguiling. Saoirse Ronan really does have the most electric, arresting blue eyes, and the camera picks up on that, and, indeed, much of Ronan’s subtle acting is in her eyes. Emma Watson should take note of this. The eyes, not the eyebrows, lady. :p And, although her character is a killer, it is, as the film points out, out of survival. There’s an engaging subplot in which Hanna latches on to a marauding bohemian family and their somewhat spoilt teenage daughter, Sophie. The blossoming friendship between the two is sweet and moving, although I felt the scene in the tent – in which the two share a Sapphic moment – was indulgence on Joe Wright’s part rather than any kind of strong storytelling. It’s a shame, because some of the more understated scenes between Hanna and Sophie were a joy to behold, and captured the dynamic of culture clashes and budding friendships well, and then that somewhat out-of-place lesbian undertone killed that off and made it somewhat ~laddish~ and seedy. The fight scenes were well-staged but on the storytelling side, I felt Hanna lacked depth. But even in the face of poor directing and poor writing, Saoirse Ronan is never not a queen. She is the film’s anchor, its emotional core, and without her, Hanna would be a fine, fine mess. As it was, it was managed to be a fairly interesting action thriller that was too flawed to take seriously, but definitely had some good things going for it.
Posted by Emma at 5/08/2011 03:23:00 pm

Getting in here before you realise and edit it:

"One can’t help feeling that Joe Hart wished he could have made a more violent film, but was limited by the need for commercial success – and hence the lucrative PG-13/12A rating."

lol yeah I just realised! I can't be arsed to change it, it can stay like that. :D

HOW COULD YOU BE SO NEGATIVE??

It's clearly one of the best films of the year, a crazily fun, exhilarating action film that has a beautiful coming of age story wrapped up with it. This is engaging, interesting filmmaking and it is a damn sight better than Atonement.

I agree with you on some points. Saoirse Ronan is brilliant in it, a fearless performance. Also Cate Blanchett is rubbish, but I'm struggling to think of a performance I've liked her in.

One note on the kiss. I'd say it was more sisterly than sapphic, with Hanna merely curious, exploring what a kiss is. She doesn't know kissing etiquette, and she loves Sophie so it seems appropriate. I really liked the arc of the friendship.

Course if it was sapphic then it would add to the idea that the whole film was some sort of metaphor for sexual awakening... :D

lol, it's the only film I've seen in the cinema this year (I'm really poor), so by default, it's the best. :p

Like me you seem unimpressed with 'Hanna', slow and tries far too hard

I enjoyed this movie immensely but wish it had not been supressed for rating purposes. Great review, thanks.

Unknown said...
This comment has been removed by a blog administrator.
3:48 am