William Shakespeare’s timeless tale of star-crossed lovers gets an animated makeover, with our characters now gnomes of two next door neighbours who hate each other – reds and blues. Gnomeo is a handy lawnmower racer and Juliet is desperate to prove she’s not “delicate” like her dad believes. Cast as the eponymous couple are two bright young British stars who also happen to be two of my favourites – James McAvoy and Emily Blunt.

From top to bottom, Gnomeo & Juliet is an unqualified failure. The in-references to other Shakespeare plays are forced and will be lost on their target audience anyway. None of the characters draw you in; one of the main things that appealed to me about the play was how Romeo was such a hopeless romantic, as well as Juliet’s sense of isolation and malaise.

Needless to say, by making their characters gnomes, we lose all sense of characterisation and they just become, well, cartoon characters.

This flaw would be easy to overlook were they at least drawn well, but the way every gnome resembles one another with very little distinguishing features just smacks of laziness. Each character is crudely rendered and has nothing interesting to say; at one point, Gnomeo makes a “let’s go kick some grass” line, which was funnier than first sixty times I heard it in other cartoons. The overall quality of the writing is extremely poor.

Furthermore, taking the Ocean’s 13 approach – cramming as many famous actors in to do the voice work just makes the endeavour even more embarrassing.

Ashley Jensen epitomizes this as Nannette, Juliet’s nurse figure. In this film, she’s a frog, and she loses all of the lovability she had as Extra’s Maggie. Emily Blunt and James McAvoy are left to do very little other than read their lines and pick up their pay checks without cringing too hard. 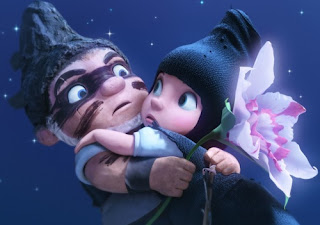 If I try really hard, I can find a few things I didn’t despise about this “film”. Jason Statham has good fun voicing the Tybalt character, and Michael Caine is less annoying here than he is in Inception.

To be fair, I greatly enjoyed Stephen Merchant belting out his version of Your Song, which was corny, but vaguely entertaining.

But to be honest, I couldn’t warn you off this film hard enough. It physically pained me to see Shakespeare being bastardized so much – Juliet’s spin on the “a rose by any other name would smell as sweet” was clearly scribbled on the back of a napkin.

Translating the spine of Shakespeare’s stories into children’s films can be done, as illustrated by the heavy Hamlet overtones in the masterpiece The Lion King. But for it to carry off, love and time must be invested into the project. Here, the amount of time making the film seems to be proportional to the time I would spend attempting to glue back a broken gnome; that is to say, very little time at all.

A final note -- if you amalgate James McAvoy and Emily Blunt's names, you get James Blunt.

I adore these two stars separately and I so hope so hard that one day they can collaborate on something that isn't such a piece of turd, but if you were to ask me to pick between listening to James Blunt sing or watch this piece of trash again, I'd probably opt for the former.

am final, I am sorry, but it does not approach me. There are other variants?

I laughed at the title out loud!! Shame it was disappointing, but thanks for a cheer-up laugh.

I like the helpful info you supply on your articles. I will bookmark your weblog and test again here frequently. I'm rather certain I’ll learn a lot of new stuff right here! Best of luck for the following! low cost auto insurance illinois

I love these types of movies - I enjoyed 'Ratatouille' so much, so will bookmark this one!

Unknown said...
This comment has been removed by a blog administrator.
3:49 am