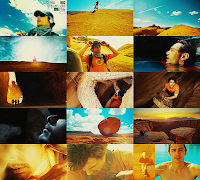 Hiya, I thought it’s high time I got my finger out and actually did some proper film blogging, haha. And what better way than to analyse each of the Oscar nominated categories? So, whilst I brush up on watching the remaining 2010 Oscar nominated movies that I need to watch, I thought I’d analyse the one category wherein I don’t need to watch the movies to analyse the category: best song. Of course, the whole aim of a song is that it’s supposed to epitomize the film, and in that case, having seen the film might improve my appreciation of the song, so in that case, 127 Hours and Toy Story 3 might be at a (dis)advantage. But I’mma try to analyse these songs from a purely aural point of view, ignoring context.

Oh yeah, and if you're wondering what the frick this is, it's basically me pretentiously rambling on about the things I love, the things I hate and everything in between in all the Oscar nominated categories (or just the ones I can be arsed with). Past examples: costume 2007 / score 2006 / supporting actress 2007 etc etc

A country music ballad as good as they used to make ‘em, Gwyneth Paltrow’s surprisingly mellifluous voice (check her out in her performance in Glee, covering “Forget You”, he sass and swagger gave me a newfound appreciation of the song and cemented its place as my favourite song of 2010) sings about finding love and one’s place in the world. Standard topics, then, but her belting out “H-oooome” in the chorus is so powerful that it almost evokes the nostalgia-type emotions that I get in listening to my personal favourite song about homecomings, Kanye West’s Homecoming. A.

02. We Belong Together / Toy Story 3
“When we're together/Gray skies are clearer./And I'll share them, till where I'm less depressed./And it's sincerely, from the bottom of my heart/I just can't take it when we're apart” go the sweet but very Disneyfied lyrics of Randy Newman’s Oscar nominated Toy Story 3 entry. Whilst not quite touching the heart quite as much as “You’ve Got a Friend in Me” did, it’s still an adorable song which can bung a smile or two on my face with its unapologetically uplifting lyrics. B+

A very pretty song, but emotionally, it doesn’t really do anything for me. It starts with the female lead singing a verse, then the male lead singing a verse, then, surprise surprise, the two of them fusing into a harmony. Musically, it’s hardly revolutionary, and, as with Randy Newman’s Toy Story 3 song, the lyrics are so massively Disney that it borders on tedious. The guitars, strings and piano chords are all very nice though. C.

04. If I Rise/127 Hours
Urgh. I’ll be analyzing Best Original Score tomorrow, wherein I’m not gonna bother hiding my disdain for 127 Hours bagging a nomination for its joke of a score. But yet another travesty is that it stained the Best Song category, when there really were many other more deserving songs that should have been nominated. Dido, on seeing how successful M.I.A. got with her super-swaggerous “O Saya” in Slumdog Millionaire, teams up with A.R. Rahman to wail away on this crappy song. I quite like Rollo’s vocals in the chorus, but Dido’s caterwauling and the bland lyrics are just disgraceful. E.

Who should win: Coming Home
Who will win: I legit have no idea! Um, If I Rise from 127 Hours?

Who should have been nominated: “Sticks and Stones” from How to Train Your Dragon, and that ain’t even a fucking question!!!!! Such a good song that it’s already been employed in a bunch of “2010: a retrospect” type montages, it sums up the film perfectly; highs, lows, and loving life. Terrifically fast-paced and with more life than an energiser bunny, this really is an adorably sweet song. I was also a fan of “Never Say Never” from The Karate Kid, though that is hugely due to Jaden Smith’s “no pun intended, raised by the power of Will” line. Lawlzswagger.

But yeah, “Sticks and Stones” from How to Train your Dragon is literally sublime. And that's an Emmabung kind of literally, not a Redknapp kind of literally. ;) Me and my bro spent all Christmas dancing around our house to it like the nerds we are. You’ll hear it on lots more awards shows and montages, mark my words, so you best download it here now so when your mates say “I wonder what song that is, it’s nice”, you can wow them with your trivia. ;)
Posted by Emma at 2/01/2011 06:19:00 pm

I found a great deal of helpful info in this post!