Right now, the Film Noir Blog-a-thon is occuring, hosted by the very brilliant The Self-Styled Siren and Marilyn Ferdinand. The blogathon is occuring as part of a fundraiser to raise money for The Film Noir Foundation, a very worthy cause which helps to restore classic films. Click here to donate.

When looking for a film to review for the blogathon, I couldn't decide between reviewing or re-reviewing some of my all-time favourite noirs (Sunset Blvd., Mildred Pierce, Laura, Double Indemnity to name but a few), or to watch something new. In the end I opted for the latter -- because why not watch a new film in the hope of discovering a new gem? -- and I picked the somewhat obscure 1947 Maxwell Shane picture, Fear in the Night. 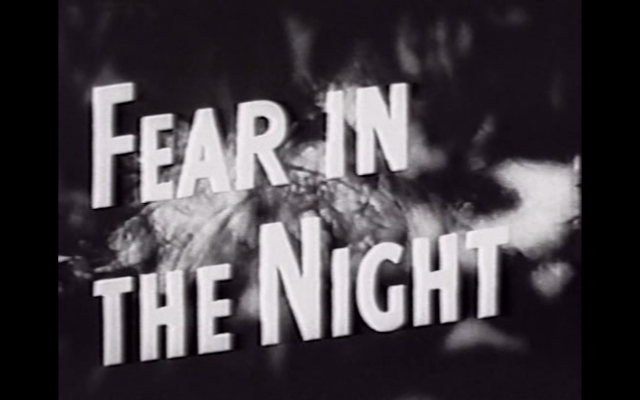 Vince Grayson (DeForest Kelley) dreams that he kills a man and when he wakes up he finds he has bruise marks around his neck from the guy trying to strangle him in self-defence. Seriously spooked out, he tries to hand himself into the police by telling his brother-in-law, Cliff, a cop, only to be told (quite fairly) that he cannot be arrested for a crime that he committed in his sleep, "you're dreaming. You've had those things before".

Unfortunately for him, that’s not the end of things, as he notices what he thinks is blood on his suit sleeve. It turns out to be only nail varnish, but even so, Grayson is so perturbed by the matter that he comes to obsessively chase leads on the murder he supposedly committed, as well as feeling déjà vu in various moments in life. 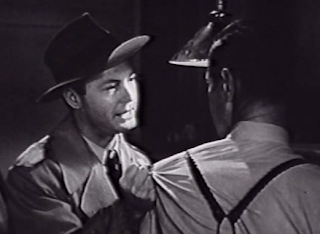 Fear in the Night is one of those good old fashioned films noirs, complete with ominous narration and a highly sinister string score. At just 70 minutes, there’s precious little running time, but the story is told neatly and completely during it. As the main character visits the room of mirrors that he saw in his dreams, the music score comes to a shuddering crescendo, putting a brilliantly creepy spin on the hall of mirrors motif.

DeForest Kelley is very good in the lead (this was actual his cinematic debut, he would later – at much older – star in a series of Star Trek movies), for the most part taciturn and surly, just how we like our protagonists in film noirs, but at the same time sympathetic enough and clearly a good guy so that we’re curious into his plight and wanting him to be innocent.

Kelley’s best acting occurs in the scene where he re-visits at the scene of the crime that he’d seen in his dream, and his confusion is excellently performed. He arrives there with his friend and brother-in-law Cliff, wherein the latter demands answers, not believing the excuse of having dreamt it.

As it transpires, it turns out that he indeed hadn’t dreamnt it – it had happened, but whilst our hapless lead was under hypnosis by the film’s true antagonist - master-hypnotist Lewis Belknap, and Grayson sets to prove his innocence by setting up another encounter by the hypnotist.

Due to it’s low-budget and relatively B-list credentials, Fear in the Night is not able to delve as deeply into the character’s minds as much as we would like. Instead, it is short and to the point; the only real action of the film occurs in a chase scene at the end. The film focuses more on the mental warfare involved and revolving around themes such as guilt and imagination.

Unlike other film noirs which have been told in flashback with discernible gaps in storytelling for us to piece together, Fear in the Night comes straight from the horse’s mouth, so we gather all the information as our main character does.

Not the most challenging of films, but as pulp noirs go, it remains highly entertaining and accomplished, especially considering its practically negligible budget.

You can listed your site to UK's best online business directory for absolutely free.

Looks like a classic video but worth watching! Is there a trailer for this film?