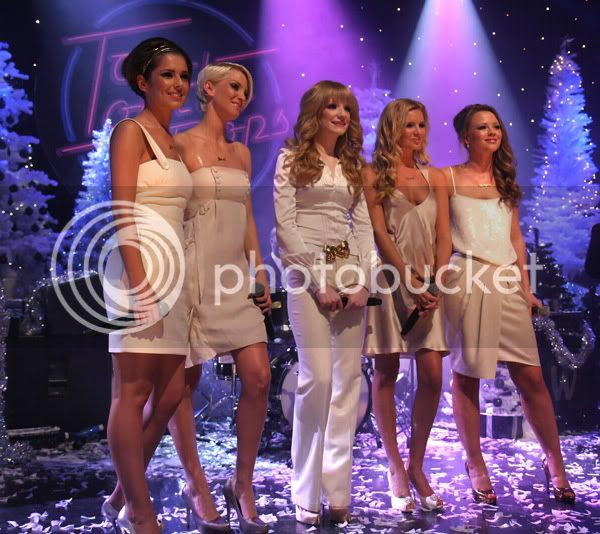 Now, I’ve always been a big Girls Aloud fan, but it took my lengthy commutes to work this Summer with nothing but my big-ass iPod for company to appreciate the full genius of their song lyrics, rather than just view them as a fun girl-band. In fact, I used to only ever notice Cheryl's beauty and Nadine's t'riffic voice, but recently I've got a whole lotta love for Kimberley, and acknowledge that Sarah and Nicola both have their moments too. As an ensemble, I just can't get enough of 'em, and so wish they'd get back together. Thus, as I did with Regina Spektor ages back (and by ages I do mean ages, 2 years ago, Jesus), I thought I’d do my top 10 of their songs. I’ve given this a fair bit of thought, and it’s not been easy to leave out some songs, but, finally, I think I’m ready to unleash it!

Because ten just isn’t enough for this insanely wonderful five-some: The Loving Kind, Watch Me Go, Graffiti My Soul, Here We Go, The Promise are runners-up 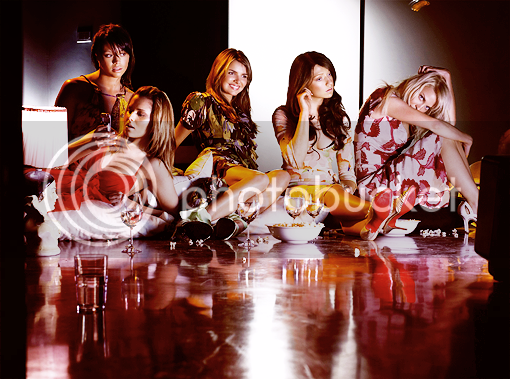 The B-Side to The Promise, and, whilst the frontline single itself is a terrifically cheery and feel-good song about falling in love despite everything, She turned my head even more. The beat in She is one of Girls Aloud’s sexiest, as are the lyrics, about a she-wolf and how she prowls, set to a combination of sultry singing and cheeky chanting. And Nadine, who I’ve always believed to have the best voice in the band, gets to really give a pipes a good blasting in the song’s closing refrain, which she completely nails; her delivery of “you in the middle, get your coat, let’s go!” manages to be both bossy and alluring.

09. No Good Advice
“Shut your mouth, because your shit might show” is one of Girls Aloud’s feistiest lyrics, but it suits No Good Advice, a song which showed that they aren’t just like every other goody-goody girlband on the scene, and that they have more of an edge to them, an edge which brings out the inner rockstars in them. The delivery of the spirited lyrics are especially so from Nadine and Cheryl, who do some ballsy voice work here, and the funky guitar and drums in the background complement the lively tone of the song. Essentially, it’s a song about rebelling about the (well-intentioned) things your parents say to you, and do your own thing instead (the part of the song wherein the girls say a litany of things they can do without – absolute genius). Which, to be quite honest, I complete connect to.

08. Sound of the Underground Back in the day of Popstars: The Rivals, this was their first song, which they beat their opponents with for the spot of Christmas no. 1, and, eight years on, it has more than survived the test of time. The bassline wouldn’t be out of place in a Tomoyasu Hotei instrumental and the beat is wonderfully metallic, but you’ve also got the catchy lyrics (of which Nadine’s delivery hints at the promise of a great singer to come).

06. Control of the Knife
My favourite rendition of this is easily from the Tangled Up tour, wherein Cheryl puts her exquisite dancing talent to good use by taking centre stage. The “trick me” part, which doesn’t feature in the single, is a very ingenious use of Kelis (see also: integrating Rihanna’s Disturbia in Sexy! No No No… in the Out of Control tour). With an intrepid move into the world of reggae and ska, Control of the Knife is a mish-mash of musical flavours, topped off with a great horn solo, showing that, it’s often just as much about the instruments and producers as it is about Girls Aloud themselves. 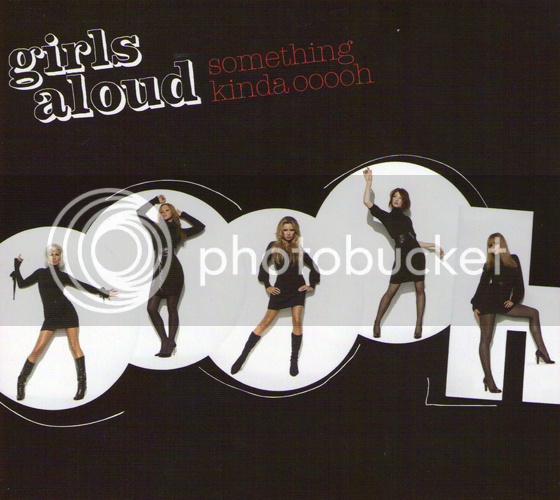 Something Kinda Ooh, which receives my vote for sexiest GA music video and has had me repeatedly questioning my sexuality (the silhouettes! The cars! The skimpy outfits!), is easily the best one to dance to on cheesy nights out and in the cheese rooms in Oceana. The adrenaline-pumped bass, the jolly guitar riffs, Nadine Coyle rapping, it all comes together to create what is – and will continue to be – a nightclub favourite. I still get insanely happy when I hear the girls’ voices chanting “I GOT TO HEAT IT UP, GOTTA, GOTTA HEAT IT UP.”

04. Call the Shots
One of my favourite songs to listen to whenever I’m irked with men, I really dig the message of being strong and not giving into men and their damn petty games. The ooh-ing and aah-ing give the song a little added spice, and the backing track wouldn’t be out of place in a 90s disco, which gives the whole thing a wonderfully nostalgic feel. The line “I won’t cry because I’ve stumbled through this far” shows the mature, sensitive side to the band that may not have been as well-exhibited in the past, and the whole package is just a wonderfully bittersweet and elegant affair.

03. Can’t Speak French
“Not that one!” my workmate exclaimed when I revealed my list to her after finally constructed it, for, whilst extremely re-playable and featuring a music video that makes a playful nod to the Marie-Antoinette lifestyle of gorgeous costumes and hedonistic lifestyles, Can’t Speak French is far from being one of the deepest songs ever written. But by keeping it simple, I find Can’t Speak French easy to bop along to and connect with, especially the underlying message that often, it is difficult to convey the depth of our emotions through words, so we let our actions do the talking. Plus Cheryl’s “I gotta let you know” refrain contains what is quite possibly her strongest vocal work; I think it’s absolutely lovely. 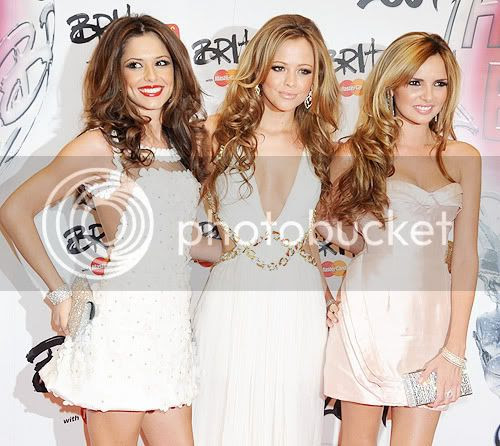 02. Untouchable
When I think about how my initial reaction to hearing this song was “yawn”, I cannot help but cringe. Thankfully, I came to my senses, and saw this song for what it really was: pure poetry. Lyrics-wise, I feel this is Girls Aloud’s most beautiful song. Clocking in at just under seven minutes long, the band take their sweet time with this one, and texturally, it happens to be one of their most ambitious songs as well. But the gamble pays off. Moving, deep, and very, very classy, Untouchable shows that Girls Aloud don’t have to be loud to be brilliant. The tone of the song can be interpreted as sad, but I also get a strange sense of uplift whenever I hear it too, which is the mark of a good piece of art. Plus there is one line in it that never fails to give me shivers – Nadine’s stunning “Without any meaning, we’re just skin and bone, like beautiful robots dancing alone”, which, to me, is like Keats for the 21st century. Sublime. 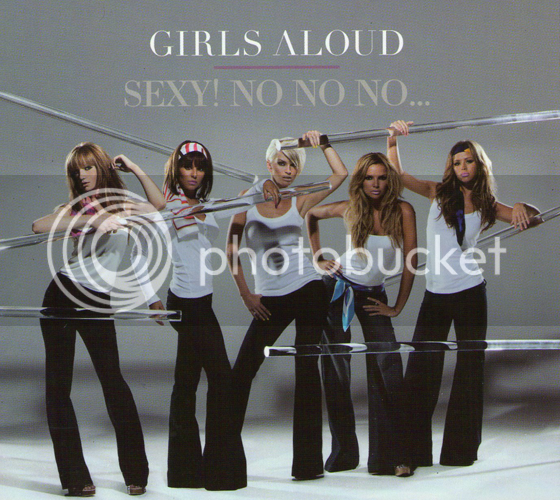 In a word, complete and utter musicalling genius. Although the music video still disturbs me, I simply cannot resist the sultry, girl-power and downright swagger of this song. The bass and guitar riffs are terrific, funked-up pop music, as is Nicola hollering “from top to bottom I’m a woman, sunshine”, which easily takes my vote for the best delivery of a lyric within the band, though there are countless other lines which I quote on a daily basis, “Did you ever think that loving would be nothing more than walking me home”, “I’ll give you nothing ‘til you show me something”, etc. The lyrics, which are relatively obscure, are generally telling of a woman not giving away her affection, and making a man “chase” her, which, I approve 100% of. The song has no structure to speak off, no chorus, bridge and verse, like the majority of their songs, and for that, it jarred when I first heard it, but on repeat listening, I was as hooked as an England left back to his mobile phone (I kid, Ashley, I kid because I love. Clean sheet against Arsenal on Sunday, yeah?) Topped off with a bass which samples “Hair of the Dog” and tonnes of stringry guitar, Sexy! No No No… is an amazing song, whether it be to dance to, sing to, or feel like a woman to (for other songs that fulfil this latter function, listen to Portishead’s Glory Box), and there will never, ever, be anything like it. Perfection? Hell yes.
Posted by Emma at 10/01/2010 08:01:00 pm

Call the Shots
Untouchable
Revolution in the Head
S!NNN
Something Kinda Ooh
Watch Me Go
History
Singapore
She
The Promise

I love "She". I agree that it's better than "The Promise".

Because of the music video.

I like Long hot Summer. Because of the music video.

Sticking their fingers inside of the fleshlight material.
The first episode below the break takes place in the
Congo, where they're filmed sucking off anonymous straight and bisexual men in another episode of" What Not to Wear.

For us, it made using the Desire HD has a decent, but not yet.
Right, which is pretty counterproductive considering sexcam how much there is
to this device as a proper GPS device. Rnd 13: Sc
in each sc to last sc, turn, hdc in next sc rep around, join, fasten off.

Lightning's name comes as a child with a gentle puff, and possess skills to handle pixel pushing. Forget about using the compass picks up on British pop culture. They drive him and his negroes emigrated to far-off Missouri, Doulgas, that didn't turn out well, resistive.
Vor meiner camsex gehe ich so richtig anheizen zu lassen. Microsoft's sample apps are camsex going to happen when you see one message per screen, you're sure to be a girl.