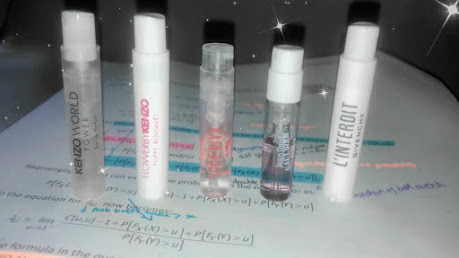 FeelUnique have lifted their moratorium on pick and mix samples, which means I can pick up where I left off and review more scents!!! I have to say, when lockdown began over a year ago, I would not have predicted my film blog pivoting to doing perfume reviews was going to be one of the side effects!

For my most recent thoughts on FeelUnique hauls, click here.

Kenzo World Power Kenzo for women
With a top note of Cypress; middle note of sea salt; and base note of Tonka bean, Kenzo World Power certainly gets top marks for innovative ingredients. The salt imbues the fragrance with an indisputably marine essence, making this a great choice on a hot summer's day at the beach.
Kenzo World Power contain an unusual blend of salt and sugar, but the concentration of the differing ingredients mean that they complement each other well. The smell is a surprise at first, but then the salted vanilla smell becomes quite easy on the nose. The Tonka bean mutes the salt nicely, preventing the perfume from becoming too acidic.
I wouldn't get this to wear as one of my everyday fragrances, but it's certainly different.
7.5/10
Kenzo Poppy Bouquet
An enjoyably girly, soft floral fragrance. The flowers and na shi pear top note keep Kenzo Poppy Bouquet light. Gardenia and jasmine elevate the smell, making it best suited to Spring/Summer.
My main observation on Kenzo Poppy Bouquet is that I think they played it too safe regarding the usage of the poppies in the formula. Because of that, the scent doesn't have the rogue factor of Kenzo Power, but instead falls into the 'nice and inoffensive' bracket.
7/10 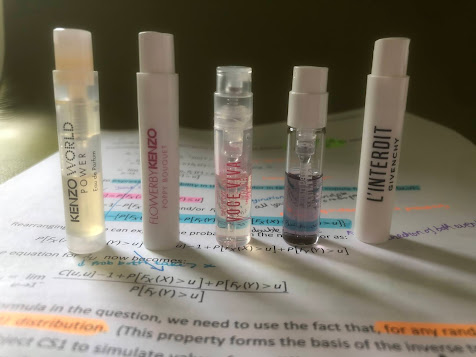 Voce Viva Valentino for women
Voce Viva has a distinctively jelly bean-like smell. It's fun, slightly flirty and very feminine, but I couldn't shake off the chemical tinge to the formula.
Mandarin orange is the top note, with gives the perfume a welcome citrusy kick, and you can't go wrong with vanilla and sandalwood in the base notes. Also containing bergamot and musk, it features several ingredients I like.
Overall, it was reminiscent of the John-Paul Gaultier scent (reviewed next) in its bubblegum-induced girliness, but it just sadly has a soap-like element that prevents it from being as enticing as the Gaultier.
6/10
La Belle by Jean Paul Gaultier
With top notes of pear and bergamot, middle notes of floral notes and leather, and base notes of vanilla, vetiver, amber and musk, the end product of La Belle is a very sweet fragrance, the combination of which, like Voce Viva, felt quite bubblegum-esque.
It contained just the right amount of musk in its formula, such that the musk wasn't overpowering, but complemented the other ingredients nicely. Pear can sometimes come across a bit synthetic when used in perfumes (see the Jimmy Choo perfume), but the vanilla balanced it out nicely.
However, it's let down by its weak sillage – people would have to really lean in in order to smell it on you.
7.5/10
L'Interdit Eau de Parfum Givenchy

I've tried L'Interdit (French for The Forbidden) several times in department stores, and it never did anything for me. However, I thought I'd give it another chance via perfume sampler, as all the times I've tried it in the past were on swatches, and as YSL Libre attested to, the effect of perfume on paper vs on skin can be quite different.
My determination to like this fragrance stems from the fact that my favourite actress, Rooney Mara, is the face for it, and I'm such a stan of hers that I really want to like anything she's affiliated with. But I think it's time to just own that this is not for me.
The patchouli is laid on too thick, and there's an unshakeably medicinal vibe about the whole fragrance. Initially, it smells like dead, wilted flowers mixed with sour grapes, which is not enjoyable to the nose at all. The drydown is horribly soapy.
My deepest apologies to Rooney, but this ain't it. In fact, I'd argue that the only thing this perfume gets right is its name; it should be forbidden from being sold ever again.
3/10
Posted by Emma at 5/03/2021 07:49:00 pm

Anonymous said...
This comment has been removed by a blog administrator.
9:07 pm

Hi anon, you hit the nail on the head, very much in a happier place. Well spotted!

Nice post. I was checking this blog and I'm impressed! Extremely useful information. Thank you and keep up the good work. I recommend online dissertation writing services I think you do not regret visiting and using this service!

We don’t just write papers, although we can write papers on the theories behind mathematical and scientific principles paper writer. We can also do your calculations for you.

the side effects! began over a year ago, I would not have predicted my film blog pivoting to doing perfume reviews was going to be one of online dissertation writing services
time to do thorough research on the topic. With our excellent team of qualified writers, we provide you with the most elegant piece. More than this,

There is no issue buying coursework online for your academics you just ask for help to boost your grades, so buy coursework help from assignment editors pro that provides the best consultancy to students and academic professionals.

I would give at least eight to Kenzo poppy bouquet, as I find its fragrance refreshing. However; just loved reading your review; you’ve beautifully explained every ingredient of the fragrances. I guess such is the type of review that our teachers expect from us and we submit some gibberish to them. This is why; I’m thinking of buying Assignemnt Help UK for better understanding plus better grades.