Due to work and exams, I've not seen as many of the 2021 in contention films as I'd like to (this has pretty much been the party line since I started my job in 2018, aha). But I have been keeping my eye on the bloggers and prognosticators, seeing who won the pre-cursors, as well as watching the BAFTAs.

Thus, I feel well-equipped to at least make a valiant stab at who I think will win!
Best picture: Nomadland
Best director: Chloé Zhao, Nomadland

Chloé Zhao and Nomadland have taken the top two prizes at almost every precursor award, so I think these two wins are currently locked.
Of the BP nominees, I've currently only seen The Trial of the Chicago 7 and Promising Young Woman, although I'll make my way through the other titles now that exam period is over (which means I have to force myself to sit through Mank, sigh). Promising Young Woman is currently my favourite film of 2020, so I hope it doesn't walk away from the Oscars completely empty-handed!
Best actor: Chadwick Boseman, Ma Rainey’s Black Bottom

The late Boseman won the Golden Globe, Critics Choice and Screen Actor Guild award for his moving performance as a trumpeter who has been treated badly by life.
There was a late sting in the tail when BAFTA opted to award their countryman, Anthony Hopkins over him, and the Independent Spirit Awards rewarded Riz Ahmed over both of them.
Those two events suggest that Boseman winning might not be as locked as we originally thought. But I'm still predicting him, because SAG tend to be the strongest prognosticator for the acting wins, and I also think it would be very bad optics for the Academy not to reward Boseman in their last chance to do so.
Best actress: Carey Mulligan, Promising Young Woman

With no clear frontrunner, Best actress has been the most exciting category of the awards season. Things all started when Andra Day won Best actress at the Golden Globes (I, like many others, incorrectly guessed Carey Mulligan would).
Mulligan then did receive a prize, at the Critics' Choice Awards. Viola Davis won the SAG. And Frances McDormand won the BAFTA two weeks ago, where, weirdly, neither Mulligan nor Davis were even nominated. Then, this week, Carey Mulligan won the Independent Spirit Award, where she was up against McDormand and Davis.
Statistically, that suggests the tide is in Mulligan's favour. But there are arguments for any four of the aforementioned actresses winning. Andra Day's performance in The United States vs Billie Holliday has been likened to Renee Zellweger's turn as Judy Garland in Judy, which she won the Oscar for last year.
Viola Davis and Frances McDormand are acting powerhouses. Awarding Davis would be a nice way to honour Boseman in spirit, again, as most of the fun of Ma Rainey's Black Bottom was in watching the two of them lock horns. McDormand is starring in the Best Picture frontrunner.
However, both Davis and McDormand already have Oscars, the latter with two, and having won just three years ago for Three Billboards. Giving her a third seems a bit generous, especially as Carey Mulligan, who gave the finest turn of her career in Promising Young Woman, is yet to win one. I'm hit-and-miss with Carey Mulligan performances – I thought she was very good in An Education, but found her annoying in The Great Gatsby and Drive.
But in Promising Young Woman, she had a perfect comprehension of the tone that Emerald Fennell wanted from her film, and captured Cassie's damaged psyche so well, that you routed for her, despite her character's questionable actions. So Carey Mulligan would be my personal pick (although I also love the sound of 'two-time Academy award winner Viola Davis'), and hope she prevails here!
Best supporting actor: Daniel Kaluuya, Judas and the Black Messiah
British men called Daniel have talent… unless they're hypocritical creeps who write for The Athletic! #IfYouKnowYouKnow 😂😂😂 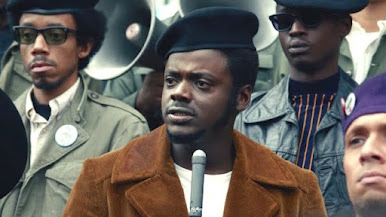 Inside jokes aside, I am over the moon for Danny. I've followed his career ever since I watched him in the 15 Million Merits episode of Black Mirror, and he's gone from strength to strength ever since. He moved to the States because there weren't enough opportunities for Black actors in the UK, and since getting the lead in Get Out, which he got a Best actor Oscar nomination for three years ago, his profile has been ever-increasing.
The Academy weirdly categorised Lakeith Stanfield's lead performance in this film in the supporting category as well, meaning Kaluuya has internal competition from his co-star. But even that won't stop him from picking up the award in Hollywood tonight. He took the Golden Globe, Critics' Choice, SAG, BAFTA, and now he's coming for the Oscar.
Best supporting actress: Yuh-Jung Youn, Minari
The Golden Globes threw a spanner in the prediction works when they gave Jodie Foster the win here, but following the GGs, it was a fairly straightforward road to the Oscars for Youn, who picked up the SAG, BAFTA and Independent Spirit Award.

In her BAFTA acceptance speech, she brilliantly called the British 'snobby'. Whether that was due to something being lost in translation, or nerves, it was utterly brilliant, and a enjoyable display of seeing an actor neg the awards bodies, rather than kissing up to them.
I will say that I think Youn's smooth route to the Oscars this year may be due to some residual Parasite guilt. Last year, none of the actors from Parasite got nominated for individual Golden Globes, SAGs (although it won Best Ensemble there), BAFTAs or Oscars. This is clearly an insult to the Korean actors in the film, especially as Parasite ultimately picked up Best Picture. The film's high-jinx and plot twists didn't deliver themselves; the actors were a big part of what made it so special.
The Academy have an ugly history of ignoring East Asian actors, and that will certainly have played in voters' minds when they voted for Youn. So her win, deserved in its own right, is also a symbolic mea culpa from the Academy, to all the East Asian actors who were snubbed over the years.
Original Screenplay: Promising Young Woman
I think this will come down to a battle between The Trial of the Chicago 7 and Promising Young Woman. Being an Aaron Sorkin script, The Trial of the Chicago 7 was plenty talky, with all the characters raising the right talking points at the right time. It almost felt too… right, and on the nose. And lacked authenticity.
Promising Young Woman also has its detractors, due to being about a woman's mission to teach bad men lessons. The Oscars also have a rocky relationship with complex female leads. If a woman in a film is evil, the Academy prefer her to be and out-and-out villain a la Kathy Bates in Misery or Louise Fletcher in One Flew Over the Cuckoo's Nest.
If the female lead is damaged and does morally ambiguous things, but that's a consequence of mistreatment that has been meted out to her by men, like Cassie in PYW, and Amy in Gone Girl, they're far less receptive to the film (Gone Girl only got one Oscar nomination for Rosamund Pike, when everyone thought it was a lock for Screenplay).

So that's what might work against Promising Young Woman. But PYW wasn't just a one-dimensional Baise-moi type man-hating vehicle. There were scenes were characters who'd played their part in upholding the patriarchy were shown to have realised the consequences of what they'd done and repented (such as Cassie's encounter with Alfred Molina's character, one of the film's strongest scenes).
The film is shrewd enough to see that to there's definitely a part for men to play in smashing the patriarchy, once they accept what the right thing to do is.
I think PYW contained the right mix of cynicism and hope. That, combined with the film's original concept, is what leads me to believe it will prevail in Original Screenplay.
Adapted Screenplay: The Father
I finished watching The White Tiger last night, and thought it was a thrilling ride, and makes for a great companion piece to Parasite in how it conveyed the gulf between the have and have-nots. That would be my personal choice to win in this category, although this is caveated that I haven't yet seen The Father, which critics have reported is well-written.
Animated Film: Soul
Production Design: Mank
Costume Design: Ma Rainey’s Black Bottom
Cinematography: Nomadland
Editing: Sound of Metal
Makeup and Hairstyling: Ma Rainey’s Black Bottom
Sound: Sound of Metal
Visual Effects: Tenet (urgh, what a crappy film)
Score: Soul
Song: Speak Now, One Night in Miami
Documentary: My Octopus Teacher
International film: Another Round
Animated Short: If Anything Happens I Love You
Documentary Short: Colette
Short film: Two Distant Strangers
Posted by Emma at 4/25/2021 03:41:00 pm

You got almost everything correct. Lead Acting, Cinematography, and Song are the only ones you predicted incorrectly. I have not seen many movies last year, but in retrospect, Anthony Hopkins was a predictable choice because he played a character with dementia. It was weird that Best Actor was awarded last. It made it seem like the Academy wanted to end the ceremony with a tribute to Chadwick Boseman. It was pretty anti-climatic.

Nomadland was the favourite contender, so it made sense that Frances McDormand won again. I also didn't like Tenet. It felt like it was made by a different director who wanted to make a movie as clever as Inception. Between Once Upon a Time in Hollywood to Mank, do you hate period pieces about Hollywood? Just curious.