I was so delighted that Parasite rightly won Best Film and Director at the Oscars this year (as you can probably tell by me proudly wearing their merch!), that I had an informal victory lap in its honour. This involved having several drinks celebrating its win, but the most specific bit of celebrating I did was dining at a Korean restaurant, Kimchee.

Sadly, Kimchee did not serve the ram-don that was made so iconic by the thrilling scene in the movie, but it did serve bimbimbap, kimchee, pajeon, and various other staples of Korean dining, so I was excited to visit it, hoping that it would join On the Bab, BimBimBap and Gogi Korean Bar and Grill in the pantheon of fabulous Korean restaurants I’ve visited in London.

But this wasn’t to be. The food at Kimchee was awfully overpriced for what it was: 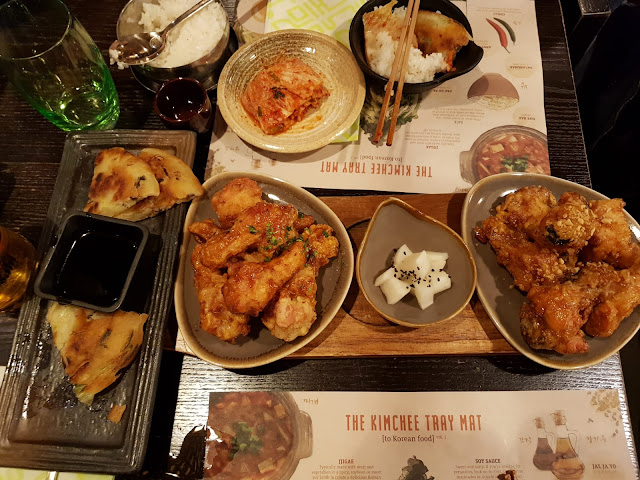 Those portions of kimchi are tiny, yet it cost £5!


The service was as bad as the food was overpriced. We ordered pork belly, but it didn’t arrive until about half an hour after all the other food did, which meant we had to eat the pork on its own, and were unable to enjoy it mixed with the flavours of the kimchi and the other sauces, which is the optimal way to dine.

The fried chicken wasn’t a patch on On the Bab’s. Where OTB’s is flavourful and succulent, the chicken here was dry and drab. On the Bab is also generous with their sauces, whereas here, the seasoning is so miserly that the chicken ends up tasting rubbery and flavourless. The pancake was also dry, and didn’t even seem to have any of the special seasoning that differentiated it from a generic plain pancake (see BimBimBap for how pajeon should be done). 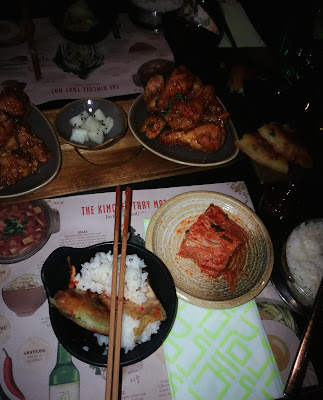 The seating experience was also poor. Kimchee has a canteen-style layout, similar to many restaurants in London. But the fact that the restaurant managers merely view their customers as walking pound signs couldn’t be clearer by the fact that they seat you with other parties, so, even if you try your darndest to focus on the person opposite you, you find yourself hearing other peoples' conversations.

The food orders also do not get any clear delineation on which side of the table it belongs on, rather, it’s lumped down arbitrarily where the waiters feel like it.

Overall, I left Kimchee feeling ripped off and malnourished.

So, it is a crying shame that I couldn’t toast Parasite’s Best Picture win in a restaurant that was worthy of the film. I should have gone to On the Bab instead – now that’s a restaurant that evokes the respect that Parasite deserves.