Part 1 of the blog was here! As I've written longer mini-reviews for the top five this year, but don't intend on writing a full review of the first-placed film (like I did last year with Dunkirk #twinksonabeach), I'm going to divide coverage of the top 5 as a 3:2 split!

Yorgos Lanthimos made my personal top 5 of 2017 for his deliciously wicked take on the Greek tragedy, The Killing of the Sacred Deer, and he does the business again with another amoral morality tale, although of a very different flavour.

Queen Anne (Olivia Colman), is ageing, frail and sick, so her statesmanly duties and decisions are run on her behalf by Lady Sarah (Rachel Weisz), her sharp-tongued but caring lady-in-waiting. The two also happen to be furtive lovers.

This cosy dynamic is thrown into disarray when Abigail (Emma Stone),

Sarah's cousin, who has fallen on hard times due to her father gambling away their family fortune, shows up at the palace, looking for a job. Immediately, the shrewd young woman spots the queen's predilections and fractures in her relationship with Sarah, and sets about usurping her as Queen Anne's favourite.


The power struggle between Sarah and Abigail is engrossing, as the two women wield their wiles over each other, and the balance of power shifts between them as frequently as does the audience's loyalties.

The performances in The Favourite are what make the film so much fun. Olivia Colman, somewhat of a surprise Best Actress winner at the Oscars this year, is wonderfully deranged, but her bonkers is underscored with sadness; she had several stillborn children, and now houses many rabbits, each one representing one of her miscarriages.

As Abigail, a conniver in the vein of Machiavelli, Emma Stone is very convincing. (Almost too convincing). She puts those huge Özil eyes of hers to good use, creating the perception of being a guileless ingénue, when in fact, she will resort to whatever underhand tactics required to to get her way.

And then there's my favourite (see what I did there?) turn in the film, Rachel Weisz. Her Sarah has a cold, terse demeanour, but deep down, she truly cares for Anne. Weisz displays this duality with sensitivity and nuance, whilst happily sinking her teeth into some of the film's best, most mordant lines.

Like The Killing of a Sacred Deer, The Favourite is clearly a proponent of the misdeeds of your past coming back to bite you in the arse, in the most ironic way possible, and this is epitomised with the film's haunting, but savagely salient, shot.

And naturally, I'm going to be a staunch advocate of any film where Emma Stone gets exactly what she deserves at the end.

Simon Spier is a 17-year-old boy living in Atlanta (this makes Love, Simon the second film in my top 10 of 2018 to be set there - is that a first?). He has a loving family, great friends, and is reasonably well off. Overall, he's content with his life.

However, he's harbouring a secret: he's in the closet. On the school's anonymous Tumblr account where people can submit e-mails under a pseudonym, he discovers there's another closeted gay student at his school, by the name of 'Blue'. Simon begins to write to Blue under his own pen-name, 'Jacques', and through his everyday interactions with classmates, Simon tries to discern the identity of his pen-pal.

Love, Simon is a big-hearted teen comedy with a knowing hat-tip to the '80s High School films of John Hughes, as well as a freshness and modernity of its own. For the most part, the film keeps it light and witty, portraying Simon as just a regular teen who happily goes about his life, rather than someone who's weighed down by the gravitas of his secret.

But when things get real, the film is unabashedly emotional - a late act sting in the plot has someone outing Simon, and when that happens, the difficulties of being different, even in today's ostensibly progressive society, are painfully felt. A scene of homophobic bullying in the film brought me to tears.

But such is Simon's cheery resilience, his supportive network of friends and family (Jennifer Garner gives a beautiful performance as his understanding mother, making it two years in a row that Hollywood has conveyed kind parents of LGBT teens), and the film's optimistic belief in the innate goodness of mankind, that Love, Simon is overall a bright, life-affirming watch rather than a solemn one.

I would like to think this film has encouraged teenagers across the world, whatever it is that makes them different, to follow Polonius' sage words, and to thine own self be true.

Based on the true story of Ron Stallworth, the first black police officer in Colorado Springs, who infiltrated the KKK by pretending to be white, Spike Lee's film is as audacious, entertaining and soberingly contemporary as you would expect. 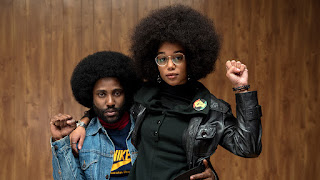 John David Washington (showing that he has inherited his father's screen presence and charisma) plays Ron, an idealistic young cop, who genuinely believes he can reform the racist police system from the inside. When he spots an ad for the KKK, partly out of morbid curiosity, partly out of mischief, he calls them up, taking on the guise of a potential recruit. The person at the end is David Duke, and over the course of several phone conversations, he is fooled. Taking to Ron's white alter-ego, Duke invites Stallworth to a face-to-face.

At this point, Ron implores his colleague, Flip (Adam Driver), to do the right thing, and go on his behalf. Flip is understandably wary of the dangers involved, but Ron argues that, as a Jewish person, he too, should have 'skin in the game', and take some calculated gambles for the greater good of exposing hate-inciting racists.

Soon, Flip, as 'Ron', is let in on the KKK's plans for an upcoming attack, and in the face of fellow cops who won't support (or even believe) him, Ron must use all his guile, resourcefulness and a large injection of bravery, to protect all the African Americans at risk, which include his love interest, a passionate activist called Patrice (Laura Harrier).

Some critics have criticised BlacKkKlansman for lacking subtlety, but I would argue that this searing film, so full of righteous indignation, cannot be told in a subtle way. Lee navigates the tonal shifts in his film, going from comedy to jeopardy with the same level of aplomb as Jordan Peele did with Get Out.

But as the disturbing closing shots of the film illustrate, racism is no joke.

Hmm it looks like your blog ate my first comment (it was super long) so I guess I'll just sum
it up what I had written and say, I'm thoroughly enjoying your blog.
I too am an aspiring blog writer but I'm still new to everything.

Do you have any suggestions for rookie blog writers?
I'd genuinely appreciate it.

Undeniably imagine that which you stated. Your favorite reason appeared
to be at the web the simplest thing to be mindful of. I say to you, I definitely get irked even as other people think about worries
that they plainly do not recognize about. You managed to hit the
nail upon the top and also defined out the entire thing without having side effect , other people can take
a signal. Will likely be back to get more. Thanks