As part of my job, I have to sit actuarial exams in tandem to working. I sat CM1 and CS1 in April, and CS2 in September (the M stands for Maths and S stands for Statistics). I have had the good fortune of having passed all three exams I sat this year (hence the rather extravagant Christmas present I got myself), but luck was only a small factor in why I was successful. John Lee, who’s expert tutelage I received for the two Statistics modules, played a huge part. 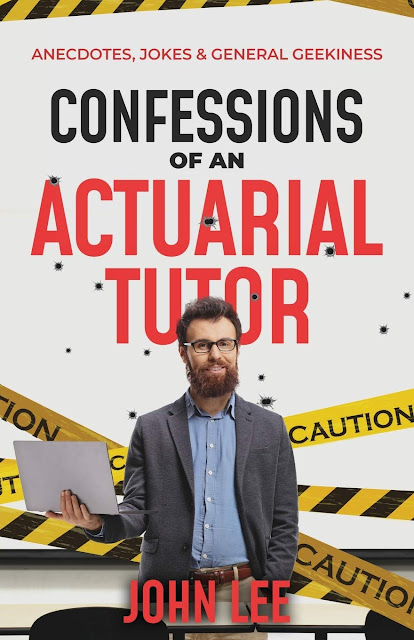 That's not him btw.

His new book, Confessions of an Actuarial Tutor, is a compendium of amusing things that happened to him in his ~20 years of teaching actuarial students. For anyone who’s ever met John, he writes as he speaks: a mixture of gallows humour, self-deprecatory banter, nerdy mathematical jokes and a sprinkle of that unique John Lee eccentricity.

John Lee thumbnails the goods, the bads and the uglies of teaching. We quickly learn that one of the greatest difficulties in being an actuarial tutor is the circumstances surrounding it: most of the students (and I’m definitely speaking from experience here) work in demanding financial jobs, with their evenings eaten up, either with work, or social commitments. This means that tutorials tend to fall towards the bottom of graduates’ priority lists, with students not having done much (if any) preparation for the classes.

The challenge for Mr. Lee, then, lies in inspiring a group of students, who don’t seem particularly ready to be inspired. Students leaving the tutorial half an hour early, being tardy for class, or not even bringing the required study equipment are not uncommon occurrences, and the book made me laugh a lot in how John uses humour to combat all of these less-than-ideal scenarios.

Furthermore, having had all those years’ experience, this is not John’s first time at the rodeo. So students who try to push their luck in tutorials with uncooperative behaviour, find that the brilliant John Lee has seen it all before, and is always three steps ahead of them.

This life experience means that he often has the students' best interests at heart, and more fool those who do not heed his sage advice. One chapter, about a girl who wanted to attempt the questions with the solutions, seemed to have her ignore John's suggestion to practice questions without them. For her name was, unsurprisingly, missing from the pass list.

In the novel, we discover that the drawbacks of the job extend beyond apathetic students. These come in the form of cramped venues, poor remuneration for marking exam scripts, and people in online tutorials being unresponsive. But, as with every event in the book, John recounts these with his usual cheerful resilience (and a healthy smattering of digs at accountants. Which as someone who has devoted their 2019 to studying for seemingly-intractable maths exams, I am fully here for).

Whilst the jokes in the books are likely to go over the heads of anyone who’s not an actuarial student, they thoroughly amused me. My absolute favourite was the time series of students’ concentration during a time series tutorial, so funny in its accuracy. Graphs and graphics are employed sparingly, but effectively, throughout the book, which I read speedily over the course of a Christmas Eve evening, giggling throughout. After all, it feels just like a personal chat with John!

Confessions of an Actuarial Tutor is clearly a very personal book to John. After all, teaching, and all the add-ons that come with it, is what he spends a large proportion of his life doing. His anecdotes, however silly, are entirely veracious – I’ve been there when he’s delivered several of the punchlines in the book.

Amidst all the breezy repartee, he touches upon some heartfelt issues about his life which I never would have guessed, given his sunny disposition. This underscores the frequent high-jinks of the novel with a bittersweet resonance.

But anyone who’s ever met the man will know that his strength of character will see him through any darkness. As the daughter of a Professor myself, I know first-hand how horrifically overworked and underpaid educators are. John recalls rare occasions when students have invited him to the pub, or thanked him with gifts and cards, and it clearly meant the world to him. So if you ever have the pleasure of having a great tutor, do make sure you express your gratitude to them.

Your kind words of support and encouragement mean more to them than you’ll ever know.

Denial said...
This comment has been removed by a blog administrator.
3:05 am

zaheer said...
This comment has been removed by a blog administrator.
8:55 am

caris said...
This comment has been removed by a blog administrator.
11:25 am