Across the road from Waterloo station, there are several dining options for those who are starved, following an arduous train journey. As I mentioned in my Azzurro review, that is a godawful place which you should avoid like the plague; you'd be better off buying some fried chicken from one of the fast food places nearby. The Archduke, just about two minutes walk from Azzurro (so named because it is situated under the railway arches), represents a far more palatable alternative. 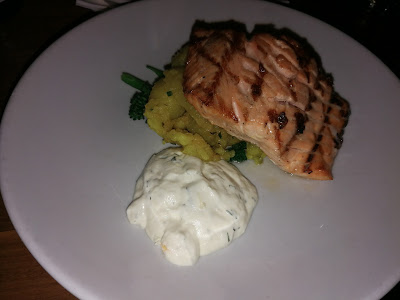 I had the salmon steak. At £17, it may compare rather unfavourably to the salmon teriyaki bento box from Eat Tokyo, but in truth, most things would compare favourably to that bargainous restaurant! As the picture shows, the dish isn't particularly plentiful, but it was marinated and seasoned to perfection, and the soft flakes melted delightfully in my mouth. My friend had the sea bass filet, and she was equally pleased with her choice.

It didn’t surprise me to hear that some people come to The Archduke to drink rather than to dine, because the wine list is magnificent. Reds, whites or bubbles, whatever your tipple, there is guaranteed to be something to appease your palate. With our seafood mains, we shared a carafe of Château Sauman from Côtes de Bourg, Bordeaux, and then after, we had red wine: the Albarino ‘Rias Baixas’  from Condes de Albarei, Spain. Two wonderfully earthy, European flavours, which washed our dinner down marvellously.

The Archduke has a refined, laid-back vibe, with a grand piano on the first floor, which a pianist played mellifluously throughout the night. This, coupled with the great food and drink, means that our time spent here was very enjoyable indeed. The final bill came to £77, which is more than I'm usually willing to spend on dinner out with a friend, but such was the understated elegance of the place, that I'm willing to let The Archduke off.

For better bang for your buck, check out the deals on OpenTable or Groupon for deals; my friend and I dined at Hawksmoor last year for a similar price, and had starters, mains and dessert, as well as glorious cocktails each.