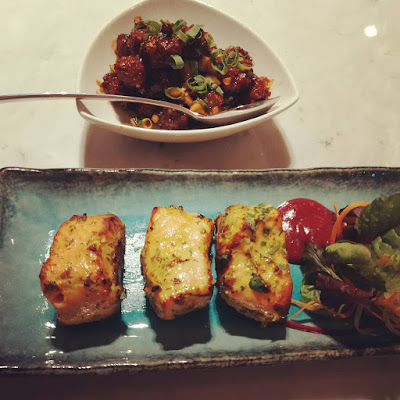 Having just opened earlier this month, Masala Dabbas aims to bring authentic Indian dining to Orpington, on a High Street that is filled to the brim with 'Indian' dishes that have actually been liberally doctored to appease western palates.


Poppadoms are on the house, as per standard. What was unusual about the poppadoms served here, however (pictured below), was that they came in a range of shapes and sizes, and several of them even had food colouring applied! The dips went fabulously with the starch, and the curved shape of the rainbow poppadoms allowed the eater to coat the surfaces in the wonderfully moreish mango chutney. 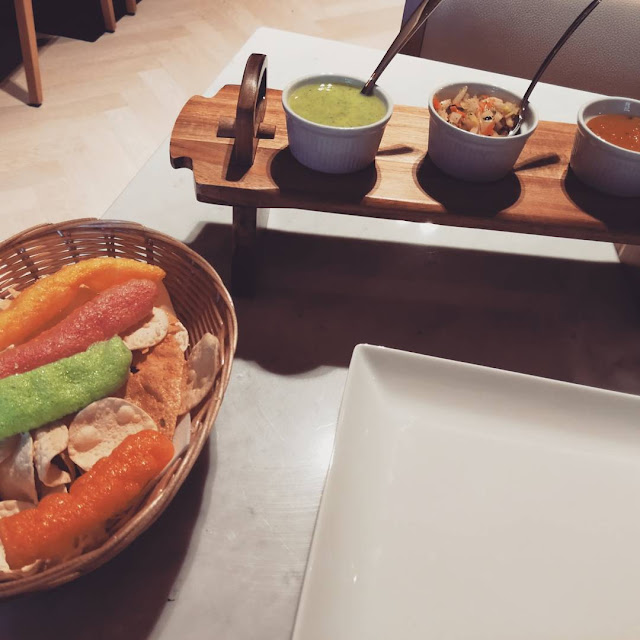 The starters at Masala Dabbas aims for nourishment and quality of ingredients, rather than filling the diner up as quickly as possible. The Indian-spiced salmon had been carefully de-seeded and seasoned, and the subtle sprinkling of garlic really enhanced its flavour, without the need to coat it in unnecessary fats. Texture-wise, the salmon had a coaxing crust on the outside, yet was succulent and tender on the inside. All of this meant that the fish, especially when dipped in cranberry juice, whetted one's appetite for the main meal perfectly.

The vegetable manchurian was made by balling together chopped up cabbages, cauliflowers and carrots and then covered with a tangy sauce, as well as some spring onions. They were delicious, and so easy to gobble up, the little balls of goodness making a satisfying crunch each time I bit into them. 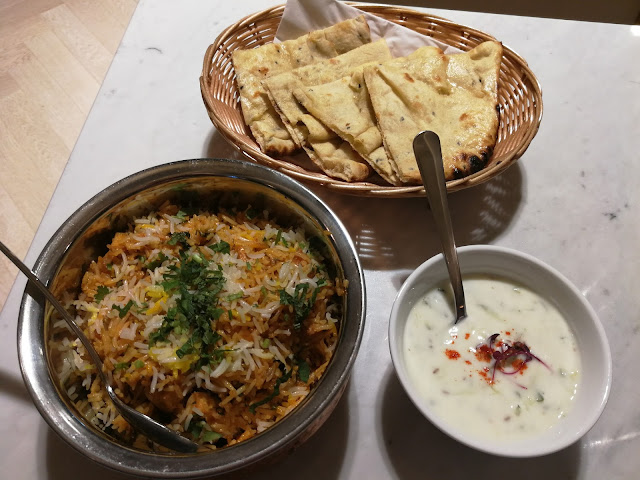 You're spoilt for choice by the menu, which has various vegetable, seafood and poultry dishes on offer. The meals cater for different taste palates, but they are unified by authentic Indian recipes and ingredients.

As such, I had a vegetable biryani with jackfruit rather than the more commercial mixed vegetables it's usually made with. The arcane jackfruit  is a handy source of minerals, such as iron, magnesium, potassium and manganese. It tastes really good with rice; the natural sweetness of it providing a good counterbalance to the other savoury ingredients used in the curry. The vegetables, spicy sauce and herbs also tasted delicious when sandwiched between some cheesy naan bread, which I had (photographed above).

Overall, I would greatly recommend the trip to Masala Dabbas. The chefs at the venue have meticulously prepared mouth-watering dishes which allow the diner a flavour of genuine Indian cooking - and Orpington's culinary scene is all the better for it.

The rest of my restaurant reviews are available here. If you would like me to give coverage to your venue, drop me an email at lemon_and_lime7@hotmail.com.
Posted by Emma at 9/11/2017 02:40:00 pm