Add Brigsby Bear to the list of films I’m going to need to watch purely for BBFC research purposes (like with Fairy Tail: Dragon Cry).

Brigsby Bear is a PG-13 in the States and a 12A in Ireland, yet a 15 in the UK. This in itself is not that bizarre; The Shallows also got those three ratings by the three respective ratings boards.

But it’s the classification reasons that I find bizarre. In their short insight, the BBFC flagged the ‘scene of drug misuses, moderate sex references’.

As with sex, I’ve detected a clear hierarchy of strictness when it comes to drug use at PG-13/12A. In terms of strictness, it goes IFCO > BBFC > MPAA.

The MPAA are the most lax when it comes to drug use, having passed Ray at PG-13, when that got 15 in the UK and Ireland.

David Fincher’s Oscar-winning The Social Network, a PG-13 in the States and a 12A in the UK, got a 15A in Ireland. The Irish flagged ‘the scene of strong drugs misusage’ as the principal reason for its 15A. 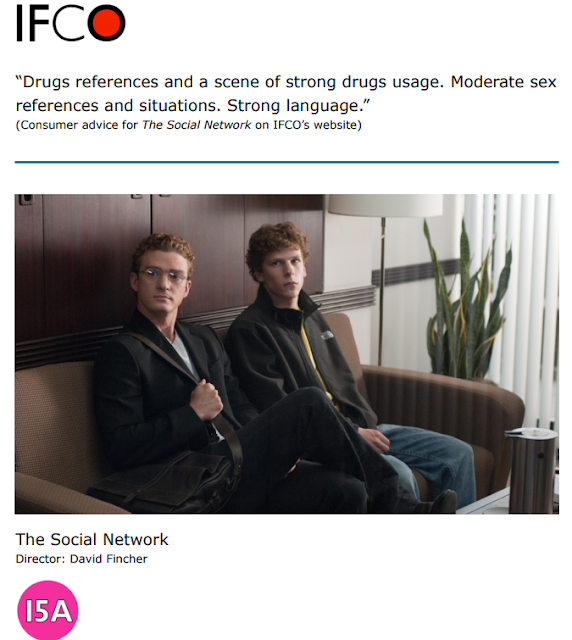 Indeed, many might be surprised that The Social Network only got a 12A in the UK, given the scene in question is a Harvard party, where one girl snorts cocaine off another’s body.


The depiction of drugs use in this scene made cocaine appear glamorous, something the BBFC have historically been stringent against. Methinks if The Social Network hadn’t been a prestige picture with some top-notch performances and featuring some salient life lessons about loyalty, popularity and the unquenchable pursuit of power, they wouldn’t have been quite so flexible, shall we say, in awarding its rating.

Which is why I’m confused by Brigsby Bear. Apparently a teenager takes a pill at a party and passes out as a result, although I will need to watch the film to confirm if this is the case. I find rating something like this, a scene clearly highlighting the negative and risky consequences of drug-taking, a 15 jarring when they awarded The Social Network’s presentation of cocaine as cool, a 12A.

But as I said, I really do think the BBFC tend to make exceptions if the quality of the film is high (and it would have been a shame to deprive 13-14 year olds the right to watch such a good movie, my second favourite of 2010).

The second classification issue is ‘moderate sex references’. The Americans are noticeably more lenient when it comes to sexual dialogue than us and the Irish, which is why the likes of Easy A, Mustang and Dumb and Dumber To were PG-13 in the States and (admittedly tame) 15s over here.

However, when it comes to comparing the IFCO and the BBFC on allowance of sexual references at 12A, we’ve been pretty much identical. In addition to those three films mentioned above, What If… is also a 15/15A by both ratings boards. If I had to name one board as being marginally more strict, I’d wager the IFCO, purely because they rated Irrational Man a 15A for strong sex references, when it only got 12A for moderate sex references here. 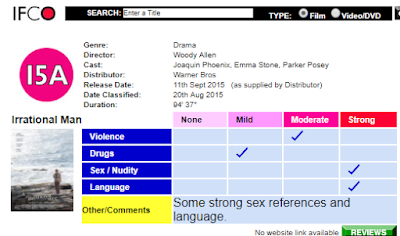 
Long post was long, but basically, I need to see Brigsby Bear to see if it earnt its 15 rating, or if it was an overreaction from the BBFC!

If you're one of the few people who found this post interesting, I examine inconsistencies between the three ratings boards often. Previous post archive.
Posted by Emma at 9/09/2017 01:03:00 pm