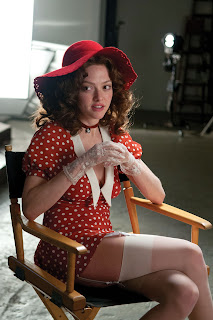 Linda Lovelace, real name Linda Boreman’s beginnings are no different from many an American good-girl-gone-bad. Raised by a Bible-bashing mother (an unrecognisable Sharon Stone, commendably playing against type) and a meek, hardly there father, Linda’s only bouts of having fun are at her local roller-disco with best friend Patsy (the ever-lovely Juno Temple, adding another independent movie to her growing collection). It is there that her shy, wide-eyed charm captures the attention of Chuck Traynor (Peter Sarsgaard).
Traynor is an extremely seedy fella, owning a stripclub where he casually turns a blind eye to his strippers’turning tricks, as well as hitting on Patsy the second Linda’s back is turned. But he can be the most charming man in the world when he wants to be, and that is how he cons Linda into being his betrothed. A few months down the line and Chuck’s various shady dealings land him in serious debt, and it is here that Linda tentatively stars in the movie “Inside Deep Throat”, about a woman who’s clitoris is inside her throat. The first part of the movie makes porn seem like no big deal, almost fun, with its witty sex jokes and repartee among the cast and crew, not to mention the glamour parties with Hugh Hefner. The second part, however, shows us the ugly scenes after the parties, where we discover that Linda was not a so-called empowered woman embracing her sexuality, but rather the victim of her controlling, monstrous husband.


In the end, I was left feeling far too sorry for Linda Lovelace to have any kind of impression of this as a piece of art. Although we as the audience are happy that Linda escaped the chain of violence at the end, as a biopic, it had no message other than “don’t stand for abuse”. Pertinent as that is, I like my biopics to say something more, for example, 2005’s Capote about Breakfast at Tiffany’s writer Truman Capote cannily captured just how much of yourself you have to sacrifice for the sake of your art. Tonally, it was also suspect. Sex jokes in one scene, then brutal depictions of spousal abuse in the other… it didn’t sit with me. So, because of the lack of message, as well as the movie being so completely at void of redemptive characters apart from the lead, and the terrible tonal modulations, I left Lovelace feeling short-changed.

Thanks for that, triffic insight~~~