My planned mission to trial various breakfasts across the capital has taken somewhat of a backburner to work, revising for my MSc, and that annoying thing that is having a social life, but the latter and my mission crossed over nicely when I travelled over to Sutton to see off my friend Rahim, who's leaving to go to the States for Uni today. I've been to a Poppin's before, in Chesham, but I don't remember the breakfast being as good: 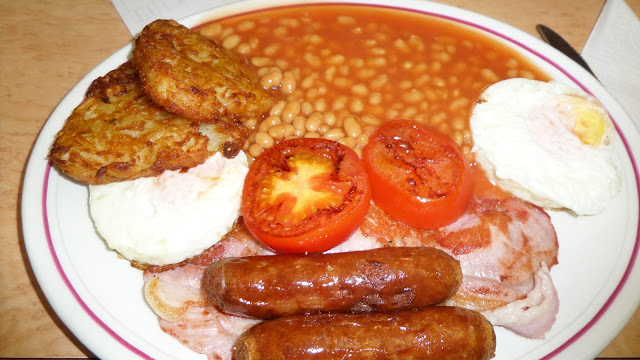 When I uploaded this to Twitter, quite a few commented on:
1) the lack of mushrooms. Not a problem, I don't actually like mushrooms.
2) "anemic looking bacon". That's actually the ridiculous flash on my camera, which I'm still not quite used to. The bacon was fine.
3) too many beans. This is probably the most legitimate point, as I didn't finish all the baked beans, and it adversely affects the presentation of the plate.
The meal was £4.60 (£3.60 for everything minus the hash browns plus an extra quid for the hash browns) and I was completely nourished by it. The meat was cooked healthily and I love the yellow yolk of the eggs. The only downside was perhaps too much baked beans; if they'd given me another egg or slice of bacon instead, that would have been perfect.
Grade: A-
Whilst in Poppin's, I also helped myself to a banana milkshake (KEY), and some pancakes:

The banana milkshake, was, hand-on-heart, one of the best I've ever tasted. "We don't mess about", the waiter said to me, and he was right; the milkshake is pretty much pure ice cream mixed with milk, meaning whilst it probably ain't great for the heart, it was fantastic for the taste buds. The dessert was also wonderful, although a little too creamy at parts.