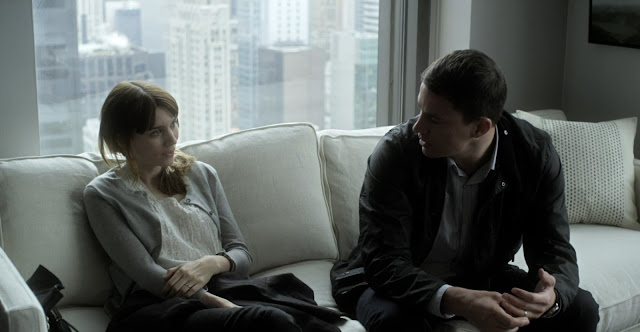 Emily Taylor (Rooney Mara) has been waiting for her husband Martin to be freed from prison for four years (he, played by Channing Tatum, was sent down for insider trading). After the day occurs and he is finally let out, however, she is taken over by spells of depression which culminates in her driving her car into a brick wall. This seeming cry of help is noticed by trendy clinical psychiatrist  Dr. Jonathan Banks (Jude Law). Dr. Banks allows her release from hospital on the proviso that she checks in with him a few times a week.

After trying various standard medications to try and elevate her mood to no avail, he puts her on the newest mood drug, Ablixa, which rejuvenates her, giving her energy, happiness and a sex drive, much to her husband’s delight. However, it comes with the considerable side effect of almost fantastically lucid sleep-walking that culminates in a terrible occurrence that leads to Emily getting jailed and Dr Banks questioning his practices.

Soderbergh talked about Side Effects being his last film. It would be a massive shame for the cinematic world to miss out on his talents, which brought us an eclectic range of pictures from fun ensemble heist movie Ocean’s Eleven, to Channing Tatum as a male stripper in Magic Mike, to inspirational feminist biopic Erin Brockovich, to the engrossing patchwork of drug tales in Traffic, to name but a few.

For all his faltering – I was left wanting by Contagion and Ocean’s Twelve was nothing short of a mess, Soderbergh is a talented, versatile director, and he is at the top of his game in this twisty, convoluted medical thriller. Under pseudonym Peter Andrews, he also takes charge of the film’s cinematography, as well as editing (curiously, under the alias of Mary Ann Bernard); rendering this a proper Soderbergh picture, from top to bottom.

Finally, the film is aided considerably by Scott Z. Burns’ cerebral script, which captures the workings of the legal, pharmaceutical and psychological industries, as well as all the flaws of Jude Law’s protagonist.

For his part, Jude Law puts in one of his finer performances. His last collaboration with Soderbergh in Contagion – another medical drama – featured him sporting a bizarre Aussie accent and completely failing to impress, or convince. Here, he lays true to his roots in playing a British psychologist. As his character explains, he came to New York to practice psychology because, if you say you’re going to see a shrink in Britain, people assume you’re sick. If you say you’re seeing a shrink in America, that implies you’re getting better.

His character is driven by lucre at the beginning of the film, and, in a story where one of the character was sent away for letting the investment banking culture go to his head, the perils of greed are starkly highlighted throughout. In that case, it initially becomes hard to warm to Law, with his cushy job, swanky downtown Manhattan flat and his knack of only taking a true concern with Mara’s character when things takes a bitter turn. However, as the film progresses, we do come to empathise and pity him, especially when the rug is pulled from under him and he stands to lose everything he’s worked so hard for.

Rooney Mara is, as ever, perfect. In Side Effects, her character displayed this knack of chewing her lip whenever she wasn’t speaking, which I can’t say I noticed in her previous acting performances. I couldn’t tell if it was an affectation or something the character was supposed to be doing.

When the film finished, thinking about, I realised which one it was, and it renders her performance a very clever one indeed. Her large, glassy blue eyes make for magnetic watching, and although the film is relatively low on “thrills” by Hollywood’s Saw-standards, one scene, in which she looks in the mirror and sees a transfigured  reflection staring back at her, is disturbing despite its simplicity.

Catherine Zeta-Jones and Channing Tatum are sadly, less convincing in their more thinly-sketched roles, although thankfully, it doesn’t detract from the genius of Side Effects, which made for very effective entertainment on a Wednesday night, and a welcome change from the mindless gunk Hollywood is serving up as cinema these days. If this truly is Soderbergh’s last film, then he has well and truly gone out with a bang.

Wow, this paragraph is nice, my younger sister is analyzing such things, therefore I am going to let
know her.

I have just downloaded iStripper, so I can watch the sexiest virtual strippers on my taskbar.