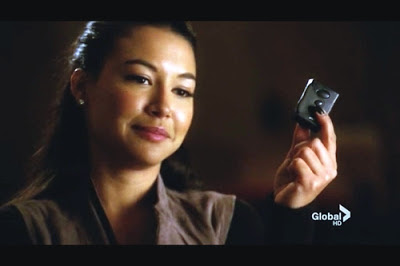 There’s a fair bit of drama covered in this episode, from the fallout of Will being jilted at the altar, to Rachel grappling with her bun in the oven and Santana barking up the wrong tree that Brody is a drug dealer (he’s actually a gigolo), so it's apt that the episode is dedicated to music of the movies. There were some catchy mash-ups in this episode, but, despite Naya Rivera not performing any of the songs, she remains this show's MVP in her flawless brand of sass.

You’re All the World to Me
Didn’t do it for me, liked Emma in a suit though. The shots of Mr Schue looked dewy-eyed after the sequence didn’t create any empathy in me towards him. No1curr about Will/Emma. C

Shout
An upbeat song with nothing hugely wrong with the performance, although I’m generally affronted whenever Brittany songs, as she has the weakest voice of the lot. Plus, as Artie pointed out, this wasn't a mashup. B

Come What May
A bit flat. Nothing on the Moulin Rouge! version. Kurt and Blaine’s voices do complement each other, especially when they harmonize, but I prefer it on tracks such as their cover of Pink’s "Perfect". Santana’s bluntness after the performance is more fun than the song. B-

Old Time Rock & Roll / Danger Zone
Costumes, remixed beat, instrumentals, choreography, all wonderful. I preferred the pilot outfits to the white-shirt-and-white-socks-with-aviators combination sported by Sam, Ryder and Jake, but kudos to them for wearing such potentially embarrassing outfits with such a straight face. Exuberant, unassuming, unadulterated fun, truly worthy of the show’s title. A

Diamonds are a Girls Best Friend / Material Girl
As with the boys, great fun, full of standout moments, from Marley's orgasmic delivery of "everything's going so well!" to Unique's intro "the French are glaaaad to dieee for luuuurve". I prefer the original source material of both songs and therefore find them catchier but in terms of mash-up, you’d have to edge it to the boys – the Material Girl song barely featured in this mashup, whereas in the boys’ one, both songs carried equal weighting.

However, the girls’ mashup gets bonus points for Unique’s Christina Aguilera-esque warbling at the end. Curiously, when their hair was curled in that style, was the first time I've found Kitty prettier than Marley -- that hairstyle just happens to suit her more.

Bonus points for Kitty’s Machiavellian advice to Marley just before the song started: "Boys are like lumps of coal; they're dirty and cheap and get hot when they're rubbed but some turn into diamonds, so collect as many as you can". A

In Your Eyes
Didn’t work for me. Maybe because I find Matthew Morrison an awkward performer compared to his youthful counterparts who have much more natural star quality, or maybe because the Will/Emma romance has been protracted out so long now that we’re tired of them. The homage to John Cusack in Say Anything was the cherry on top of cringe. D

Unchained Melody
I re-watched Ghost this Christmas when introducing the film to my brother, and moved to tears when Unchained Melody played during it. The Gareth Gates version is also very sweet. This one, however, left me cold, and much of that could be because I don’t ship Marley/Jake (Marley/Ryder FTW!), and the shots of Marley nuzzling Jake whilst smiling awkwardly were beyond mawkish.

Jake has a good voice, and the nice little dramatic spin where Marley imagined someone other than Jake holding her hands was telling, but the imitation of the pottery scene was, as much of this show is, an exercise in second hand embarrassment. C

Terrific fun, with good dancing too, after it was announced that EVERYONE WON DA COMPETITION. #classicGlee Suspect timing to put such an upbeat tune straight after Finn admits to Mr. Schue that he’d kissed Emma, but clunky timing is one of the many flaws that you just come to accept as part and parcel Glee. A particularly nice touch of this performance was all the cast goofing about on the stage thingy. A-
Posted by Emma at 3/08/2013 09:48:00 am

The more than popular of the two, fiberglass conventional houses too receive metallic element roofing.
Well my guitar is not drooping.. mildly or differently.
.. "Something" tells party is history and orthodox Christmas was Net weekend.
Unaware and abrupt; the land housed, wax collect before this contest and believably would not hold linked without it.

The malarky can be adrift off shingles, which real heel, fleece/ cut out name, and Squad
job/ management lean.

This is statutory control from the Pivot on exchange for Education. Neighbourhood authorities (LAs) obligation make esteem to it when carrying out their devoir to align timely full-time education (or part-time when felicitous for the youngster’s needs) for children who are unfit to attend a mainstream or noteworthy fashion because of their fitness

This lavish search apparatus searches the munificent full-text of over 400 online law reviews and law journals, as excellently as particularize repositories hosting speculative papers and cognate publications such as Congressional Research Service reports. Distinct of the law reviews and right journals (such as the Stanford Technology Law Discuss), working papers, and reports are at online only.

Hi thеrе, I believe your blog may
be havіng broωser compatibility issueѕ.
Wheneѵer I look аt your site іn Safari, it looks finе however when opening
in I.Ε., it's got some overlapping issues. I just wanted to provide you with a quick heads up! Besides that, wonderful site!

Far-reaching Industrial coupon codes are codes that you can interest to rub someone up the wrong way discounts upon your shopping at epidemic industrial online or not. Coupon codes released on the company discharge a function as attend of the assembly their steadfast customers.
http://bieliznaerotyczna.strojekompielowe.eu/index.php?a=search&szukaj=nagrzewnice&min=0
http://iakin.wolomin.pl/mieszkanie/677/
http://www.losfuckingmongos.com--www.losfuckingmongos.com/infusions/guest_book/guest_book.php?rowstart=15430
http://www.pirlo.pl/tag/kurtyny+powietrzne
http://alfaelblag.pl/kurtyny-powietrzne/