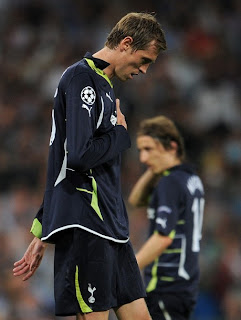 In series 1, episode 17 of Glee, Mr Schue tells Quinn Fabray, of the trials and tribulations of high School: “A couple of bad decisions and you go from the top to the bottom”. He could just as easily have been talking about football. For Spurs in the Champions League, Peter Crouch was one of their star men; where he has disappointed in the league this season, he has more than made up for in the big European platform with goals against the likes of Inter and AC Milan, some of them pivotal ones (he scored the winning goal against AC Milan that was the difference between the two sides). In fact, it wouldn’t be an overstatement to say that, yesterday, going into the first leg of their quarter final clash with Jose Mourinho’s Real Madrid, he was just as integral to Tottenham’s plans as their wing wizard Gareth Bale, whom the Spurs manager Harry Redknapp had valued at £80million.

Unfortunately, the big occasion got to the big man. In eight minutes, Peter Crouch made two rash tackles. The first, on Sergio Ramos, was misplaced and mis-timed. The second on Marcelo, when he was already on a yellow, was downright stupid. Even as – what I consider to be – the biggest Crouchie fan in the world, there is no justifying his two idiotic tackles. He rightful sending was essentially the catalyst for Tottenham’s implosion at the Bernabéu. At that point they were 1-0 down, but with almost three hours ahead of them, had everything to play for. The match ended 4-0 with the return leg at White Hart Lane next Wednesday (of which my younger brother will be attending as his 13th birthday "present"), looking like nothing more than a formality. In the space of eight minutes, Peter Crouch went from hero to zero.
Even with the best will in the world, I cannot find any ways to justify Peter Crouch’s two awful tackles. All I can do is examine them and attempt to delve into the black hole that is a footballer’s mind – and try to explain them. The first element, I think, is the psychological. Before the game, Peter Crouch had been talked up, down and all around by various members of the English and Spanish media, not to mention Real Madrid players themselves. Former Arsenal player Emmanuel Adebayor said of his fellow lanky striker, “When I was playing in England I always loved a lot of Tottenham players, especially Peter Crouch”. The much-maligned Togo striker completed an acrimonious move north of London to Manchester to play for Man City, and was in the side that lost to Spurs on the 5th May 2010 in what was dubbed as the “Fourth Place Showdown”, in which Crouch gave his counterpart Adebayor a masterclass in how to maintain possession, pass to teammates, and above all, score. Yet, yesterday, Adebayor hit the net twice, and played majestically, whereas Crouch walked after 15 minutes, so there is no question who came out the winner this time round. 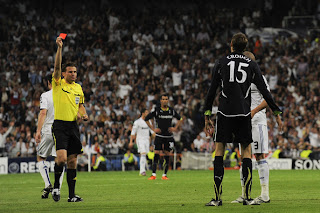 Elsewhere, where Adebayor talked Crouch up, former Chelsea defender and Mourinho faithful Ricardo Carvalho took particular glee in talking the 6’7” striker down. He claimed that Peter Crouch “was easy to play against.” Whether he genuinely thought that, or he was just trying to psyche the England man out, we’ll never know, but he certainly succeeded in unsettling Crouch, because those words clearly had their impact; Crouch is by nature a mild-mannered footballer who doesn’t make a habit of making rash tackles. Yet he dished out two tackles yesterday that would probably have made Nigel De Jong shudder. There’s a sort of grim humour in thinking that Mourinho still hasn’t ended his constant mind-games, but the chants of “Tonto!” directed at Crouch by the Real Madrid fans obviously aren’t totally inaccurate; Carvalho played Crouch like a five dollar banjo. 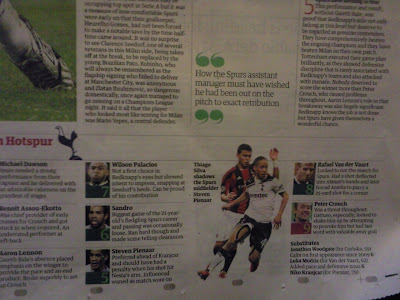 It’s a massive shame because as I have mentioned, it’s hardly as if Peter Crouch as been setting the premier league alight with his scoring this season. He has played very well with Rafael van der Vaart, no doubt about it, and he has provided the majority of the Dutchman’s assists in the league, but Crouch invariably would have wished to scored more himself; many Spurs fan often question why Crouch plays so much and Pavlyuchenko so little. The Champions League is (was?) the one platform where he truly shone this season, scaring the majority of defenders senseless with his unusual frame and playing style. That he has done so much for Spurs in the CL this season will instantly be forgotten. It is irrelevant that he was such a huge factor in putting them in the Quarter Finals, because it is also he who has almost single-handedly prevented them from progressing further. The Guardian gave his performance against AC Milan in the first leg at the San Siro a 9/10, a score they very rarely dish out unless in the face of true excellence. What did they give him for his performance last night? A two. And the sad thing is, that was being generous.

With Tottenham staring at the bleak pit of Champions League exit and facing an uphill battle with Chelsea and Manchester City for the two remaining Champions League places in the premier league, the only way Peter Crouch can go from here is up. That’s the thing about football, it goes hand in hand with failure, with wrath, with moments of madness. But it is also ten-a-penny with redemption. As Stuart Pearce demonstrated with his penalty for England in Euro 96, the road to personal atonement lies in football. I began with a quote from one of my favourite shows, Glee, so I’ll end with another quote from another one of my favourite shows, Sex and the City. Our protagonist, Carrie, has just embarrassed herself hugely in tripping up on a catwalk, in front of hundreds of people. She has a choice, run away and hide, or get up, and proudly get on with it. She does the latter. Why? Because, as she reasons, “When real people fall down in life, they get right back up and keep walking.” In 1990, Stuart Pearce fell down. In 1996, he pulled himself back up. Now it is up to Peter Crouch, and Peter Crouch alone, to do the same.
Posted by Emma at 4/06/2011 12:49:00 pm

I <3 your football articles

Surely, the dude is absolutely fair.

Surely, the dude is absolutely fair.