The Girl Who Played with Fire (Daniel Alfredson, 2009) 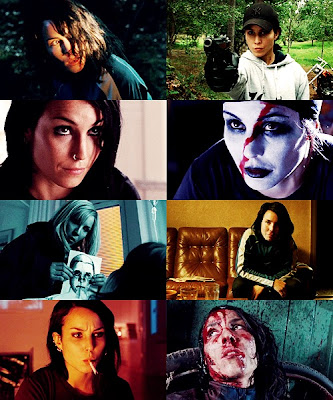 A year on Lisbeth Salander’s minor victory from the end of The Girl with the Dragon Tattoo, the eponymous character back in Stockholm. Mikael Blomkvist, who’s magazine Millenium, she had helped gain back a legitimacy in the first film, is now investigating sex trafficking. At the same time, a bunch of murders (including that o the lawyer who raped Salander in the first film) occur, framing Salander for the murders. Lisbeth Salander knows it’s time to go on the run. She also knows that someone is after her. 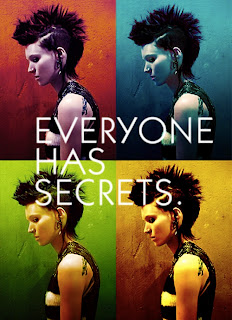 As with the first film, what makes The Girl Who Played with Fire is Noomi Rapace in the lead role. With her short spikey blame hair, multiple facial piercings and tattoos and skinny frame, she is the physical embodiment of Lisbeth Salander, but her performance is just as noticeable, if not more so, than her physical attributes. In one scene, where she has a man tied up by the neck and is trying to extract the truth from him, face painted white (for some reason), Rapace’s reactions to learning each new fact totally mirror our own. It will be interesting to see how Rooney Mara, who turned heads as Jesse Eisenberg’s love interest in The Social Network, will fill her shoes in David Fincher’s big-budget Hollywood adaptation of the series. From the photos, she looks every bit the part, but Mara has her work cut out filling Rapace’s shoes.

What distinguishes this instalment of the film from the first is that here, we delve deeper into Lisbeth’s murky past, with the reasoning behind her cold exterior illustrated somewhat, especially when we find out why she was labelled “incompetent” in the first place, and what she did to get herself thrown into scare. At the same time, as events become progressively more sinister, Lisbeth comes to accept that sometimes, she can’t handle the world entirely by herself, and becomes more receptive to the held from her friends. At the top of these people is Mikael Blomkvist, who’s belief in Lisbeth’s innocence never falters for a second. As anyone who has read the books will know, the Mikael/Lisbeth will they/won’t they romantic subplot is ongoing throughout the trilogy, and the natural chemistry between the two actors is likeable and believable. Unfortunately they spend much of this film apart, but even so, the way they communicate via short, staccato messages through computers (which Lisbeth hacks expertly) all builds to what I feel is one of the on-screen duos of the 2000s. 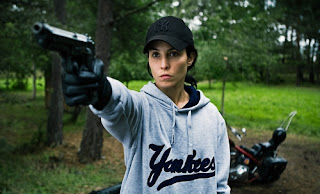 That the film is not quite as thrilling as the first is more down to two things. Firstly, the whole “missing person” plotline of the first was a little more interesting. Secondly, it is due to the very high precedent set by the first film. From some scenes, it is easy to see how these two films, and the finale, were adapted into a six-part TV mini-series in its homeland Sweden, as production value is generally not the highest. But, nonetheless, The Girl Who Played With Fire is an intense, well-sculpted bit of filmmaking, worth watching, and one that doesn’t shy away from the dark underbelly of the Swedish underworld. I eagerly await seeing the third.
Posted by Emma at 4/03/2011 04:14:00 pm

It is worth watching movie on big screen. But I think you must read the book before going through whole this movie..Quite interesting one...Loving it..

I have just last week watched the first movie and was entertained! Wish I didn't now know this is not as good - often the case though, thanks for sharing.

I just got out of bed and I am already reading your articles. This means something! Really useful information. Thanks!

I must explain, your publish will go to the nerve of the subject. Your pellucidity leaves me seeking to know much more. Just so you already, i will instantly seize your feed to keep up thus along with your web website. Sounding Out thank you is just my little way declaring bravo for a good resource. Take on my sweetest wishes for your next publication.

I can see that you are spending a lot of effort into your website!I am deeply in love with every single piece of information you post here (there are not many quality blogs left.By the way if you are looking for link exchange with quality Estate Agents Directory,please drop an email-I will be glad to add your link.

This is what I have been looking in numerous internet sites as well as We last of all found this these. Incredible piece of writing. I'm sure which means floored. Can certainly not imagine this kind of matter may be possible by it... I think there is a fantastic know-how in particular even though deals having these kinds of themes.

Precisely what I have been checking in several web sites and even My spouse and i lastly discovered it in this case. Incredible content. I am therefore floored. Could possibly never think of this sort of matter can be performed with it... There's no doubt that you will have a fantastic expertise specifically although negotiations with such content.

Your blog article is very interesting and fanatic, at the same time the blog theme is unique and perfect, great job. To your success, one of the more impressive blogs I've seen. Thanks so much for keeping the internet classy for a change.

Functioning at your house which has a pleasant treadmill is usually a smart way to eliminate body weight and obtain in
condition without having going to the gym.

There are lots of strategies to improve the entertainment benefit and deliver up your dedication aspect
to exercising.

Once you are getting dumbbells on your gym it's essential to make sure you contain the suitable sorts to fit all ages and fitness degrees.