Nick Carraway (Tobey Maguire), a recent Yale graduate, moves into a small cottage on the west Egg of Long Island, next to the luxurious mansion of the enigmatic Jay Gatsby (Leonardo DiCaprio), a man whom everyone seems to be talking about. He visits his cousin, Daisy Buchanan (Carey Mulligan), and her husband Tom (Joel Edgerton), wherein he discovers that Tom is having an affair.

Soon, he is acting as go-between for Daisy to have an affair as well when he sets up a re-acquaintance between Daisy and Gatsby, who, it turns out, were lost loves, a lost love that Gatsby will do anything to reclaim.

Based on F. Scott Fitzgerald’s classic novel, Luhrmann plays true to the story, but adds many of his signature flourishes. The parties Gatsby throws are more vivid and opulent than anything the book rendered, and the Jay-Z produced soundtrack contributes to the bombastic vibe of the film. Music features prominently in painting the tone of the film, and there are some inspired touches – Lana del Rey’s melancholy elegy “Will you still love me” captures the essence of Fitzgerald’s book, and I particularly liked the way the tune was played throughout at the key dramatic moments. “100$ bills”, a song by Jay-Z himself, is another good one, which features when Gatsby and Nick visit a clandestine club hidden behind a barbers, and it definitely adds to the MTV-style cool that Luhrmann does so well.

Luhrmann has commandeered some movies with sensational soundtracks – Romeo + Juliet and Moulin Rouge! come to mind, but featuring beautiful songs from Florence and the Machine, Beyonce (who collaborates with Andre 3000 on a chilling cover of Amy Winehouse's Back to Black), and The White Stripes, The Great Gatsby could just be his magnum opus in the aural stakes.
When F. Scott Fitzgerald wrote The Great Gatsby in 1925, it was his personal indictment of the American dream and the corruption and hedonism it evoked. Much of this is epitomised in the lead female, Daisy Buchanan, who stays with her rich husband despite him having multiple “sprees” which she knows about, having an affair of her own, and forgoing the love of her life when he was penniless.

Carey Mulligan isn’t an actress I’m particularly fond of, but she does a solid job in one of the most thankless of female roles, albeit injecting Daisy with more depth than she perhaps merits. Apparently, Daisy Buchanan was partially modelled on Fitzgerald’s own wife, Zelda, so I think the idea is that for all her many flaws, we’re not supposed to see Daisy as the complete goldigger that she is. It is thanks to the gravitas of Mulligan’s performance that she halfway manages to convey that, albeit being a tad too serene.
As Nick, Tobey Maguire is the embodiment of an active narrator. In the novel, more actually happens to him; he dates Jordan Baker, the attractive celebrity golfer and Daisy’s confidante, but such is the time constriction of the film that that is more of a plot device than an actual plot development here. Maguire is admirable, and features some of that amicable goofy smile that he sported in his early stages of Peter Parker when he was learning the ropes as Spiderman. But the MVP of the performers in the film is, as with Django Unchained, Inception and various other films which I was disappointed with overall, Leonardo DiCaprio.
Robert Redford also tackled the famous Jay Gatsby role, but he seemed too mature for the role, and lacked one crucial element, optimism, in his performance. DiCaprio has that in spades, to the point where it exasperates the audience, and paints his character as a deluded sap, who would do anything for his lost love, even when she doesn’t deserve him.

We, as the audience, share Nick’s frustration when, late on in the film, Gatsby accepts the blame for a pretty big error committed by Daisy, just because he doesn’t want her to get into trouble. It seemed pretty inconceivable when I read it in the book, but somehow, DiCaprio manages to make his hapless hopefulness seem believable. 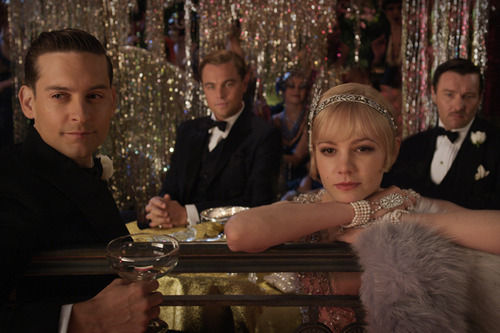 The supporting cast are also good, with particular commendations having to go to Jason Clarke, who plays the perennial deadbeat, George Wilson with so much conviction that you really do feel for the fella. I also liked stage actress Elizabeth Debicki as Jordan, who featured the kind of languid poise that I pictured from her when reading the book. I was very surprised to discover after watching the film that Debicki was only 22 years old, as in the film she more than holds her own against the more seasoned auteurs.
I feel that the screenplay, whilst delivering pretty much all the action the novel had, scrimps on the message Fitzgerald was trying to convey. He meant it as a damning condemnation of the roaring 20s and particularly the “carelessness” that Tom and Daisy exhibit. Whilst this is still present in parts of Maguire’s voice-over, I feel that Luhrmann forgoes the deepness for storytelling. Which I can’t altogether fault him for, as storytelling is definitely his forte, but I just feel that perhaps there was so much style in The Great Gatsby that he forgot about the substance of his source material altogether.

For all the luscious cinematography, inspired costume design (loved the flapper dresses) and fantastic soundtrack, there was something lacking about Baz Luhrmann’s colouring of Fitzgerald’s novel. Despite the actors’ best efforts, the central romance simply wasn’t convincing enough for us to believe in it, meaning that, whilst The Great Gatsby was a wonderful cinematic experience, emotionally, it left me feeling as empty as one of Jay Gatsby’s parties.
5/10
Posted by Emma at 5/30/2013 03:19:00 pm