The perfume samples deal on the FeelUnique website that I've gotten a bit used to for the past few months is currently on hold. For the uninitiated, that's 5 samples for just £3.95, making it a very cost-efficient way of exploring whether a perfume is for you in this new world order, where department stores no longer put on testers.
These FeelUnique samplers had been a marvel for me, and four batches of five samples each, meant they'd kept me busy for the last four months. 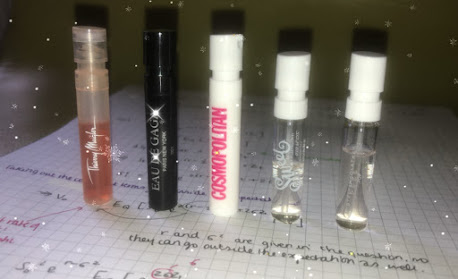 Feeling I needed my kick of a few new fragrances to test out and review, I looked elsewhere. On eBay, quite a few sellers offer bundle deals, where you get a range of perfume samples. The price per sample works out to be cheaper than if you'd ordered them on FeelUnique, which is only fair as in these cases, you can't pick and choose which brands you get; you get what you're given (and the samples available on FeelUnique are more up-to-date and thus for perfumes that currently retail at higher price points).
Thus, whilst I wait for FeelUnique to re-instate their sampler deal that I'm a tad hooked on, I'll count down the time by reviewing the various perfumes that came in my eBay order! I got enough different samples (there were a fair few dupes as well) in the batch to fill out four blog posts, I should think. So this is part I of the eBay pot luck!
Thierry Mugler Miroir des Majestes Eau de Parfum
This is a white floral perfume that aims for an oriental musk. While I like some floral perfumes, with Lancôme's gorgeous La Vie Est Belle being my most-worn perfume back when I was in the office, white flowers are a slightly different flavour from what I prefer.
The components of the perfume are cardamom, coriander, jasmine, suede, orange blossom, amber and agarwood. I personally don't feel that some of those elements go so well. As shown in the photo above, the liquid is a pink/peachish colour which stains the skin when you first apply it. This is largely down to the spices in the perfume. I thought the plethora of spice and herb smells used in the construction of it also gave the perfume a somewhat unisex smell, and we all know how I feel about unisex fragrances.
The linger does improve, as the spicy notes which my nose took the most umbrage with thankfully evaporate, so the worst impression of it is at the start. But this wasn't to my taste overall. In fact, the most positive thing I can say about Miroir des Majestes is that at least it smells better than the toilet cleaner Moschino scent. And for these prices, we need to be setting our standards a bit higher than that!
3/10
Eau de Gaga from Lady Gaga
I enjoyed her acting in and great song-writing in A Star is Born, one of my favourite films of 2018. And I have lots of all-round appreciation for Lady Gaga as a performer. But this fragrance wasn't for me.
Although it's marketed as a unisex scent, Eau de Gaga smelt very masculine to me. This perception isn't helped by the appearance of the bottle: 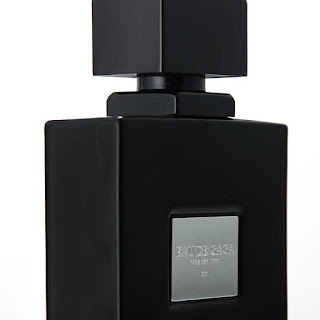 The bottle, whose shape and colour certainly doesn't give anything away, was clearly designed to be in line with the ethos of the perfume, which is 'an enigmatic scent, fusing daringly diverse elements to create a beguiling allure'.
Having smelt it, my thoughts are that the only enigma is who would buy this? Comprising of just lime, white violet, leather and woody notes, the fusion of these ingredients renders Eau de Gaga unpleasantly soap-like. The initial burst of lime is far too strong when it hits the skin the smell didn't improve on impact, as the concoction made me nauseous.
Lady Gaga shouldn’t quit the day job!
3/10
Cosmopolitan Eau de Parfum
I'm always a bit wary of perfumes that have been launched from magazines, as one is all too aware that producing fragrances isn't the main project of the creator, and thus expects their side hustle to be somewhat haphazard.
The fact that the perfume lists so many ingredients: nectarine, pineapple, pink pepper, bergamot, mandarin orange, saffron, pimento, heliotrope, jasmine and carrot seeds to name just some of the ingredients, attests to my theory that the formula for this probably needs refining. I suspect the makers of the Cosmopolitan scent have gone for a quantity, not quality, approach.
However, compared to the Thierry Mugler and Lady Gaga fragrances, there was something enjoyable about the almost child-like 'throw loads of elements into the mixing tray and hope it works' approach to Cosmopolitan's scent. The end product is a nice perfume for the summer: sweet, with hints of spice and having an aura of being for younger women.
The longevity on the product isn't up to much, but I wouldn't expect it to be, coming from a magazine. A sophomoric effort, but still nicer on the nosebuds than many pretentious scents from Cosmopolitan's more experienced counterparts.
6/10 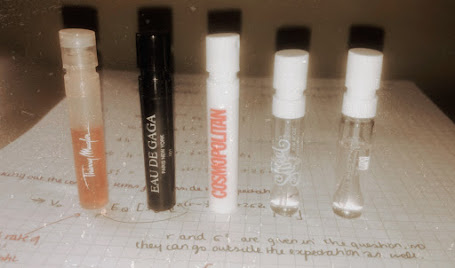 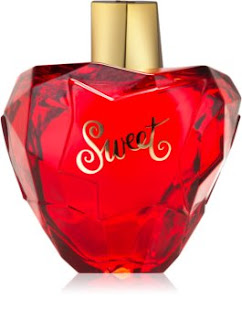 Sweet definitely doesn't mis-market itself in the aroma stakes. It smells just that, evoking memories of cherry Coke. It comes in an enjoyably kitchsy bottle, perhaps a knowing hat-tip to the over-the-top Lolita aesthetic it's aiming for. It does so well to evoke the Nabokov creation, in fact, that I can picture Lolita Haze herself spraying herself with this perfume, whilst wearing heart-shaped sunglasses and savouring a lollipop.
With top notes of sour cherry and sugar, middle notes of cacao, iris and angelica and base notes of musk and cashmere wood, it's undeniably feminine. More specifically, due to the cherry smell being the strongest element in the formula, I would say the fragrance was girly. Perhaps a bit too flirty for me to wear in the office (Sweet's linger has a whiff of lipstick about it!), but a good smell to pair with a pink outfit on a cheery summer's day.
7.5/10
Pop by Stella McCartney
Pop is a floral perfume with notes of woodiness and musk. With top notes of tomato leaf and green mandarin, you pick up a subtle whiff of a garden from the fragrance, but its strongest scents are its floral middle notes and the base notes of sandalwood and cedar. Feminine, flirty and playful, this is a scent I'd wear when out with friends, rather than to work.
Cheap and cheerful (you can get a 50ml bottle of this perfume online for c. £20), Pop is a fragrance that doesn't take itself too seriously. It's what the song 'Girls Just Want to Have Fun' would be if it were a scent. For that price, one wouldn't have any qualms re-spraying Pop, which you will need to as its longevity is quite weak.
Whilst I like the smell of Pop on initial impact with the skin, its drydown was a bit less palatable. As the floral and woody components of the perfume interacted with the skin over time, the smell was somewhat synthetic.
6.5/10
--
If you have any fashion or beauty products you would like me to review, drop me an email at lemon_and_lime7@hotmail.com.
Posted by Emma at 12/28/2020 03:25:00 pm

The writer is very intelligent and every single word is saying the efforts of the writer. This post is written after a good research on the topic hence, this post is saying a lot about the topic. How can I download and then install Bullguard free antivirus?

If you are looking for the best store that is selling perfumes and different fragrances than you just landed in a right place. ScentGod is the best place to buy women’s perfume at an affordable prices.