My predictions last year were decent, especially in how I anticipated that we'd give Best Film to Roma, a move that was not mirrored by the Academy Awards, who went for Green Book.

Thus, as is a tradition on my blog, I'd try my hand at predicting tonight's British Academy Film Awards! Remember, the below is who I think will win, which very rarely overlaps with who I think actually should win.

Sadly, I think this uninspired Dunkirk rip-off will triumph, even though it's not a patch on Dunkirk, and feels like watching someone play a computer game for 2 hours. I see BAFTA falling for the 'made to look like it was filmed in one shot' gimmick, and even more sadly, the Oscars to do the same next week.

For the four acting categories, I'm predicting Phoenix, Zellweger, Pitt and Dern. The foursome all won at the Golden Globes, Critics Choice and SAG, and as I've long lamented, the BAFTA seem more concerned with imitating the Oscars these days than they do influencing it, so yeah.

Best Supporting Actor: Brad Pitt, Once Upon a Time in Hollywood

Of the four acting categories which are certains to win the Oscar, I think this category is the one where there may be a surprise, and Florence Pugh could upset at BAFTA. This is because she's British, and as BAFTA showed last year, with giving Rachel Weisz the win here, they do sometimes play favourites with their own. However, in that case, the actress who went on to win the Oscar, Regina King, wasn't nominated for a BAFTA, making Weisz's win more straightforward.
So, I think Dern edges it over her Little Women on-screen daughter, but I definitely expect Florence Pugh to be walking up to the podium in the not too distant future!

Best Original Screenplay: Once Upon a Time in Hollywood

Parasite did take Best Original Screenplay at the WGA last night, but OUATIH wasn't nominated as Tarantino isn't a guild member, so I can't get too excited. BAFTA obviously loved OUATIH, as they even nominated Margot Robbie in Best Supporting Actress for it (even tho she barely spoke in the film...), so something tells me they like the creepy misogynistic Bruce Lee-disrespecting film more than they do Parasite.

I optimistically predicted Parasite to prevail in this category in the Golden Globes, and was burnt, when Margot Robbie announced Quentin Tarantino was the winner (ew 💩). So I have learnt my lesson. I shall thus emotionally hedge in my BAFTA predictions, as I often do in fantasy football: predict someone who I don't want to win to win, so that if they do, at least I get the satisfaction of being right. And if they lose (hopefully to Parasite), I can be happy that what I really wanted to happen occurred.

Jojo Rabbit beat Little Women for Adapted Screenplay at the WGA last night, and it could well beat it at the Oscars. But I think, for British sensibilities, we tend to be fonder of literary adaptations than Americans, and Little Women added two monologues, one for Ronan's character, one for Pugh's, which weren't in the original text, which really enhanced the story and fleshed out both their characters.

Outstanding Debut by a British Writer, Director or Producer: For Sama

As uninspired as I am by the Dunkirk rip-off, Roger Deakins did do the cinematography for my favourite film of all-time, The Shawshank Redemption, so I wouldn't begrudge him a win.

Parasite wasn't nominated in this category, The Irishman and Once Upon a Time in Hollywood were about ten hours long, and Jojo Rabbit is a comedy, and comedies don't tend to win for Editing. I'm predicting Ford vs Ferrari for the car-racing scenes, as they gave it to Baby Driver over Dunkirk two years ago (still not over it).

But whoever wins, it doesn't really matter, because they gave this award to Vice last year, showing they don't really know what they're doing.

Production Design: Once Upon a Time in Hollywood

Music: 1917
I'm going with Thomas Newman here because he, like Deakins, worked on my favourite film, The Shawshank Redemption.

I'll give Sam Mendes this: he's good at picking craftsmen to work with!

However, the Joker score could just as easily win here. It won at the Golden Globes.

Dunkirk won this category two years ago, and this film rips off Dunkirk in every way, so.

My personal pick here would be Klaus, which was a beautifully animated and very original Santa Claus origin story. Toy Story 4 had its moments, but I could feel the Pixar cash-grab coils turning as the story went along. And I'm very disturbed that Christina Hendricks' character took Tom Hanks' voice box. That's such a dubious message to be sending to kids. 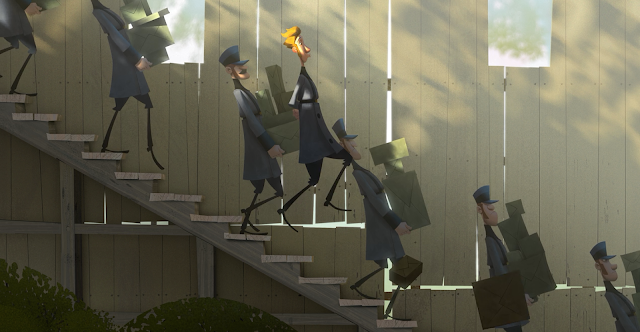 This film never really got any traction in the Oscar race for Best Doc, but I loved it, it's one of my favourite films of 2019. Maradona is such a fascinating character, and the sort of footballer who's life lends perfectly to a documentary.

Sadly, this is the only award I see Parasite winning tonight. 😞 BAFTA only nominated Parasite for four awards, the bare minimum (even the Academy nominated it for six). The fact that Parasite didn't get any acting nominations, yet BAFTA nominated Margot Robbie just for looking pretty in Once Upon a Time in Hollywood, tells me that it only sneaked into the five nominees of Best Film because BAFTA knew they'd look racist if they didn't nominate it.

And here's a news flash: with all twenty acting nominations this year being white actors, they look racist anyway.


... Although graciously, this award is voted by the British public, who aren't as racist as the BAFTA voting body (Rising Star has gone in the past to John Boyega, Daniel Kaluuya and Letitia Wright last year). The winner in this category tends to be the person who was in the most high profile film. Kaitlyn Dever was in Booksmart, but that wasn't quite as popular over here as it should have been. Awkwafina was in 2018's Crazy Rich Asians and Ocean's 8, so people will definitely know who she is.

Her main competition, I reckon, is Jack Lowden, who was in Dunkirk, played Florence Pugh's on-screen brother in Fighting with my Family, and was in Mary Queen of Scots. But given Awkwafina recently won the Golden Globe for Best Actress in a Comedy, I feel her visibility might just edge it.
Posted by Emma at 2/02/2020 03:20:00 pm

the Oscar, Regina King, wasn't nominated for a BAFTA?

And it's easier for many if
Not to be, but to seem!
But a winner, like https://viooz.cloud in the movies, is not a matter for many people.