Renowned sleuth Hercule Poirot finds himself in the first class carriage of the Orient Express, due from Istanbul to London. In torrid and icy weather, the train gets derailed, after which he discovers that Ratchett (Johnny Depp), an indecorous art wheeler dealer who was travelling on the carriage, has been murdered, by 12 stab wounds, spread indiscriminately around the body.

In isolating the suspects to the cohort of first class passengers, he interviews each of them to find out whodunnit. However, each person he speaks to happens to be, rather inconveniently, being imprecise with the truth. 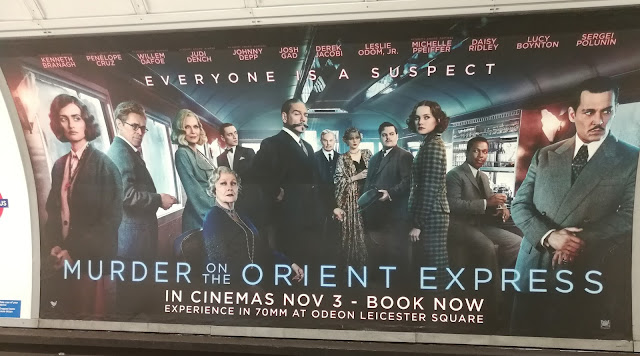 I like how Kenneth Branagh's gone for the pretence of wanting alphabetical billing, yet conveniently abandoned that idea when it comes to Lucy Boynton. I wonder why?


Kenneth Branagh, that blonde, sometime dreamboat who’s good looks led to him being cast as Guildery Lockhart in Harry Potter and the Chamber of Secrets, is somewhat a counter-intuitive choice to play the short and portly Belgian Poirot, but Branagh is the director, so we’ll chalk this unorthodox casting decision down to that same streak of actor/director vanity that plighted Denzel Washington in Fences. To Branagh’s credit, he captures Poirot’s mannerisms and quirks well, and after a while, his physical disparity between the literary character begins to evaporate.

Being such an ensemble piece, Murder on the Orient Express is unable to give any of the murder suspects time to breathe. There’s an eye-watering European cast littered about the film, with some American additions. The character who caught my eye the most was Ratchett’s secretary McQueen, played by Josh Gad (aka Le Fou in Beauty and the Beast). Gad is very good at sporting a chummy veneer, and he layers this effectively in Murder on the Orient Express with an implication of hiding something.

The rest of the cast are mostly underused. Dame Judi Dench plays a Russian princess, and whilst her accent is perfectly serviceable, the brief glimpses of her character’s hauteur in the snooty looks she shoots Poirot were far too short-lived.

Similarly, Penélope Cruz and Michelle Pfeiffer tantalise with fleeting displays of their inimitable talents, but sadly, their characterisations (of a religious zealot and an alluring but somewhat fraught husband-seeker, respectively) are lost in the melange of players. Daisy Ridley, whilst very pretty and always having a nice screen presence, sadly fluffs some of her line-readings. The ‘I like rose’ line required far more gravitas. But, this is more the fault of the dense nature of the film and its many suspects, than the actress herself. 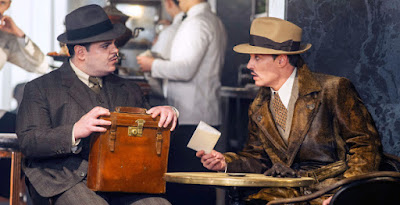 The worst performer in the ensemble, however, has to go to Johnny Depp. The character of Ratchett needed some sketchiness, which we all know he’s capable of delivering. It would be any actor’s dream, to portray a dislikeable felon, and make such an impact before his murder, that his presence is missed for the rest of the movie. Sadly, Depp passes up this golden opportunity, instead reciting his lines with such apathy, you’d think the only reason he wandered onto set was to pick up his paycheque.

Despite the mixed bag of the cast, such is the excellence of the venerable Agatha Christie book from which it is based, that Murder on the Orient Express plays well. There are some tart one-liners sprinkled in the film, which provide some much-needed levity from the mystery. The poignant moments certainly pack an emotional punch (Patrick Doyle’s intelligent but unashamedly heart-pulling score helps), and there’s an element of insincerity to what every character says to Poirot, that we are totally willing him to solve the mystery.

Not groundbreaking cinema, then, and nor is it the best big-screen adaptation of an Agatha Christie novel, but in terms of sheer entertainment, you could do worse (you'll have to get over the rather brazen product placement from Godiva chocolates, mind). Especially if you don’t know how it will go – the twist will dazzle you.

Stop trying to cheat the IMDB external reviews page. You are being watched.

Your site is "zummer.blogspot.co.uk". That begins with a Z

You've named it on IMDB as "Anna, Look!", which begins with an A.

A comes much higher than Z.

You are being watched.

My blog IS called Anna, Look! has been since like 2010? Which was long before I was adding my reviews to IMDb.
Also, you do realise someone's URL can be completely disparate from their blog title,right?

But thanks for watching me. At least someone's reading the blog that way :)

There's a chance you are eligible to receive a $350 Ikea Gift Card.