A month shy of turning 28, Taylor Swift has been around the block and suffered a few knocks to her standing (not to mention her heart) for her troubles. Her sixth album comes at some time when some self-reflection is much-needed. 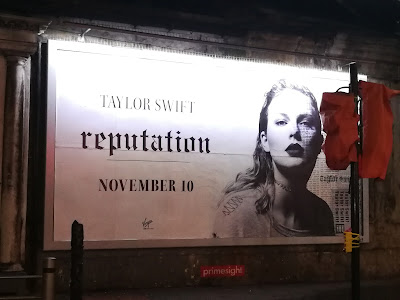 With a title like ‘Reputation’, she’s certainly cognisant of that artefact. It would be trite to dub her 15-track album as a ‘confessional’, as she’s always been very forthcoming about wearing her heart on her sleeve, and channelling her painful life experiences into song-writing inspiration, but there's a salient self-awareness in this album that was perhaps lacking in her previous work.

In ‘End Game’, her only collaboration of the album (with Future and Ed Sheeran), Taylor Swift shows her emotion, intimating that she wants to be her current chap (British actor Joe Alwyn)’s end game. The intro is her naked voice saying as much, before the chant, ‘Big reputation, big reputation, ooh, you and me, we got big reputations’, showing Swift has no illusions about what others are saying about her.

There’s genuine pathos when Swift admits, ‘I don’t wanna hurt you, I just wanna be’, and Ed Sheeran’s intelligent line, ‘I got issues and chips on both of my shoulders’, is honest self-reflection mixed with dextrous wordplay.

Unsurprisingly, given the name of the album, ‘End Game’ isn’t the only track in which Taylor Swift alludes to her reputation. There’s vulnerability in the introduction to ‘Delicate’, when she professes, ‘My reputation’s never been worse, so he must really like me for me’.

In ‘Blank Space’ from her last album, she sang, ‘It’s gonna last forever, or it’s gonna go down in flames’, whereas in 'Delicate', the same sense of trepidation towards a new relationship is given a much more temperate song-writing treatment, ‘We can’t make promises now can we dear? But you can fix me a drink’.

There’s definitely a sense that all the drama and shitshows have forced Swift to grow up a little.

In the music video to ‘Look WhatYou Made Me Do’, the first single released from this album, Taylor Swift riffed on the public’s perception of her, and her penchant for playing the victim. Almost as a retaliation to her haters, this album is lower on the self-pity front, instead taking a more combative tone. ‘Look What You Made Me Do’, ‘This is Why We Can’t Have Nice Things’ and ‘I Did Something Bad’ positively bask in her Amy Dunne-esque streak, and it’s no coincidence that they are my three favourite songs from the album.

The musicality in those three songs are absolutely on point. All three are written in minor keys, and the cadences in them, so pleasing. The bass drop and dubstep beat in ‘I Did Something Bad’ recalls ‘I Knew You Were Trouble’ (only the trouble in question this time is Taytay herself) and the RnB flow effectively contribute to a delicious femme fatale vibe. ‘This is Why We Can’t Have Nice Things’ starts modestly, but announces the full force of its intentions with the refrain, which is ridiculously catchy.

And that spoken line from LWYMMD, ‘I’m sorry the old Taylor can't come to the phone right now. Why? Oh, cos she’s dead’,  has already become immortalised in memes.

Taylor Swift has always been a dab hand at song-writing, and this album boasts some impressive lines of poetry, the most poignant ones where she addresses the pain and betrayal she felt, ‘I bought a knife to a gunfight’ was a stunning metaphor, I felt.

As someone who’s encountered (far more than) my share of Ben Affleck in Gone Girl-type snakes, these are lines which resonated deeply with me.

So who can blame Taylor, then, for becoming flintier as a result of these bruising experiences? As she says herself, ‘I grew smarter, I grew harder in the nick of time’. When she announces, ‘I bury my hatchets, but I keep maps of where I put ‘em’, it recalls Kendrick Lamar’s line in 'Bad Blood' (‘You forgive, you forget, but you never let it go’).

Indeed, some of the lyrics in Reputation reach levels of petty that Miles Teller achieved when sent that gloating tweet, ‘Congratulations, Moonlight!’ (Teller was rumoured to be pencilled in to play Sebastian in Blah Blah Bland, before Chazelle gave the role to Ryan Gosling).

Taylor Swift is best when she’s owning that she’s a petty little so-and-so; I lived for her cackle during ‘And here’s to you, because forgiveness is a nice thing to d- Nah, I can’t even say it with a straight face’.

Kanye West, Kim Kardashian, and ex-boyfriends Calvin Harris and Tom Hiddleston (he deserves it anyway for being in that High-Rise bollocks) are the most prolific targets of her vitriol.

Essentially, Taylor Swift has ended the era of the good passive girl who repeatedly had bad stuff done to her, that was the prevalent motif of her earlier work. In Reputation, she’s not shying from her mistakes, revelling in how she leads vain men on and drops them the second a new project comes along. Imperfect, but much more honest and three dimensional.

‘Getaway Car’, ‘I Did Something Bad’ and ‘So It Goes’ all offer a window into her brand of fragrant yet calculated evil, but, as she argues, ‘don’t pretend it’s such a mystery, think about the place where you first met me’, which to me, evoked memories of Gone Girl, The Wolf of Wall Street and Carol, respectively, when Pike, Robbie and Blanchett’s characters, respectively, tell their husbands that they have no reason to bellyache, as they knew exactly what they were letting themselves in for when they married them.

Ironically, it also made me think of the lyric in Kanye West’s ‘Stronger’, ‘don’t act like I never told ya’.

Reputation marks a new chapter of Taylor Swift’s life. The country guitar roots that established her are completely elided from this album.

Instead, we get allusions to F. Scott Fitzgerald and Charles Dickens novels, beats that are simultaneously contemporary and timeless, poignant observations on the redemptive power of love, and a whole mountain of shade.

And I am so here for all of it.