I love singing. Whether it be Disney songs, RnB, Broadway showtunes, power ballads, I’m happiest when I’m warbling along to music (and often getting the lyrics wrong in the process). Piano Works allows you to do this to live piano music, along with a percussive and jazz band, and a lead singer, whilst dancing in a night-club-style venue. That was my Friday night sorted, then. 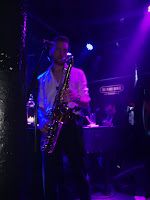 The band played their instruments really well, with flamboyance from the electric guitars when the occasion called for it, and more nuanced accompanying for other songs. The band shrewdly rotated singers depending on the flavour of the song. Sometimes, as was the case with Kanye West’s Goldigger, more than one person sang at a time. They had a fantastic female singer who belted out How Far I’ll Go from Moana. Given I have recently just watched Moana and the song is fresh in my mind, that in itself made that Friday one of the best nights out I’ve had in a long time.

The song choices at Piano Works were on point. They played Uptown Funk, Piano Man, American Boy, Grace Kelly… basically, crowd pleasers. And the crowd was very pleased. Here’s a clip of their performance of What Makes You Beautiful. The One Direction song is only my fourth favourite of all-time, so I had a whale of a time dancing to it!

I think my favourite moment was when they played that karaoke classic Let It Go from Frozen; all the girls unanimously channelled their inner Elsa and crooned with abandon when it was performed!

You can also make song requests on the bespoke napkins. My suggestion of Iggy Azalea’s Fancy sadly wasn’t played, so be wary that there are lots of other people asking for their favourites to be played (and probably tipping quite handsomely). 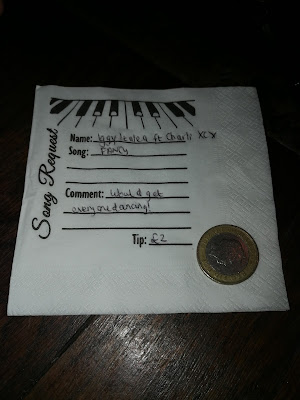 As for my impressions of the place, isolated from the music: the alcohol was very expensive. A G&T cost me about £12, which genuinely made my eyes water (and it wasn’t due to the deliciousness of the drink). Piano Works operate on a very crafty business model: free entry to listen to the fabulous music before 11pm, but in order to fully enjoy the music, ideally you’d have to have a few drinks inside you, which is where PW makes all their profits.

One can, of course, beat PW at their own game, by getting suitably sloshed on alcohol bought for non-daylight robbery prices from Tesco, then go to the bar. To fully carry off this plan, I recommend that you be cognisant of the fact that you’ll be queuing for about half an hour, so make sure you’re not late for the 11pm deadline, and end up having to pay.

The bar has a relatively inauspicious appearance, with shabby, alcohol-stained furniture, and this is matched in the clientele; the majority of which are early 20-something Essex lads wanting to get plastered. Graciously, you barely notice the chavs (and how packed it was) after you’ve had a bottle of wine. 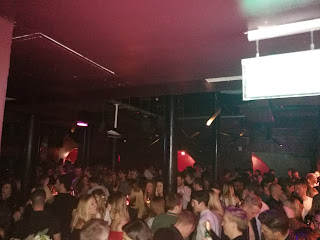 But such is the intoxicating appeal of a place where you can listen to popular music, played live, by people who know their instruments, that I still had an ace time at Piano Works. This video, of a chap's incredible vocals on Circle of Life from The Lion King, speaks for itself: