The financial crisis of 2007-2008 was quite the talking point. People became bankrupt; many lost their jobs and their homes. The haphazard behaviour of bankers cost many people’s livelihoods and the developed world has never fully recovered. Adam McKay, famed for directing entertaining comedies such as Anchorman and The Other Guys, steps into the realms of the big boys with the multi Oscar-nominated The Big Short, an adaptation of The Big Short: Inside the Doomsday Machine by financial journalist Michael Lewis.

My favourite film critic Mark Kermode has a trope he often enlists in film reviews, known as ‘Meg Ryan as an airplane pilot’ (an allusion to Courage Under Fire), whenever he comes across a piece of casting in a film that nobody would buy in real life because the actor is too glamorous or mis-suited to the role. Well, going by that benchmark, there are three Meg Ryan as airplane pilots in The Big Short, with mis-casting so shockingly woeful, these proverbial helicopters would easily crash into each other.

Firstly, Ryan Gosling as a smarmy banker, complete with brunette hair-dye and poor treatment of his Yes-man of an assistant, does not ring true in the least. In films such as Crazy, Stupid, Love and The Notebook, dishy Gosling was in his element playing the dreamy heart-throb. Even in grittier, violent movies such as Drive or Only God Forgives, Gosling is able to transcend his good looks and lends credibility to the role of guys who will travel through the road to hell, laced with good intentions, trying to do what they believe is right. But in The Big Short, as the know-it-all smug Deutsche Bank employee Jared Vennett who spots a loophole in the fragile housing market that he can capitalise on to his gains, he does not convince, and no amount of dark hair or sharp suits will make him a credible banker. 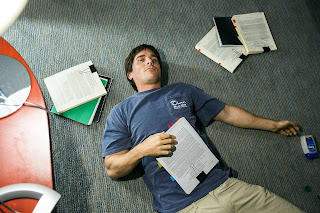 Then we’ve got Christian Bale. Somehow, miraculously recipient of an Academy Award nomination for his portrayal of Michael Burry (although Jennifer Lawrence is on four Oscar nominations now, so, there’s no accounting for taste), a former doctor-come-number cruncher who runs his own asset management company, Bale reaches his intense peaks of American Psycho and The Fighter, but nowhere near the same level of credibility. As his eyes dart around at you (one of his eyes is a glass eye, although I never worked out which) in an attempt to convey Burry’s inability to relate to other people, I couldn’t help but feel faintly embarrassed. The heavy metal music and frenetic drumming that his character has a penchant for are all components in the novel, but by retaining them all in The Big Short for Bale, they do nothing other than illustrate how mis-suited he is to the role. As he is photographed lying on the ground, notes strewn across the floor, I never buy the frame as anything other than an over-cherographed scene of MOVIE STAR Christian Bale, surrounded by some finance notes.

Brad Pitt completes the Holy Trinity of awkward casing. He, like Gosling, has to overcome the hurdle of having to transcend his good looks, and his role in The Big Short is as misanthropic eco-aware Ben Rickett, who, having worked there previously, despises everything Wall Street stands for, but begrudgingly uses his reputation to get a seat at the table for The Brownfield Trust, a small investment firm run by yuppies played by Finn Wittrock and John Magaro. These two lads who a 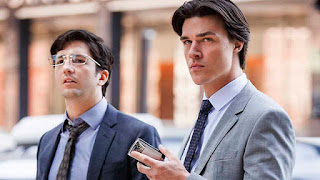 re not particularly likeable in their roles but at least one of the film’s few believable elements, in their earnest, callow enthusiasm, and their interactions with each other as they stumble upon the mess of sub-prime lending are some of the slightly more nuanced elements of The Big Short's shambles of a screenplay. In one scene, Pitt's character lectures Wittrock and Magaro for being excited that their bets against the housing market are coming in, because whilst it's good news for them, it's awful news for many others. This is certainly true, but having handsome Brad Pitt playing morose with nothing but an unconvincing wig deliver it definitely dampens the strength of the message significantly.

Of the A-list poster-billed cast, only Steve Carell escapes with any pride in tact. His character is angry and has a very personal score to settle with the finance world, having a brother who worked there who suicided years previously. Carrell balances the pathos that this loss causes his character, along with amusing comedy of his raging tirades and general poor social etiquette, so that when his character is disgusted by the amoral people in finance and the little caution they throw to the wind when dealing with other people’s lives, we, too, share his disgust. The crew who work for him, which includes Rafe Spall, are also a semi-honourable bunch, amidst all the other wankers, and the camaraderie and fraternity between them, and the way they look out for Carell’s character, was one of the few elements of The Big Short I enjoyed.

Many critics have commended The Big Short’s irreverent take on the subject and off-the-wall execution. Admittedly, there are some effective scenes; the use of Gorillaz’s Feel Good Inc was nostalgic heaven, and the use of pop culture references to depict the passing of time certainly sits quite well. But mostly, the machine-gun, rat-tat-tat, not staying with any scene for too long, breaking the fourth wall and making Family Guy-style cutaways film ultimately gave me a headache.

I love Margot Robbie and Selena Gomez as much as the next person. But to enlist them to dumb down the subprime mortgage crisis to me, when I hold an Economics degree from the University of Bath, was the wrong side of off-kilter, and downright patronising. Margot Robbie, covered in bubbles, tells us that whenever we hear the word ‘sub-prime loan’, we should think ‘shit’. Well, in that vein, whenever someone mentions The Big Short, you should think, The Big Sh…