Turning the well-known story of Sleeping Beauty on its head, Wicked-style, Maleficent tells the story of two lands. One is ruled by a vain King, and inhabited by discontent mortals, unhappy at the extent of inequality facing them (an apt parable for society today, perhaps). The other is full of mythical creatures, including pixies, walking trees and lots of fairies, one of the most prominent of which is the titular Maleficent.

At the start of the film, Maleficent is but a girl, and, given her advanced magical powers, already somewhat of a protector of her land and those in it. She is alerted of a human boy of about her age, Stefan, who has crossed boundaries to her land, and tried to pickpocket a diamond. Confronting him, she forces him to return the diamond, but, despite the compromising circumstances in which they meet, she comes to like him. He, like her, is an orphan, and, when he accidentally singes her with his iron ring, throws it away as a gesture of goodwill. Maleficent is deeply moved by this, and the two become friends, and then lovers.

However, whilst the young Maleficent is a romantic, Stefan is more of a pragmatist. After he hits adulthood he leaves her to fulfil his ambitions, and makes his way up to become one of the King’s cronies. On his deathbed from a failed siege of Maleficent’s land, the King promises he will name his heir and betroth his daughter to anyone who can slay Maleficent. Stefan is fond of Maleficent, but he is much, much fonder of power and glory, and, whilst he stops short of killing her, abuses her trust, drugging her to sleep, and cutting off her wings so as to give the impression that he did indeed slay her. And that is where our good girl turns into the embittered, malevolent figure of villainess that we remember from the Disney cartoon.

Hot on the heels of last year’s multiple-Oscar-winner Frozen, Maleficent is another Disney movie that subverts the conservative ‘girls need a Prince Charming to swoop in and save them’, and instead, promotes solidarity between sisters.

The central dynamic here is between Jolie’s horned fairy ruler and Elle Fanning as Aurora, the good-natured, trusting princess whom she had cursed as a baby. Both are well-cast; Jolie’s English accent is spot-on and she delivers her sarcastic lines with relish and genuinely instills fear into the audience. We genuinely believe hell hath no fury like a fairy scorned.

Elle Fanning impresses in a role that, in just about every other young actress, save perhaps Hailee Steinfeld, I would have found extremely grating. Aurora is naive, bordering on gullible (in one brilliant display of dramatic irony, she calls Maleficent her ‘fairy godmother’), but Fanning's winning smile and sweet performance keeps her endearing rather than dopey. The relationship between the two is the strongest part of the film, and when Aurora comes to learn the horrible truth, it is genuinely emotional; we feel as disappointed as she does. 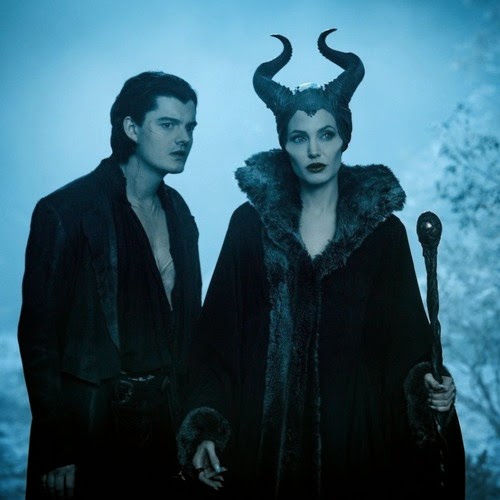 Whilst the leading ladies are well-cast, the supporting men is more of a mixed bag. As Diablo, Maleficent’s sidekick raven, Sam Riley is an inspired choice. I’m so used to seeing him in offbeat indie movies like On The Road and Control, so to see him in such a high-profile blockbuster was a delight in itself. Diablo is a bird Maleficent rescues, with the view to becoming her wings after her’s are stolen from her, and whilst Diablo goes about his tasks, he is not afraid to question his mistress and give her lip back, elevating him into a much more interesting character than the standard Crabbe/Goyle-type yeomen.

However, as King Stefan, Sharlto Copley is a bad, bad choice. I feel the film’s casting directors missed a trick, because, whilst we’re obviously not supposed to sympathise with the man who broke Maleficent’s heart and betrayed her trust, there’s nothing wrong with making him dastardly handsome, just to yo-yo with our loyalties a bit. Copley is unattractive, and sports an angry Scottish accent. As such, I was firmly on Maleficent’s side, no matter how horrible her actions. Not ideal.

The middle act of Maleficent dragged, and some of the dialogue is pure cheese (such as when Aurora meets the young pup who we believe to be her Prince Charming). I was also somewhat underwhelmed with the three good fairies; I adore Imelda Staunton and Juno Temple, and cheered inside when I saw them. But whilst I found them amusing, I feel their foolish antics somewhat outstayed their welcome in the film, as did the meandering sequences where Aurora gets to see Maleficent’s kingdom.

That being said, the fantasy action sequences are nothing short of breath-taking: hyper-energetic and thrilling without being overly violent, and the showdown finale was brilliantly staged. All in all, a good popcorn movie that was a little on the indulgent side, but it promoted empathy and girl power. And that’s never a bad thing in my eyes.