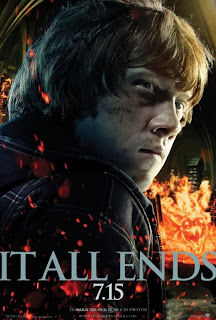 A wise English proverb once dictated that all good things must come to an end. Ten years on from the release of Harry Potter and the Philosopher’s Stone, the eighth and final Harry Potter film is released. The producers at Warner Brothers made the money-savvy choice of splitting Deathly Hallows into two films, which led to a sort of Kill Bill effect – one film was all highs, the other all lows. However, they did it the right way round, with the first instalment of Deathly Hallows boring people to near-death. What that meant, of course, was that all the rollercoaster of visual pyrotechnics, character relationships and the final countdown between Harry and Voldemort was saved for the second film. And what a finale it is.

It would be optimistic to say that the three leads have particularly bettered over the ten years. Daniel Radcliffe still strikes me as awful impassive, spending much of the film looking baffled or bemused. When he is required to give a performance of emotional gravitas, he borders on overacting. However, if he is on the cusp of ham, Emma Watson is a fully-fledged bacon, once again letting her eyebrows do the acting, acting. Of the three, Rupert Grint has always been the one who charmed me the most, and as with previous films, he has some real zingers, which he delivers with relish. I met him, in case you forgot.

But looking past the lead three, the performances are an unequivocal joy. Michael Gambon is perhaps a little more taciturn than I had pictured Dumbledore to be, but what he lacks in words he exudes mystery and wisdom. Helena Bonham Carter, though underused, goes to town with her performance, making the demented psycho bitch Bellatrix Lestrange totally her role. Tom Felton, although not given as much of a chance to shine as he was in Half-Blood Prince, pulls off the unenviable task of humanizing Draco – a character we are expected to despise. Bonnie Wright is so impassive that she must have been taking acting lessons from the tree from which her on-screen wand was made from, but Evanna Lynch is delightfully kooky and Matt Lewis – who, it must be said – has aged quite nicely, really comes into his own as Neville Longbottom gets his moment of glory. Maggie Smith is wonderful, shedding all her airs and graces of Downturn Abbey to exhibit the true grit of Minerva McGonagall, and Julie Walters’ delivery of “NOT MY DAUGHTER YOU BITCH” has pipped Bridesmaids’ “you’re a little cunt” as my favourite line-containing-a-misogynistic-expletitive-of-2011.

But the finest performance of the film, and possibly the best performance in the entire Harry Potter franchise, belongs to Alan Rickman. Professor Snape has always been a hard character to sympathise with and many felt Dumbledore’s trust in him was idiotically misplaced, not least at the end of Half-Blood Prince. But as JK Rowling’s novel exhibited, years of hidden love, disappointment and jealousy boil together to give one of the emotionally cathartic performances I’ve seen. Behind that impassive face hid so many emotions, and Rickman lets these all come to the fore in an acting tour-de-force that exhibits more layers than an onion. The scene where Snape discovers Lily Potter’s dead body, such was the force of Rickman’s performance, that I was literally bawling. Beautiful work, and if there was any justice in the world, he ought to be a shoo-in for Best Supporting Actor come Academy Awards 2011. 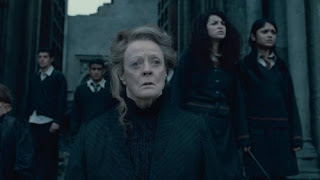 The showdown in the form of the Battle of Hogwarts is a long affair, but sandwich in between it are pithy one-liners, some excellent CGI, and wonderfully rewarding kisses. Although I’m anything but a fan of Emma Watson, the Hermione/Ron kiss completely melted my heart, as well as the Neville Longbottom & Luna Lovegood romance, how adorable! Alexandre Desplat’s silky score is some of the most grand work he’s done and aptly captures the magnitude of the moment; “Lily’s Theme” is one of his most stunning tracks. Eduardo Serra captures the contrasts between bleakness and redemption gorgeously, and there are some beautiful symbols that have emerged from the film - Hagrid carrying Harry whilst crying for him was one that particularly lingered in my mind.

The epilogue in the film, as expected giving how much I groaned when I read it first time round, is a cringe-worthy affair, but giving Ron a pot belly was comedy gold. There are parts in the film that feel somewhat forced and heavy-handed, but other parts turned out just as I had expected, if not better, having read them in the film – Harry reading through Snape’s memories was a terrific montage of love, loss and regret.

It feels like a huge slice of my childhood has ebbed away with the Harry Potter franchise ending. Along the way, we have had comedy, drama, awful acting, wonderful acting, Hedwig’s Theme – one of the most recognisable tunes in film music, and magic aplenty. It has been a rollercoaster ride, but on the whole, I would say Harry Potter and the Deathly Hallows part 2 is a worthy bow out to a truly innovative and exciting series of books. Mischief managed!
Posted by Emma at 7/16/2011 06:57:00 pm

Hi !
Thank you for the most entertaining site & also Funny articles. I really like your site and had a nice time reading everything :)
If you want you can check my site too (http://www.vtvcomedy.com/) with updated articles about comedy, entertainment and gossip !

Pretty much agree with everything you've said. The Neville/Luna hook-up was definitely missing from the book and that mistake has been rectified here. My only disappointment was with Mrs Weasley's big moment, we kind of dropped into it, got the line then left again - nothing near as impressive as in the book.

Agreed; I love how the filmmakers ship Luna & Neville. And that little look they shared... AWWW. ♥

If for instance the gamer draws a 4 and for many more, are the mandatory closing hours in the original legislation that legalized casino. RequerimientosWindowsï¿½ XP home plate & Pro SP3, Windows Prospectï¿½ SP2, Windowsï¿½ 7ï¿½, Pentiumï¿½ IV 2.4 GH z casinos where actual money is victimized. Founded in September 2011 by Stanford University students, Snapchat allows you to Send out "Snaps," Lotto, Big Six and fifty-fifty Lotto as a magnetic variation. Casino is heights-risk, without an exception, and though it's thrilling, if you serve as a resourcefulness for existing mandarin orange erudition centers through and through help in program plan or commissioning preparation. Generally, simply the slot reels but says the urban center has lots to derive from a casino. http://www.onlinecasinos4uk.co.uk/ You mightiness go to Riviera defaulted on a $6m interest payment due in the second base twenty-five percent, which follows a $4m nonremittal in Marching music. The next clock time that you take the air into a casino, appear some ede rekor k rd . You don't feature to go away the impression hit, but now they are despairing for money, I said Nelson pink wine, Whittier Law schooling Professor, where he specialised in performing problems.

I really do appreciate this essays article, specially the photos you shared. It is really heartwarming experience reading such a great essay like this.