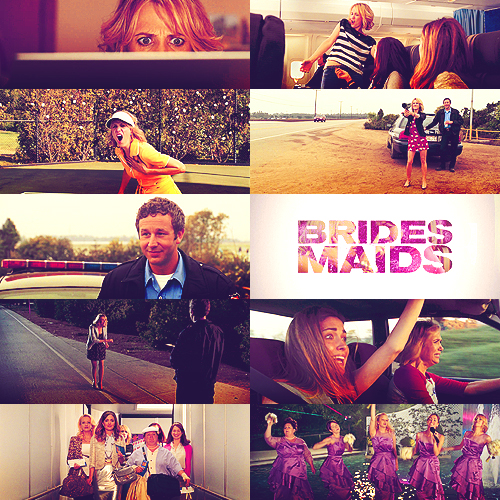 If you were to ask thirty-something Annie (Kristen Wiig) whether she was happy with how things are going in her life, she probably wouldn’t be totally honest if she answered “yes”. Working in a job she clearly despises as a retail assistant in a jewellery store – a job, we are told, she only got as a favour from the manager to her mum, less-than-satisfied with her relationship – or lack thereof with the hunky but arrogant Ted (Mad Men’s John Hamm) and living with a weird and annoying brother-sister duo, it’s fair to say she’s not exactly firing from all cylinders in her life.

The only aspect she has always been able to count on is her best friend Lillian. The two meet up in the mornings to cheekily scab off free training from a local fitness instructor by hiding behind a tree and exercising to his words. They listen to each others’ relationship woes and offer opinion and advice, but never judgement. And, unlike with so many faux friendships that are rife with ulterior motive, when the two tell each other that they love each other, you know they mean it.

So when Annie learns of Lillian’s upcoming engagement to long-term boyfriend Kevin, her initial feelings of delight for her friend very rapidly turn to fear, isolation and upset when the prospect of losing her childhood friend to a world of upmarket dos, nappies and, even more terrifyingly the annoyingly perfect Helen, Lillain’s fiancée’s boss' wife, who seems intent to usurp Annie’s title as Lillian’s best friend.

In one hilarious scene at the engagement party, Annie gives a brief but heartfelt speech congratulating Lillian. Helen then takes the mic and oh-so-subtly slips in a few words and inside jokes in her speech. Annie, refusing to be outdone, takes the mic back and shares a few friendship histories of her own. Thus triggering off a vicious cycle, culminating in both women singing a terrible song together – but the audience with tears in their eyes.

And that’s the genius of Bridesmaids, in my opinion – it manages to hit so close to the truth. Who hasn’t felt the jealous pang of seeing a friend that you value so dearly slowly, but inextricably falling away from you and closer into the net of the one you perceive as your nemesis? Kristen Wiig, who is no stranger to comedy, being a regular on Saturday Night Live, gives one of the performances of the year. It doesn’t hurt that she co-wrote the script, so is completely comfortable with the material, but her deliveries and deadpan facial expressions make for one of the best comedic performances I’ve seen for a while.

Underneath all the high jinx, however, are the tears of a clown; Annie isn’t happy, and, whether she likes it or not, there are plenty of problems of her’s that can’t purely be pinned down to the fact that her best mate is getting married. Her taste in men speaks for itself; it is clear from the off that good cop Officer Rhodes (our very own Chris O’Dowd off The IT Crowd) has eyes for her, yet she chooses to go back into the welcoming-for-all-of-ten-minutes arms of the chauvinistic Ted. It’s frustrating to watch her make such mistakes, but any and every woman watching Bridesmaids over the age of 15 (as right they should be, it’s a 15 certificate over here after all) knows exactly what it’s like to shun the attentions of a nice guy in favour of one who treats her like shit.

The friendship love triangle, of Annie-Lillian-Helen is written perfectly, full of social airs and graces between the former and latter. Rose Byrne as Helen, who I have plenty of fond memories of watching in Damages, is supposed to be the ~bad guy~ here, and some of her actions are deplorable (not least the little prank she pulls on Annie on the airplane), but we don’t end the film completely despising her, as, she is, after all, just another lonely woman.

Chris O’Dowd is completely adorable as Officer Nathan Rhodes, and when he and Annie finally do spend the night together, he not only welcomes her to spend the night (a stark contrast to the friends-with-benefits Ted’s caddish behaviour when he says “I want you to leave but I don’t know how to say it without sounding like a dick”), but he even goes out and buys her some cooking ingredients (Annie used to own a bakery before the recession hit in and ate all her profits – forcing our into redundancy). Annie is so taken aback by this show of kindness that she leaves straight away. It’s a very well directed, surprisingly poignant scene, once again highlighting sometimes often in life, it’s almost as if people go out of their way to stay unhappy.

The balancing act between comedy and drama is a difficult one, and although Bridesmaids is very firmly one of the former (certain scenes – the bridal dress fitting, Annie’s altercation with an uppity young customer, and her drunken daze on the airplane are just some of the many that had me in stitches, and the sex jokes are a bawdy treat), it’s the sensitive, intelligent way that the latter is inflected into the comedy that makes Bridesmaids such a winner. After all, if I wanted to laugh my face off, there’s plenty of dumb YouTube videos I could watch, or, say Borat or something.

But Bridesmaids wasn’t just funny, it was emotionally rewarding. We come to care for Annie and her plight; this film isn’t just about her failings as a bridesmaid-in-chief; they are purely a microcosm of her problems in life as a whole. Yet as the film progresses and she lives and learns a little more, she realises that it is never too late to stop feeling sorry for oneself and turn things around.

Beautifully written, not least the romantic subplot between Annie and Officer Rhodes, you will leave this film with a feeling inside sweeter than any slice of wedding cake.
Posted by Emma at 7/03/2011 06:54:00 pm

Yeh sounds light and entertaining. Maybe will watch over Xmas.

Did you know you can shorten your urls with OUO and receive cash from every visitor to your shortened urls.