Barry Egan (Adam Sandler) is a bit of a loser. He buys pudding just for the frequent flier miles even though he doesn’t have any where particular to go, and breaks things in random bouts of self-loathing. And in his loneliness, he calls up a sex line run by some crooks in a nearby Califoronia town. And that sex line calls him back, blackmailing him for money. At the same time, he finds himself tentatively courting Lena, a woman almost as damaged as he. Together, they form an unlikely, and very sweet romance. 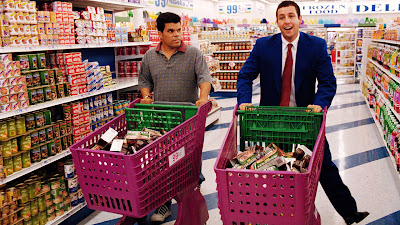 Punch-Drunk Love is dark and mature, most unlike the stereotype of Adam Sandler’s other work. But in a more dramatic role, the man thrives. Kitted out in a jarring bright blue suit and sporting a whole arsenal of odd little mannerisms, Sandler is very convincing his depiction of a weird but oddly lovable man who deep down has a heart of gold and only acts out due to desperation. Emily Watson is just as well cast as the kooky, jaded, but adorable Lena. Philip Seymour Hoffman steals the show as the mastermind behind the sexline con, with his self-important strut and devil may care demeanour. The supporting cast are all excellent, and we ourselves really feel the sense of stifling that Barry Egan suffers due to having so many pushy sisters.

Punch-Drunk Love is an impressive, offbeat, bizarre film that offers a whole whirlwind of emotions in the viewing experience. The music and script are sometimes almost distractingly random, but that suits the disjointed style of the film. Furthermore, the fusion of comedy, romance, drama, violence all plays out to be an enthralling little number. Plus, I’m willing to bet money that you were totally rooting for Barry when he defends his woman’s honour with a crowbar; I know I was! Delicately, sensitively written and maturely directed, Punch-Drunk Love is a punch-drunk masterpiece.
Posted by Emma at 6/09/2011 08:28:00 pm

And I'm seeing you tomorrow... so much activity from you!

lol. I *love* movie blogging, it's legit my entire life. I mean, that's 99% of the reason why I'm travelling to Norf Landan tomorrow to see you (the other 1%'s your company, I s'pose), because you always have the best movie recommends! But my life's a mess, I'm a mess and I've just not had the time. But that will all change this Summer. PROMISE.

Beginning sounds doubtful, but ending in a recommendation? I'm starting to get the giste of your reviews Emma!

Unknown said...
This comment has been removed by a blog administrator.
3:50 am

I think the admin of this website is really working hard
for his website, because here every data is quality based stuff.