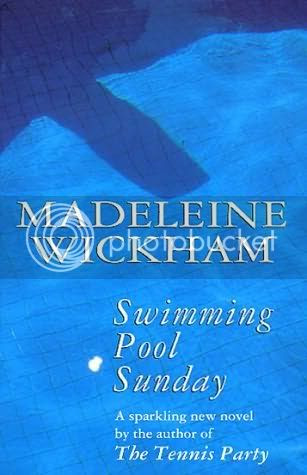 Louise Kember, separated wife and mother of two, decides to spend a hot Sunday afternoon with her daughters, Amelia and Katie, at the pool of wealthy local family the Delaneys, who open it once a year for charity. Sounds reasonable enough. Except that Sundays are supposed to be the day the girls spend with their father, Barnaby. He had made intricate plans of his own to go fishing with his girls, and now that his plans have been scuppered, he, hurt and bitter, is at the house to glower at Louise resentfully. However, the air soon turns even more sour when their youngest Katie fatally injures herself trying to dive, and suddenly the ill-feeling between Louise and Barnaby is just the beginning in the ensuing recriminations and drama that follow.

Madeleine Wickham (the real name of the author who, under alias Sophie Kinsella, penned the terrifically enjoyable Shopaholic series as well as one of my favourite chicklits of all time, Can You Keep a Secret?) generally tends to write in a slightly darker tone for the few books she’s released under he true name, and with the themes of greed, discontentment and grief in Swimming Pool Sunday, this is no exception. Furthermore, whether as Kinsella or Wickham, the author picks London as the backdrop to most of her stories, particularly the Chelsea/Kensington/Fulham area, where one can only assume is where she grew up.

However, she chooses to set this novel in the countryside, something the protagonist Louise is less than satisfied with. After the initial romance experienced with her estranged husband Barnaby, comes the less-than-glamorous minutiae of being a mother. For someone who was once involved in the glitzy process of aiding her father in running for elections, this contrasts starkly with the life she’d dreamed of having, and her resentment at Barnaby’s willing to “settle” for a simpler life is one of the chief causes of their falling apart. Another is the arrival of a smarmy but sexy lawyer Cassian, who immediately sees Louise’s political connections as a route into getting what he wants. It is he who suggests that Louise and Barnaby sue the Delaneys for Katie’s accident, and after some swift and ill-advised thinking, the beleaguered parents are soon on board.

In the Delaney’s household, however, they have a lawyer acquaintance of their own, a far more sympathetic character in the form of Alexis, a mature, older man who immediately senses something may be wrong and tries to do all his can to prevent the Delaneys – who have suffered loss of their own when their son died of a blood clot in his brain – from having to pay for an accident that arose from them trying to do a good deed for charity. This good lawyer/bad lawyer dynamic raised between Alexis and Cassian makes for a intriguing read, and Wickham is clever not to succumb to the much-documented cliché of depicting all lawyers as soul-sucking mercenaries. Alexis himself has a relatively engaging sub-plot involving his Summer romance with a beautiful-but-naïve local musician, Daisy, although Wickham seems unsure as to what the purpose of this little mini-romance is.

Although the novel took a while to get started, once the ball was rolling, we were into the territory that Wickham writes best – about humans, human flaws and doubts, and human interactions. Neither Louise nor Barnaby are bad people; they are, in fact, both good (only Cassian is the downright bad character in the story), but ones who have let their folly shape their paths in the past. People taking their anger out at one person by treating other’s badly is nothing new, but in Swimming Pool Sunday, Wickham allows for them to realise the error of their ways and rectify it before they make the same mistakes again. A satisfyingly deep read.
Posted by Emma at 5/23/2010 08:23:00 am