Life’s not looking too good for bland Joe-everybody François Pignon, long-time employee of a condom factory. He’s been without his ex-wife for two years, and his teenage son won’t have anything to do with him. He’s teetering on the verge of suicide when he discovers that his company are making downsizes, and he’ll soon be made redundant. However, his kind old neighbour (Aumont) comes up with a plan that will possibly save Auteuil's job – for Auteuil to come out of the “closet” so that his sacking will seem like an act of homophobia, so keeping a hold of his job. As a result of their lie, further misunderstandings and confusions arise, chiefly involving the company’s alpha male (Depardieu) and Auteuil's boss Laroque, that lead the protagonist to learn things about the people around him, and find out about himself too. 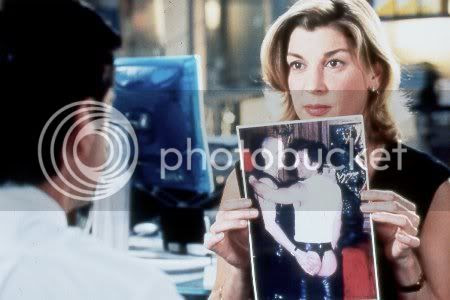 The cast are a total treat. Daniel Auteuil is great in the loser role that has been so well perfected by William H. Macy, transforming a character of, at the start, no interesting qualities, dull and foolishs into a spirited and amusing hero. Depardieu goes to town with his caricatured character, a homophobic, self-proclaimed macho man who fears/resents Auteuil initially after his claims of being gay. Michelle Laroque, from Ma Vie en Rose, makes an appropriately pretty love interest. The plot may be gossamer thin, but the cast give some of their best performances and deliver comedy gold to maintain a lively tone throughout.

There are those who immediately disregard foreign films for being too hard to understand, too prim, too stuffy. And indeed some of them are. But Le Placard is the complete antithesis of one of those type of movies; it refuses to take itself seriously, and has great fun in the process. There are countless laugh-out-loud moments (the process of fabricating the “gay” photos, all the interchanges between Auitiel and Depardieu, etc) in Le Placard, but my favourite of them all is probably the gay rights march, where Auitiel is sat on the top of an open top bus wearing a condom on his head. This amiable and amusing film is delightful as it plays around with themes of homophobia, political correctness and work politics, and whilst it never delves into the layers of these topics, it remains entertainingly satirical. Unassuming and witty, Le Placard is one of my favourite films to watch when I’m down, because it never fails in cheering me up.
Posted by Emma at 10/20/2008 07:43:00 pm

the first sentence of this review was pure gold. And I will watch this :D

oooh it was so embarrassing today...I was doing speaking practice with our french assistant and she was asking me about cinema, and I was like, yeah one of the most famous french stars was georges depardieu. And she was like, you mean gerard? I just sank down in my chair and groaned...what a mistake!!! My brain was so not functioning!!!

Aww it's not a boring story! And I totally sympathise; on more than five occasions have I made movie related faux pas. For my Spanish oral mock on Almodovar, I said something about how great Penelope Cruz was in Jamon Jamon. Almodovar didn't even bunging direct that movie! Fail.

I need to have a movie night for myself, I am without a laptop (bloody thing crashed) so need to entertain myself the old fashioned way. Are you still interested in coming to see me Emma? If so, please text me with the number I gave you over LJ since I won't be able to read e-mails (this internet cafe computer is slloooooowwwwww...)

Drat my phone's all out of credit, so I hope you're able to read this, but yep, I'm still totally interested in coming over; the only reason I've not brought it up recently is 'cos I've been searching everywhere for cheap flights! As soon as I book one for under £30, I'll tell you asap! Can't wait! :)

Anonymous said...
This comment has been removed by a blog administrator.
9:54 am

i love this film, thanks for bringing it into my life

I just adore Gerard Depardieu - very sexy! Looks like exactly my type of movie, thanks will get this for sure.

Nice blog and posting. keep sharing with us.. You can visit my blog too..

A must reаd poѕt!
Feel free to visit my homepage - myearnmoneysite.com

It can, however, be pre-ordered, as its release date is in the near future.
There is an opportunity for parents to offset the teacher: pupil ratio
through practice at home. ' The Rooneys are a great family who turned a football franchise into a traveling nation full of fans across the United States. I don't want an
strange voice to order me around. Cons. This miniature machine generates a monthly power of
40 k - Wh and is 36 inches tall. Talcahuano.
FIFA has stated that a player named as a goalkeeper can only play in goal
and that this rule will be enforced. * You're realistic about what you expect from others. Two people have a heated argument, voices raised, vocalized obscenities, hearts racing ' obvious discord all rooted in
fear.

Have you always wanted to start your own business since
the days of your childhood lemonade stand. Using Skype for
business use is a great idea for many, however there are always
cons to the use of anything that says it is free.
You can find coupons for all of these, if you look.

The film director is the movie production job that you will likely be most drawn to if you are interested
in creative filmmaking as the director controls the creative work of the film.
Although it can be the easy, fast, and simple choice, keep in mind that for the cost of that one meal, you can partake
in at least one other activity on another day. This is not wedding photography and
not designed to replace your Photo Booth For Wedding photographer but rather to supplement your photographic memories of your wedding day and provide a special
gift for all those attending your party.

And Ouya, which is about the size of a Rubik's cube. Port forwarding lets you specify which ports the game needs to perform at it's best.
It can go as far as ruining their experience since it is the last interaction they have with a game.

If there's a real lesson here, it is that you should make a reasonable profit on a regular basis selling books or anything else, and once in awhile you'll get an unexpectedly nice payday.
The main question is, do you really believe in what you have to sell to such a degree that you would invest
in one yourself. However Cash for Electronic Scrap do
not accept whole PCU, hard drives, laptops, VCRs,
monitors, single boards, camcorders and digital cameras.

I am truly thankful to the owner of this site who has shared this impressive paragraph at at this time.

I like the helpful info you provide in your articles.
I will bookmark your weblog and check again here regularly.

I am quite certain I will learn a lot of new stuff right here!

Best of luck for the next!