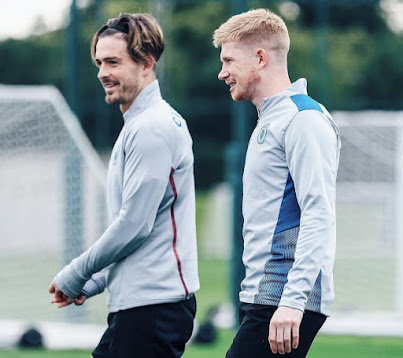 BBFC rating – U (mild angst)
Author's disclaimer: I don't know De Bruyne, I don't know Grealish. This story is purely the fantastical whimsy of a hyperactive imagination. All feedback welcome, good or bad. If you like the story, let me know so it incentivises me to keep writing!
When Kevin De Bruyne was at school, he had learnt in his Physics classes of something called Brownian motion.
It was the random, unpredictable nature of particle movement: up, down, left, right, and all over the place.
As Jack Grealish laughed with Phil Foden in the changing room, the £100 million man holding the smaller Foden in a headlock for no discernible reason other than that it was funny, De Bruyne reflected how this scientific principle was a pretty apt descriptor of his vacillating feelings towards City's new record signing.
One moment, De Bruyne found Grealish charming. The 25-year-old Englishman had an open, very readable face, with large brown eyes that exuded spirit and warmth.
Other times, such as in his tussling with Foden right now, KDB found Grealish frustratingly immature. The principal reason Grealish had been bought into an already packed attacking midfield was to help City win the Champions League, and that wasn't going to happen if he was mucking about all the time.
De Bruyne reflected, with a slight resentment, at how life just seemed so much easier for the Jack Grealishes of the world than it did for him. He wondered how much of that was good-looking privilege, which Grealish carried in spades.
And then there was that primal, territorial streak in KDB's blood. Although Jack Grealish and he didn't play in identical positions, the Belgian was wary of his own advanced age compared to the Englishman's. And, conscious of his own injury record, KDB knew that all it took was a savage tackle from an opponent player, and then Grealish could well usurp him in a system where, with such a capricious manager, nobody's place was guaranteed. Not even his.
These had all been reasons why KDB had kept a respectable distance from Grealish in his first week at Man City. De Bruyne had been professional, polite, and courteous towards Grealish. No more, no less.
But that wasn't the only reason why De Bruyne had been so actively distant.
Prior to Jack Grealish joining City, the Englishman had hardly been shy about voicing his admiration for the Belgian's talents. In any interviews where he could, Grealish had put KDB's name on his lips.
His enthusiasm for De Bruyne shone through his expressive face every time the Belgian's name was mentioned. In an interview before the 2020 Carabao Cup final, Grealish had blushingly revealed that De Bruyne was his favourite City player. And, given that David Silva and Sergio Agüero were still on City's books back then, KDB had been very flattered by that effusive compliment.
Although De Bruyne was much more reserved about it, the admiration went both ways. As a big lover of the game, he had himself studied other players in his down time, during his injury spells. And Jack Grealish's dribbling had impressed him a lot.
Deep beneath this rich cocktail of feelings: envy, frustration, wariness, admiration and feeling flattered by, KDB knew that he was harbouring another emotion towards Grealish, which he wasn't quite ready to admit to himself.
So, he kept himself distracted by the focusing on the feelings that he could unpack. And the feeling at the forefront of his mind right now, was finding City's new number 10 annoying.
"We should go outside now", De Bruyne said curtly as Grealish was now messing with Foden's hair. "The gaffer doesn't like it when we're late."
Grealish instantly removed Foden from the headlock and looked sheepishly into De Bruyne's eyes. "Oh, good idea, Kev-in," he said, and then cringed, at how he'd wanted to call him "Kev", but then, unable to commit, attached the second syllable too late.
Posted by Emma at 8/10/2021 09:32:00 pm

Anonymous said...
This comment has been removed by a blog administrator.
9:46 am

How can you tell I'm posh?

How can one not tell that you are posh?

Emma said...
This comment has been removed by the author.
1:34 pm