After Chelsea beat Manchester City to become Champions of Europe for the second time, it was only natural that I was in a celebratory mood. As this win coincided with the restrictions being lifted in the UK, I decided to combine celebrating my club's win, with making the most of the momentary freedom we were being granted.

I did not choose well. This was some of the food below: 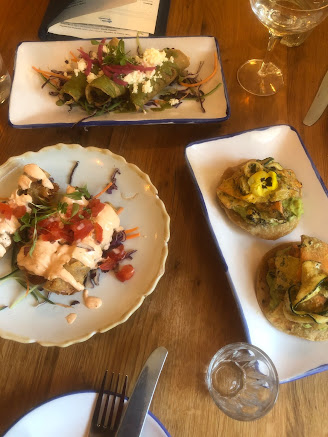 In the chicken tinga tacos dorados (pictured on the left), the chicken was horribly dry and not at all seasoned. The tacos encasing them were soggy, meaning too much oil, and not enough invention had gone into the preparation of them.
For £9, I consider that a massive rip-off, considering you can get a burrito that's full of meat, vegetables and rice, from various pop-ups across London. Alternatively, you can get an oven or microwave Mexican meal from Marks and Spencer for the same price, and once cooked, that will be exponentially more delicious and filling than this monstrosity of a chicken dish.

The grilled vegetable tostadas (pictured on the right) were really lazily cooked. The courgettes tasted low quality. The greasiness of the tostadas told me that the cooks had just drenched them in oil, in lieu of any real care towards the preparation.

The baby potato tacos dorados (top of the photo) cost £8.50, but I ate the plate in about four bites. The dish was all smoke and mirrors, and containing very little actual carbs (which is silly as it's not like potatoes are even an expensive ingredient)! Half of the plate was filled with uncooked vegetables to try and conjure the pretence of there being more food than there was. I do not appreciate being misled.

The best part of my order (or should that be, the least bad?) were the hibiscus enchiladas, (not photographed). Of all the dishes sampled, this one came the closest to some semblance of Mexican food,  But at £15 for three, this was, like everything else on the menu, as massive rip-off.

The drink selection was bland. The cocktails were quite nice tasting, but at £11, horrifically overpriced for the meagre quantities of alcohol in them, and it didn't escape my attention that most of my tumbler was filled with ice. I'm not happy about paying £11 for ice!!

The service was also sub-par. Bearing in mind that I visited when the lockdown restrictions were only semi-lifted, and so indoor dining was allowed for just a limited number of diners. So it's not as if the waiters were being rushed off their feet. But the hibiscus enchiladas arrived much later than the rest of my orders, when I'd wanted to get everything together so I could take a photo collectively.

It would have been nice if the waitress had told me that the enchiladas were going to arrive late, but instead, I had to nudge her twice to remind her that I'd ordered it. Unsurprisingly, when it did arrive, the morita that the enchiladas came in was lukewarm, showing the plate had been sitting in the kitchen for a while, and she'd probably forgotten about it.

This was an awful dining experience, and after parting with all that money, I was still hungry. Save yourself the expense and go to Chipotle instead. For £10, you'll be much better dined, and not have to be ignored and subject your poor taste buds to overly-greasy, shoddily prepared food.

To add insult to injury, this place had the temerity to add 12.5% service charge to the bill! We're not in the States; I take umbrage with restaurants presumptuously helping themselves to a tip. If I was happy with my meal, I will gladly fork out a tip. But in the UK, restaurants shouldn't consider it a given. Especially one where the food was as bad as Santo Remedio, and the waiters were utterly disinterested in delivering the food.