Every July, comes Christmas time for film classification nerds, when the BBFC drop their annual report. We love to pore over the report, read between the lines at the BBFC’s evasions and obfuscations, and the PDF enriches our appreciation of film classification, whilst teaching us a thing or two about film overall.

As my Oscar predictions show, I’m somewhat keen on predicting film-related things. Thus, using my experiences of the 2018 UK releases I’ve watched, my observations from how people have interacted with the BBFC Twitter account, and word of mouth from others, here be the 2018 UK releases that I think got the BBFC the most feedback last year. Point of clarification: by '2018 UK releases', I refer to films that came out in UK cinemas in 2018. Something like The Favourite, which had a 2018 US release date, came out here in 2019, so wouldn’t count. You can expect to see complaints for that in 2019's BBFC annual report!

Obviously. I was shocked that this was a 15 when I watched it, for its scenes of sexual violence, torture and violence. The short insight ‘strong bloody violence, gore, sexual violence, sex, very strong language’ pulls no punches, and this was after cuts to the original version to save it from getting an 18.

But even with the cuts, to a garrotting scene, that did very little to reduce the overall nastiness of the scenes of rape and violence that I detailed in this blog, and an extremely skeevy vibe, in a film where women are forced into ‘whore school’ and taught to use their bodies in order to procure government secrets.

It’s just a seedy, nasty film that has no business hanging around at 15, even if the 15 is considerably hardened to these days to what they can facilitate in terms of adult content, compared to in the 70s.

Going from the minutes of BBFC meetings, there were also no shortage of complaints about this live-action adaptation of Beatrix Potter’s books, and, shockingly, the complaints weren’t over how annoying James Corden was in it.

Several parents were perturbed by the way the rabbits ganged up on a human (presumably played by Domnhall Gleeson – such is my fangirlism that I’m purging from my mind that he ever had anything to do with this abomination and outright refused to watch it). Parents were particularly affronted by the way a farmer’s allergy to blackberries was weaponised by the rabbits, worrying that a depiction of this in films could lead to ‘allergy bullying’ in school playgrounds.

Whilst I think the sheer volume of all of these gripes to the BBFC is a tad excessive, the poor taste of using someone’s allergy against them is pretty consistent with what you can expect to see in any James Corden stand-up routines, and so, if these complaints reduce the quantity of people bankrolling James Corden’s undeserved, fraudulent Hollywood career, I’m here for it.


03. Show Dogs
A third film with an animal in the title! This film, which I watched purely for BBFC purposes, was about a cop, Frank (Will Arnett) and a police dog, Max (voiced by Ludacris) who go undercover in a dog pageant to try and find out who’s been kidnapping rare pandas (yes, the plot really is that contrived).

Show Dogs came under huge media scrutiny due to a running gag which many parents found highly contentious to be shown in any movie, let alone a PG-rated one. As part of Max competing in the dog show, he has to get used to his genitals being inspected by the judges.

Max is a gruff Rottweiler who’s used to solving cases, so the idea is that this is played for laughs. But the execution is extremely shady – Frank tells Max to go to his happy place whilst Frank gropes his privates, and parents thought this act recalled child molestation indoctrination, with how children are told to go to their happy place to ‘remove’ themselves from a grooming situation. Max then does just that during the pageant show, as his way of coping, and there's a drawn out scene of what he's daydreaming about whilst his genitals are being inspected.

As I sat through this horrendously unfunny, drawn out, implausible film just to judge the scenes' appropriateness for PG (I agree with parents, they are insidious af), I was able to record the questionable scenes in question. Watch it and judge for yourself: un et deux.

The scenes were cut from the US release of Show Dogs following parents' complaints after its release, but true to their stubborn form, the BBFC refused to remove them from the UK version, saying there was nothing overtly sexual about the scene.

04. A Northern Soul
The majority of complaints the BBFC get are from people who felt a film was rated too low, as Red Sparrow and Peter Rabbit’s complaints will be about. Complaints that a BBFC rating was too strict are rare to come by (although I did my part in trying to balance this out, when I queried why Battle of the Sexes was a 12A and not a PG and subtly implied the BBFC were being homophobic).

The complaints for A Northern Soul will be another of these rare commodities. The film contains around twenty usages of the f-word and got a 15. At 12A, the guidelines state that ‘Strong language may be permitted, depending on the manner in which it is used, who is using the language, its frequency within the work as a whole and any special contextual justification’. 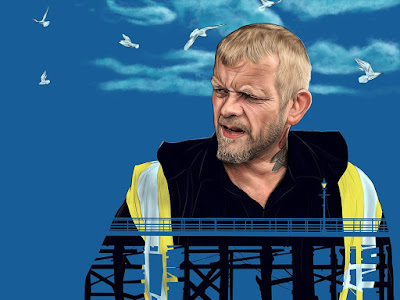 To keep a PG-13 rating, this means you can say ‘f_ck’ at most, twice, over the course of the film’s run-time, but the BBFC and IFCO aren’t as rigid about this – they passed About Time, which had six usages of the f-word 12A, and The King’s Speech also got 12As in the two countries, despite multiple usages of the f-word, with the mitigating factor that it was said in a speech therapy context (it even says this in the short insight, one of my favourite descriptive short insights of all time): 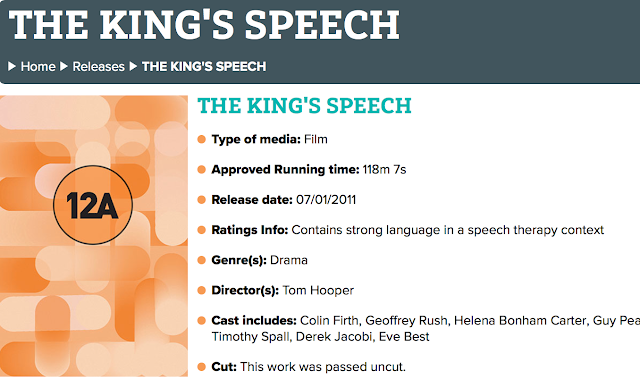 Due to this flexibility from the BBFC, the producers of A Northern Soul had hoped the BBFC would give their film the more lucrative 12A rating, which would have enabled the film to be seen by 12-14 year olds, who the producers felt would get a lot from it.

Such was the director Sean McAllister’s frustration with the 15 certificate, that he gave free tickets to his film to under-15s, because he felt young people in Hull would benefit from watching this ‘raw depiction of poverty’ which nonetheless had a redemptive streak. Social media sided with McAllister, and they bombarded the BBFC Twitter account, contesting the 15 rating.

Local councils have the jurisdiction to overrule BBFC ratings if they think they know better, and that’s exactly what councils in Hull did, with A Northern Soul showing up as a 12A on plenty of their cinemas.

I’m the harshest critic of the BBFC sometimes, but I don’t think they’re totally wrong here. Context is everything – the usages of the f-word in About Time were jokey and many of them undirected, and The King’s Speech had the historical context that swearing was a genuine practice for King George VI to overcome his stutter. The way the f-word is said is just as important as its frequency – Phantom Thread barely had more usages of ‘f_ck’ than About Time, but the majority of them came during heated arguments when Reynolds Woodcock was throwing his toys out of the pram, and thus, they were far more impactful. Phantom Thread was thus more appropriately rated 15.

A Northern Soul is a documentary about a man using his hip hop van to bring music into people’s lives, and apparently the f-words are part of everyday usage, and not directed at anyone in particular, like in Phantom Thread. But you could argue that without contextual justification, the not infrequent usages of the f-word, especially around children, who are the ones who use the hip hop van, normalises it. So for that, I agree with the BBFC, and just read this mass overreaction to its rating as the distributors having a Reynolds Woodcock-esque strop.

05. Ready Player One
I would like to preface this by saying that this blog is me predicting other people's complaints to the BBFC of 2018 releases, not my personal complaints. There was nothing, content-wise, in this Steven Spielberg snorefest that troubled the 12A certificate, in my eyes.

In parents' eyes, however, the part where the characters enter a computer simulation of The Shining (itself historically rated 18, but recently down-rated to 15), might have had horror elements that made them contest the rating.

The simulation of the film scenes were creepy, but the tone was considerably alleviated by the fact that Wade (the less attractive version of Miles Teller guy) had entered it with his friends, not to mention in previous scenes, they'd gone into Mark Rylance's other memories so it was clear that the 'scariness' wasn't real.

I'm anticipating that this scene might have sat oddly with parents of pretends, who were ~18 when The Shining came out, and they might find the insertion of a horror film in a kid's gamer film tonally jarring. Due to its reasonable popularity with UK audiences (it was the 24th highest grossing film here last year), I can see it generating sizeable complaints in absolute terms, overreacting as they may be.

Furthermore, as I outlined in my prediction blog of last year, a high quantity of Stephen King movies were historically rated 18. Parents may find the conflation of the 18-rated Stephen King movie and the family friendly-Steven Spielberg film unsettling.

So those are the five films which I reckon the BBFC will outline as being the most complained movies of 2018. In terms of trailers, I think they'll flag the trailer to the 12A-rated Love, Simon being shown before Peter Rabbit and The Greatest Showman, which are PG-rated. However, you're allowed to show trailers for higher-rated films as long as the trailer is the same rating or lower than the feature.

The trailer for Love, Simon is PG, for usage of 'ass', which shouldn't offend anyone. But unfortunately, I saw several complaints targeted at the BBFC Twitter account whining about a trailer about a film about a gay teenage boy being shown before kids' movies. So those complaints are nothing other than byproducts of thinly-veiled homophobia, which shouldn't exist in 2018, but unfortunately, we don't live in a perfect world, so there you go.

Anonymous said...
This comment has been removed by a blog administrator.
6:12 am

Anonymous said...
This comment has been removed by a blog administrator.
12:48 pm

Thanks for the marvelous posting! I truly enjoyed reading it, you happen to be a great author.
I will remember to bookmark your blog and will eventually come back someday.
I want to encourage yourself to continue your great job, have a nice afternoon!

I used to be recommended this web site by my cousin. I'm no longer
positive whether this publish is written by him as nobody else recognise such distinct about my
difficulty. You are incredible! Thanks!

Nice post. I used to be checking constantly this weblog and I'm impressed!
Extremely useful information specially the closing section :
) I handle such information much. I was looking for this certain information for a very
long time. Thanks and good luck.

KAUFMAN: Mark Younger, is the longtime owner of a tiny however elegant flower store in downtown Seattle.