Hey readers! Sorry I’ve been MIA for the last two months; I recently started a job in Finance and absolutely adore it! However, I’m also putting the finishing touches on my PhD, and between that, the 9 to 5 job (where the 5 often extends to much later than 5) and studying for exams that accompany my job, I have had very little time for anything else! Hence the non-existent film discourse.

My coverage of the 2019 Oscar race will sadly be minimal compared to my extensive coverage this year, although, rest assured, I will find time to watch the key Oscar players, come hell or high water!

Until then, here be a review of Planet Hollywood, a cheery-looking place just of Piccadilly Circus that I have long wanted to visit, if only for its enticing name!

I bought a deal for a two-course meal for 2 at Planet Hollywood on BuyAGift.com. I got the voucher with a discount, but I will be assessing the dining experience had I paid the price been what it’s retailing at on the website, without a discount, of £40.

With the deal, you’re entitled to two courses out of a starter, a main and a dessert. This is good because it affords flexibility, with those with a fondness for the savoury dishes given the option of starter, and those with a sweet tooth can choose dessert. What’s more, because the portions are quite large (think American-style portions), two courses will fill you, in the same way that it usually takes all three courses of a Café Rouge-style set menu to fill you.

Because I’ve always loved the sour more than the sweet (my personality in a microcosm, right there. #GoneGirl), I opted for starters instead of dessert. I had nachos: 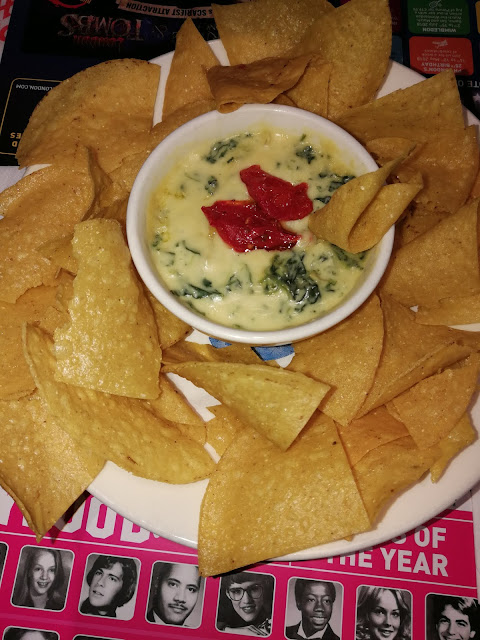 They were moreish and the jalapeños gave them a welcome kick. The cheese dip at the centre of the plate went with the nachos perfectly. I also appreciate that the cooks cleverly embedded some spinach in the cheese; helps the less healthy diners (such as myself) take in one of their five a day without even realising!

For the main, we had the classic beef burger and the sandwich: 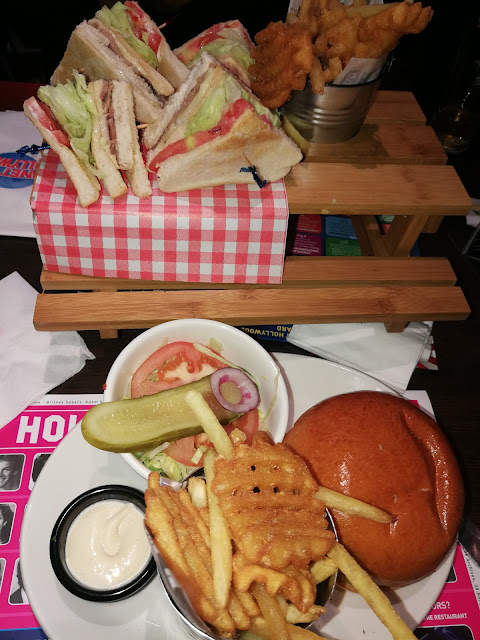 Just as with the nachos, Planet Hollywood didn’t scrimp on the portions, but the quality didn’t suffer for it. My beef burger was juicy, and well balanced with some lettuce, gherkin and tomato. The waffles that came with the chips were fried perfection; and complemented the meat a treat.

These delicious plates, along with the fresh beers that we were each entitled to, as well as the cheerful ambience of Planet Hollywood, meant that we were, up until dessert, having a pretty buzzing time. What a shame that they undid all their hard work, then, with the most sub-par cheesecake I have ever seen. It was so ugly, I didn't even think it was worth wasting the memory on my phone taking a photo of it.

This pitiful excuse of a ‘dessert’ brought back PTSD of Summer 2016, when me and three of my friends from my old work were at the Italian restaurant Ravello. Nick had ordered a tiramisu, and the waiters just brazenly cut a slice from a pre-brought tiramisu in the fridge, right in our eye-line.

At that time, I was just thinking ‘at least try to pretend you prepared it’, but something as dreadful as the cheesecake they served, I guess it’s a fool’s errand to pretend it’s anything other than a CostCo-bought cake that’s been festering in the fridge for a good three months.

As I say, it’s a pity, because everything that preceded it had been fine. But the dessert was the last thing we had before we left Planet Hollywood. It’s ironic, that the sweet dish was what left a sour taste in our mouths.

In the spirit of Hollywood, the first two courses: Jennifer Garner in Love, Simon

Definitely believe that which you stated. Your favorite reason appeared
to be on the net the easiest thing to be aware of.
I say to you, I definitely get annoyed while people consider
worries that they plainly do not know about. You managed to hit the nail upon the top and defined out the whole thing
without having side effect , people can take a signal.
Will probably be back to get more. Thanks

This is not your little brother's video game.

Hi there! Someone in my Facebook group shared this website with us so I came to look it over.

I'm definitely enjoying the information. I'm book-marking and
will be tweeting this to my followers! Superb blog and superb design.

I'm impressed, I have to admit. Rarely do I encounter a blog that's equally
educative and interesting, and let me tell you, you've hit the nail on the head.
The problem is something which too few men and
women are speaking intelligently about. I'm very
happy I stumbled across this during my hunt for something concerning this.