Kiln is a Thai restaurant situated at Brewer Street, in the heart of Soho, an area that is graciously devoid of any franchises. Instead, the streets are filled with restaurants of which there are, at tops, two or three others in the UK, meaning when you dine in this area, you can be certain that your tastebuds will be treated to something atypical.

The dishes in KILN are inspired by the regions where Thailand borders Burma, Laos and Yunnan, whilst incorporating some Chinese herbs in their seasoning. Thus, for those who like their regional food to be nice and mild, some of the dishes at KILN may initially surprise you with their sharp flavouring.

The choice on the menu is quite limited - the current menu only features three starters, three vegetarian/salad sides, four fish dishes, four meat dishes, and three choices of rice or noodles. But the idea is that what they do serve, they do exquisitely. Below are the  Aged Lamb & Cumin Skewer, Isaan Style Tamworth Sausage and Slow Grilled Chicken & Soy: 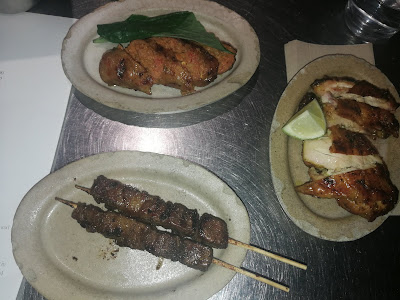 They were each delicious, and the fact that the portions are quite small (and priced as a small dish), means you can try a wider variety of dishes for the same amount of money. All of the ingredients were top notch, and the level of spice was just how I liked it: enough to enhance the meaty flavour of the starters, but not so much to induce rhinitis in me (which unfortunately happens when I dine at South Asian restaurants).

My brother and I also had these dishes at KILN: 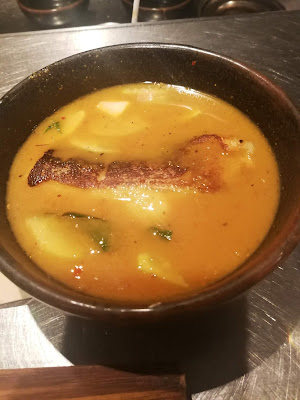 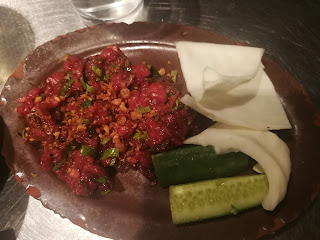 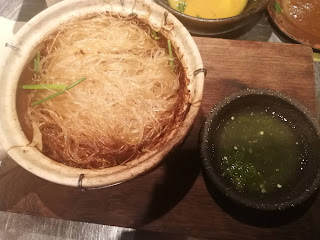 They were: the fried curry monkfish, a beef concoction and the Clay Pot Baked Glass Noodles. They were all really nice, and eating a bite of one thing and then a bite of the other worked well, showing that across all the dishes, the flavours complemented each other. KILN uses fresh seafood that's delivered every day, and this was noticeable in how fresh the monkfish was. The curry soup it had been cooked in was also wonderful, and could be drunk as a type of soup after all the fish was consumed.

The highlight of dining at KILN was the pork belly. As someone who isn’t the biggest fan of pork ordinarily, I’ve come to realise I can only eat it if it’s cooked in an Asian way (On the Bab do the most divine pork buns. You must have them). 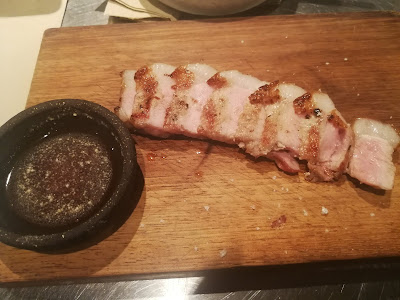 There’s just something about Asian seasoning which lends extremely well to the fatty texture of pork, and the high quality ingredients used at KILN are elevated by the flavours employed.

I wouldn’t recommend KILN if you’re a vegetarian, and less so if you’re vegan. There are only a handful of vegetarian dishes, and they're only there to supplement the meat, rather than substitute them. But if you're carnivorous, it's definitely worth a trip here.

As with Eat Tokyo, On the Bab and Barrafina, two other sought after London restaurants which I gave positive reviews on my blog, you can't book a table at KILN, so you have to show up and queue, but places which make you queue are generally so in demand because their food is so good.

Furthermore, unlike Eat Tokyo and On the Bab, where the waiters are seemingly in a competition to out-surly each other, the waitress who tended to us was extremely helpful, giving us food and drink recommendations. The generosity of her time meant that, in addition with the fine food had at KILN, this is a place I will be whole-heartedly recommending to friends.

You're so awesome! I don't think I've read through anything like that before.

So wonderful to discover somebody with a few original thoughts on this subject matter.
Seriously.. thank you for starting this up. This site is
something that is required on the internet, someone with a little
originality!

I do not even understand how I ended up right here,
however I assumed this publish was once good.
I don't know who you are however certainly you are going
to a famous blogger if you happen to are not already. Cheers!

That is very interesting, You are an overly skilled blogger.
I've joined your feed and look forward to looking
for more of your fantastic post. Also, I have shared your web site in my social networks

Saved as a favorite, I love your site!