I bought a voucher to dine at Kouzu on BuyAGift. The restaurant fancies itself an upmarket Japanese restaurant, and the deal retails at £49 ordinarily, so I will be assessing it as if I paid this amount for the deal (in fact, I got a fair bit off the price due to a discount code, but I’m aware discount codes don’t occur all the time).

The starters were perfunctory. With regards to the salmon, if they were going for the 'high quality and low quantity' vibe that's typical of many high-class restaurants, they really needed to work on the presentation, because what is photographed below doesn't scream 'high-class' to me: 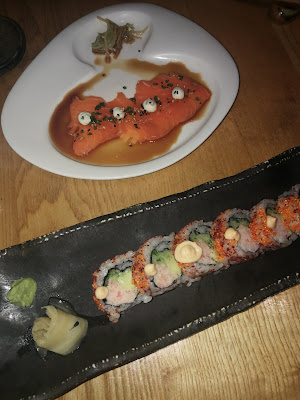 For the main, I had the corn-fed baby chicken with chilli sauce & pickled vegetables for which there was a surcharge for. I think it’s worth paying over the odds for it, as this dish was amazing, and had been seasoned so well. 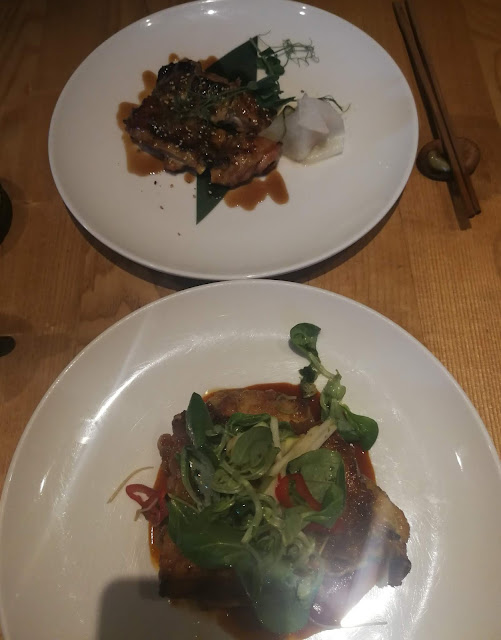 Here's a close-up of the delicacy: 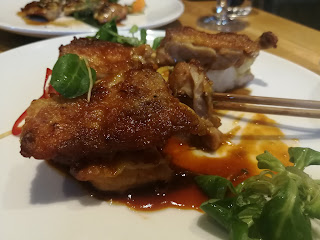 For dessert, I had a passionfruit concoction, which was just delightful. It reminded me of Solero ice creams (which I love), but had a palpably more refined flavour to it. It earns presentation points for being in the shape of a heart! 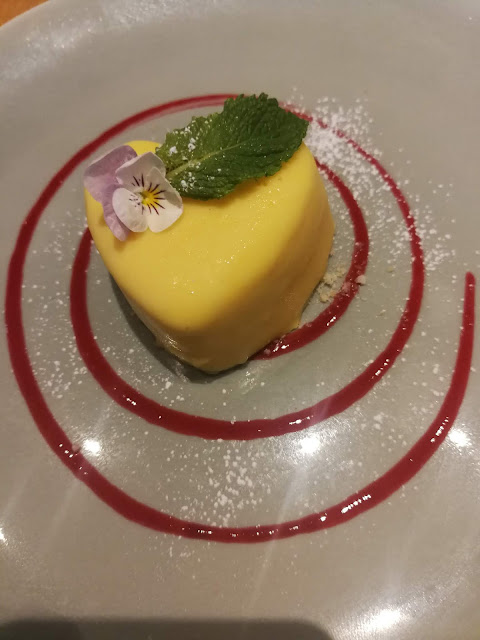 Unfortunately, the waitress who served us wasn’t exactly Albert Einstein, and had told us from the off that the deal didn’t allow us a free cocktail, but rather, a free glass of fizz. The glass of fizz wasn’t tasty at all, and I was somewhat confused because I definitely remember the BuyAGift deal was for a three-course-meal with cocktails for two.

Thus, after dining here, there was some correspondence with Kouzu, and the manager confirmed that indeed, we ought to have been entitled to a cocktail each. As a means of making it up to us, he invited us back, and offered to provide a complimentary cocktail each, and a sharing platter of sushi (although the cocktail wasn’t exactly ‘complimentary’, more like what I was owed for money I had paid for the deal). 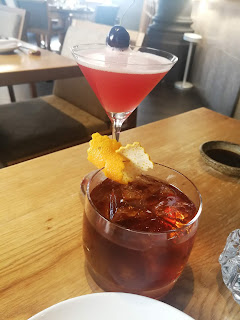 If you like your cocktails strong, I’d definitely recommend going for this deal, because one of the Kouzu cocktails should sort out your inebriation levels for the next two hours, at least. I personally prefer my cocktails more fruity than alcoholic, so it wasn’t quite my tempo, as JK Simmons in Whiplash might say.

The sushi rolls were delicious. As you may have gauged, I adore Japanese food, and the balance between flavour and content in these sushis was great. The fish slotted in the middle was devilishly succulent. However, at £15, it was a little over-priced for what it was; I wouldn’t have paid retail price for it.

Thus, a bit of a mixed bag.  I’m not impressed with the initial mix-up (I fervently believe that if restaurants are going to bother having deals, then they ought to communicate with the rest of their staff so there are no confusions like the one I experienced), but at least they tried to atone for their mistake (several restaurants try to pass the buck when they've done something wrong and just hope you'll forgive and forget. I have a blog; I have no intention of forgetting). 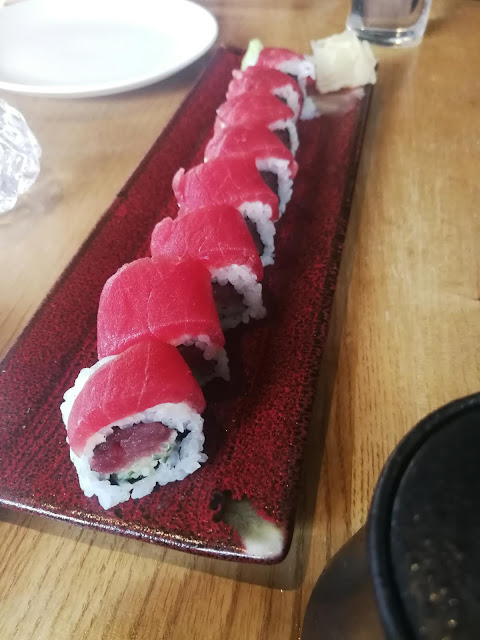 So, for a voucher deal, you will be well-fed, in a restaurant with fine atmosphere and decor, although £49 for it is still relatively steep.

As for the place's objectives of being fancy, the food would have to be slightly higher quality, to merit that status.

I have the good fortune of a) living in London and b) being able to spend my Saturdays exploring London's restaurants. For my thoughts on all the places I've been, click here!
Posted by Emma at 10/07/2018 04:21:00 pm

Does your website have a contact page? I'm having a tough time locating it but, I'd like to send you an email.
I've got some ideas for your blog you might be interested in hearing.
Either way, great blog and I look forward to seeing it expand over time.

You really make it seem so easy with your presentation but I find this topic to be actually something which I think I would never understand.
It seems too complicated and very broad for me.
I am looking forward for your next post, I'll try
to get the hang of it!

I am regular reader, how are you everybody? This paragraph posted at
this web site is really pleasant.