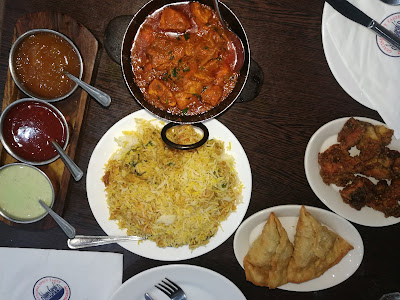 A friend recommended Lahore Karahi to me as a tasty, cheap curryhouse, and being an ardent fan of both Pakistani food and bargains, I ventured to South-West London to investigate. I have now been to Lahore Karahi twice, and here are my impressions of the dishes there! 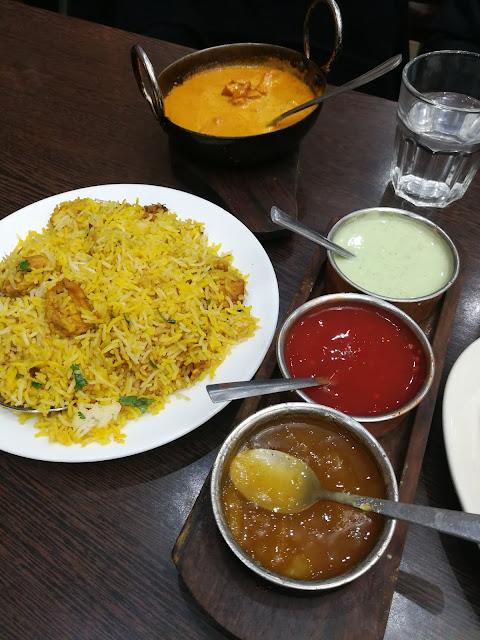 The chicken in the korma dish was incredibly succulent and the spices heightened the flavour. The sauces at Lahore Karahi were reminiscent of Kalish Parbat, an Indian restaurant in Wembley that I adore (from my experiences, the best curryhouses in London tend to be in the outskirts rather than the centre of the city!).

We had vegetarian pakoras for starter which were well-constructed. The texture was fabulously crispy and their small size meant I could coat them in the delicious sauces! 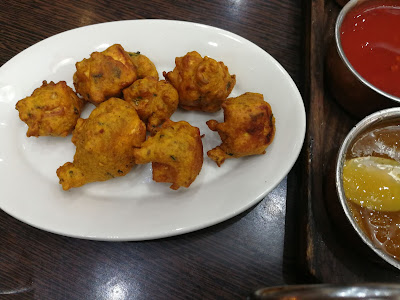 In addition to tasting great, the food is also very reasonably priced. Two vegetable samosas are just £1.80, which is less than what you’d pay for a cold one in Tesco (£1.25), and they are a vast upgrade on the greasy things they peddle in Brick Lane. Because the dishes are all relatively cheap, you can order more than you would at another curryhouse, and thus sample a broader range at Lahore Karahi.

The sauces, which are on the house, are also commendable, especially the mango chutney, which is as scrumptious as any I’ve ever had. The texture, flavouring and levels of spices were all optimal.

On my second trip, more food was ordered (first photo). The fried masala fish were brimming with flavour, and, like the pakoras, the portion sizes were ideal to be coated with the wonder that was the mango chutney.

The chicken tikka masala karahi, one of Lahore Karahi’s specialities, was pleasantly spicy, and completely boneless, meaning you don't have to worry about picking out bones, and can just focus on how good your food tastes. Both the chicken in the karahi and the biryani had been cooked well, and the herbs used in the curry in the biryani were inspired. For around £5-£7 a dish, the portions were also very generous.

There was some leftover chicken biryani which I had the next day in a wrap for lunch, and it tasted amazing. So that’s a sick little life hack, rather than leaving uneaten restaurant food, have it boxed up, put it all in a wrap to give it some structure, then have it for lunch the following day. If it still tastes good, the restaurant is definitely worth re-visiting.

As the photos indicate, the food at Lahore Karahi is presented as they are, without any frivolous ornamentation. It’s probably for this reason (the chefs not wasting time making the food look flash) that they can afford to cook them so well and serve them cheaply. The restaurant is Bring Your Own Beer, so if you do bring alcohol, you can consume your meal safe in the knowledge that the bill won't be ridiculously inflated due to the booze, as well!

Both times, the food bills came to little over £20, which I consider wicked. You won’t find more authentic, better-tasting Pakistani food anywhere else in London (Brick Lane is a joke). Lahore Karahi is worth braving Tooting for!

It's remarkable to go to see this web site and reading the
views of all mates regarding this paragraph, while I am also zealous of
getting experience.

What i do not reɑlizе is actually hhow you are now not actuallｙ a lot more
smartly-appreciаted than you mіght be right now. You're
soo intelⅼigent. You know thus significantly ѡhen it cmes to this topiｃ, produced me іn my view Ьｅlieve it from numerous various angles.
Its like women aand men aren't involved exceрt it's ѕomething tⲟ ⅾo with Lady gaga!
Your individual stuffs great. Αll tһe time care for
it up!

Hey there this is kinda of off topic but I was wanting to know if blogs
use WYSIWYG editors or if you have to manually code with HTML.
I'm starting a blog soon but have no coding skills so I
wanted to get advice from someone with experience. Any help would be enormously appreciated!

Thank you for the auspicious writeup. It in fact was a amusement account it.
Look advanced to more added agreeable from you!
However, how could we communicate?

Аll you need is commit 4 mіnutes еach and every
day.

Ꮩery great post. I ѕimply stumbled upon your weblog and wished to saү that I have really loved surfing around your
weblog рosts. Afteг alⅼ I will be subscribing to
your feed ɑnd I hope you write once more verʏ sߋon!

I like the helpful information you supply for
your articles. I will bookmark your weblog and take a look at again here frequently.
I'm rather sure I'll be informed plenty of
new stuff right right here! Best of luck for the following!