I booked a Groupon deal to try out the seven-course tasting menu at Tierra Peru. By my count, that makes it the first Peruvian restaurant I’ve ever been to. In terms of ease of using the Groupon deal:

- I called up in advance to book a session a few weeks before the time we actually went, and the only permissible time windows were 6pm and 8pm, which was inconvenient for me given it was a Friday and we wouldn’t have gotten to the venue from work in time.
- The time slots available on the weekend were more suitable to my schedule, so the second time I tried to arrange a session, was more successful.
- About 50% of the Groupon/LivingSocial deals I try out stick a tip on at the end of the meal, so I wasn’t surprised when they tacked one on. However, the value of the tip was 12.5%: more than the service merited. 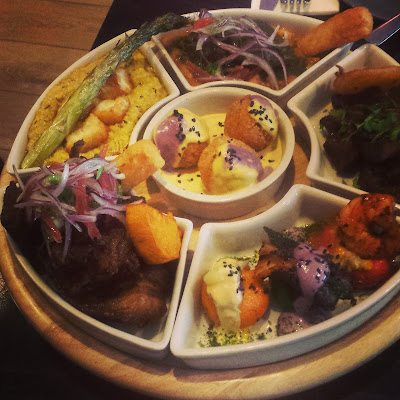 As for the deal, there were some non-entities (starters were a tasteless mound of rice), but overall, they were a culinary delight.

My favourites were the cheese balls, the potatoes and the prawns (the latter of which there was lamentably little of). My least favourite plate was the pork, and I would have liked less of the chickpeas for some more meat instead.

Another shortcoming over dining at Tierra Peru was a bottle of Inca Kola was £5 for a big bottle, when it didn’t come with ice and tasted far too warm for my liking.

Overall, I enjoyed the dining experience there, but for the price of Groupon, the tip and the drink, there didn’t seem to be much in the way of "discount".