Genie of the Lamp.

When Frank Lampard scored the penalty for Chelsea against Manchester City by smashing the ball down the middle, he made a statement for the title race; it was not going to be a Manchester duopoly if Chelsea had anything to do with it. It was also a statement of another kind: that despite what the Media said, despite even what his gaffer might do, Frank Lampard was far from over.

Benched for Chelsea’s vital Champions League match against Valencia and then benched for this game, it marked a murky period. The previous ten years, Frank Lampard had been invincible for Chelsea. Under Andre Villas-Boas’ vision for the team, though, Frank Lampard’s role within the club has been far more peripheral. Discontent with his performance against Newcastle, which included a penalty miss, the manager had subbed Lampard off at the hour, and the Englishman’s fury was so transparent it could be felt through the TV screen. Ignoring the manager as he skulked off, he sat in the dugout, glowering menacingly with arms crossed.

As the only member of the Chelsea squad to have attended a private school and with a handful of GCSEs, some at decent grades, Frank Lampard is a lot smarter than the majority of his teammates. He knows better than to shit stir or say anything overtly pejorative of the manager, because he knows his words will simply come back to bite him in the team selection. On Monday night though, Lampard could not resist a few incisive but very carefully selected words. “I want to play, simple as that,” he said. “I’m as fit as I’ve ever been. I’ve been in a good run of form and now I’ve not been playing. I haven’t spoken him so I don’t know why, simple as that.” With his goal celebration on Monday which was cathartic, bordering on deranged with a touch of Balotelli, his emotions threatened to bubble over.

Lampard is right to feel aggrieved. He has given Chelsea football club the best part of his life and his seven goals this season and several assists – a record that is even more impressive given that some of his appearances have been in the limited time as a substitute – is excellent for a midfielder, indeed, it eclipses that of Luis Suarez’s at Liverpool, say. He never shirks his duties, and when Chelsea are chasing a result, he is precisely the type of player you need. Raul Meireles, essentially the one that has displaced him in the Chelsea starting XI, is settling in well (indeed, he also scored on Monday night) and five years Lampard’s junior, it is not unfair to say he is more mobile and probably more dynamic. But Lampard has one of the best footballing minds in the premier league, and so for AVB to not even consider a trade-off between playing time for these two players and to essentially pick one over the other, little wonder that Lampard feels so aggrieved. 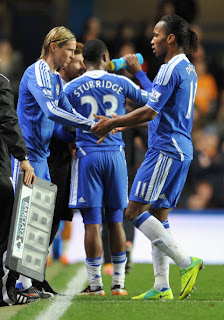 Obviously, it would be blind to say that he is identical, nay, better than the player he was three or four years ago. With each year that he ages, he slows a little, and in that sense he is the most unfortunate of Chelsea’s “old guard”; Terry and Drogba are also getting on now, but Terry, as a centreback, can usually rely on his fullbacks to cover for his lack of pace. And Drogba is rare type of player who genuinely seems to get better with age, not least because he knows he needs to keep Torres out of the starting XI, and that galvanizes him more than anything. And, as mentioned, Lampard does seem to have lost that infallible penalty-taking touch he once so possessed. So when we consider these points, AVB’s occasional decisions to bench him don’t seem totally radical. Chelsea fans can accept that their prodigal son and by far the fan’s favourite will not be starting every single game these days, especially as the manager has a vision for the future that rests on the youth of Oriol Romeu, Juan Mata and Daniel Sturridge. But at the same time, Lampard is far from being over and thus undeserving of the total freeze out he seems to have experienced of late.

Writing Frank Lampard off is a dodgy business. All the papers did it earlier this season when he didn’t start an England game. The result? Frank Lampard came back, not only as England captain for their friendly against Spain, but he just so happened to have scored the winner and only goal in that game. Similarly, “pundits” who were so gleefully relishing the end of his career for Chelsea were laughing on the other side of their faces when he returned with a Man of the Match performance against Bolton that just so happened to feature a hat-trick. He shines against all opposition, man or mouse, and his goals don’t just come when the game is sealed – Lampard has gotten four of Chelsea’s matchwinning goals this season – against Man City, Blackburn, Bolton, Norwich, so illustrating that this is a player who does not lose his head when the team’s backs are against the wall. There is nothing we enjoy more than proving our detractors wrong, and Lampard is no exception; football writers’ words of discouragement merely spur him on the train harder (not that he needs to train), to play better, and show the world and his son that they are wrong.

In order to take penalty on Monday Frank Lampard had wrestled the ball away from Juan Mata, whom AVB had assigned penalty taking duties to following Lampard’s previous two misses. It was a ferocious penalty, slammed right down the middle and reminiscent of the one he scored against Manchester United in the league last season – a game won in identical circumstances. Except this penalty had even more bite to it, and it is probably not inaccurate to suggest was a physical embodiment of some of the rage Frank has been internalizing of late. His penalty opponent and England teammate Joe Hart smiled a rueful smile as Lampard wheeled away to the fans in celebration; he knew there was no stopping that penalty. And there is no stopping Frank Lampard either, a man with plenty of life left in him and a lot more still to give.
Posted by Emma at 12/14/2011 10:22:00 am

How to update r4i gold non 3ds card?
hello readers:i necessitate to to update my r4i gold non 3ds card. the undivided released b4 the r4i gold 3ds card. it works on my 3ds though. just now i updated my 3ds to v.2.1.0-4u my r4i gold union card doesnt work. what should i do?I lay out on buying an R4i gold be unsecretive after me and my brothers DSi, but I don't positive what website to suborn it from. http://www.ndsmajikon.com/pandora-3ds-card-for-nintendo-3ds-dsi.html
http://www.ndsmajikon.com/r4i-gold-plus-card-2-2-0-4j-3ds-fw2-2-0-4.html