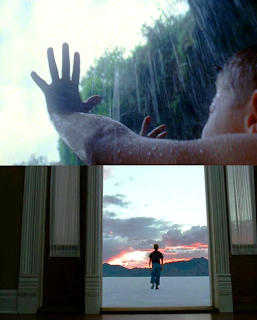 Pretension. It’s a funny thing. I prescribe to the Monica Bing school of thought, that a little bit of pretension never hurt anyone. It is definitely a thing of which, however, too much of can kill.

Cannes winners have, in the past, gone into one set column or the other for me. Pretty much half of them, I appreciated their artistry, but, even more than that, connected with them on an emotional level, and thus really adored them. The others, I have found frustrating and to be perfectly honest, far too clever for their own good. The Tree of Life is one which firmly falls in the latter camp.

Brad Pitt and Jessica Chastain head a good ol’ Christian style family in Texas. Pitt's character is the epitome of graft as he trains his songs to fight, build things and generally toughen them up against the big bad world, which he believes will take advantage of you if give it the chance. Jessica

Chastain's matriarch, on the other hand, believes in living life through the way of grace, rather than nature. She tries to put a dampener on her husband’s volatile and bullish behaviour, which often has a detrimental impact on their three songs, not altogether successfully. At a young age, one the sons commits suicides, posing questions of faith, morality and existence to all involved. 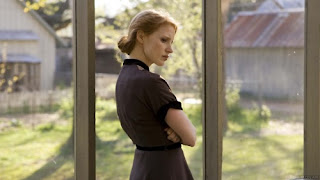 The Tree of Life is, essentially, Terrence Malick’s soliloquy with God. “Why should I be good if you aren’t?” a character asks, later characterized in Sean Penn, a Houston architect who feels stifled by the heady skyscrapers he surrounds himself with everyday.

Malick’s brother also committed suicide, leading understandably doubt his belief. And, fair play to him, for getting arts grants from whomever he managed to con into allowing him to film this, because it is, without hyperbolizing, one of the dullest things I have ever had to sit through.

I wasn’t a huge fan of Lars von Triers’ Melancholia, which touched upon similar themes to The Tree of Life, and some film critics have offered as a complement to this film. But at least that film, for all its flaws, had moments of humour and colour interspersed with the dryness.

The Tree of Life has colour all right, in terms of vividly CGI-d creation scenes, but very little in terms of emotional core or interest. Brad Pitt annoys and it is easy to see why his sons despised him so, despite his best efforts. Sean Penn features very little (probably the best thing I can say about this snorefest), but when he does, he just channels Penn in 21 Grams with a constantly perplexed/angry/bemused look on his face. Oscar winning this most certainly ain’t.

The young kids in the film, played by relative newcomers to the acting circuit, do their jobs admirably enough, but the fact that they are speaking Terrence Malick words makes it hard to warm to them.

The film’s only saving grace is Jessica Chastain, who gives a beautiful performance, full to the brim of warmth and love. She never over or under acts, despite Malick having written her as a kind of “doting wife and mother” archtype. It’s a thankless role, but Chastain truly impresses in it.

And I am trying to find other redemptive features of the film, really I am, but that is about the only good thing I can say about The Tree of Life. My housemate said “I have absolute no interest in seeing THAT” and I have no idea why I didn’t listen to him, because it is two and a half of my life I shall never get back.

Even Alexandre Desplat’s score, which I would normally appreciate (man is a genius), is tainted by the fact that it appears in this Bible Bash of a film, as does his good eye for cinematography (used to such good effect in films that he has made well, namely Days of Heaven and The New World).

Want a little taster of Tree of Life? Go to the book of Job, pick a verse, any verse, blast some classical music from your iPod dock and flick through a photo album of images of nature. It will be much, much, much more fulfilling than watching this piece of trash film was.

If Terrence Malick really loves his "God" so much, one would have thought God would have blessed him with a slightly better movie.

Shame, it sounded good to begin with and I like Brad Pitt, but you've saved me from getting this on DVD!

The Tree of Life ..... hmmmmm very intersting article, thanks for it!

The film is not about religion at all. I feel you missed the point. And the creation sequences were not CGI, they were actually carried out in a studio, using different paints and liquids.