Autumn time, and the living is cold. 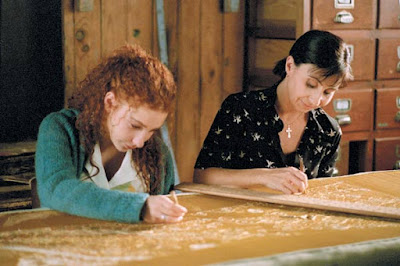 Claire Moutiers is an emotional, unusual teenager with a head full of curly pre-Raphaelite hair a serious predilection for embroidery. She also happens to be pregnant. The film follows her journey as she gives up her humdrum job in a supermarket to work for famous sequinist Mme. Mélikian, who is mourning the loss of her son.

Directed with meticulous detail by Éléonore Faucher and with gorgeous scenes of the two women working on a piece of embroidery, A Common Thread is quite slow-moving and definitely goes with its own pace, but it’s a seriously beautiful movie encompassing themes such as maternity, creation and loneliness.

Lola Naymark is terrific as the mercurial, feisty lead, and you find yourself rooting for her throughout, even if you don’t know her that well. And there is an unbelievably erotically charged scene where the love interest (played by Thomas Laroppe) kisses a highly pregnant Claire near a tree which is pretty much my highlight of the whole movie.

A Streetcar Named Desire
When I first saw this film in 2003, I completely fell head-over-h

eels in love with Marlon Brando, the art of acting, and movies. Having studied the text for English Literature AS and had to sit an exam on it (“Stella is also a victim. Discuss.”), I feel I know the text quite well, and am truly amazed with what Brando did with Stanley.


Actually, in many ways, he presented Stanley in too nice a light; in several scenes he lacks the edge of maliciousness that Stanley Kowalski had in the novel and his choice to tell Mitch seems more about Blanche’s history seems to genuinely be out of concern for his mate rather than a personal vindication, but, considering all the moral codes of the 50s, Elia Kazan really manages to stay as true to the play as he can, and the film contains two of the best male and female performances of all time.

tress, the Goddess that is Audrey Hepburn. Breakfast at Tiffany’s has everything that I love about New York, Henry Mancini's score is a classic (Audrey singing Moon River is one of the most iconic moments in cinema), and 99% of the supporting players are likeable (Mickey Rooney is my second least favourite Rooney of all time; his racist “performance” is a joke.)

The film hasn't aged well (it is not acceptable to have a Caucasian play an East Asian character, and a stereotype of one at that), but is still worth watching for Hepburn's movie-star charisma alone.

Far from Heaven
I love the lushness and richness of the set design so much in this movie that I have to watch this every October to relate to the falling leaves and glorious colours in the movie.

Technicals aside, this is also one of my favourite movies for emotional reasons; the story of Cathy Whitaker, the “perfect wife” whose life slowly falls apart in front of her as she discovers of her husband’s interest in men is heartbreaking as it is engrossing, and Julianne Moore transcends as Cathy, giving one of my favourite performances of all time.

She’s a joy to watch from start to finish, and in particular, he scenes 24’s Dennis Haysbert tingle erotically with the unsaid. Oh, and Elmer Bernstein’s score is beautifully evocative of the era.

A truly magnificent film, and I love it more than many if Bergman’s more critically acclaimed ones, such as The Seventh Seal. A powerful and almost unbearable tense drama on family, inadequacy and playing the piano, Liv Ullman is so incredible that she even outshines Ingrid Bergman.

The late night showdown between the mother (Bergman) and Ullman (daughter) is one of the most painful and draining scenes in cinema history.
Posted by Emma at 10/23/2007 06:13:00 pm

Anonymous said...
This comment has been removed by a blog administrator.
8:47 pm

It's so sad that no one has ever managed to make a decent version of "And Then There Were None" on film.

I love Autumn Sonata. It's my favorite of Bergman's too.

Thomas Newman is awesome. I love his work on American Beauty more then the film itself.