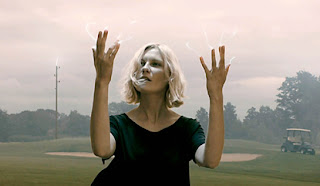 Film stars rarely let us into their own private worlds. So it was a great surprise, then, when Kirsten Dunst recently admitted to suffering from depression. In her Cannes-winning performances in Melancholia, she plays Justine, a woman who also suffers from depression. The film, set a few nights before the apocalypse, centres around Justine’s wedding night and her trepidation regarding it, as well as her sister Claire, who is struggling to hold everything together.

The film is divided into two acts, one centring around each sister, but not before we are “treated” to a montage of the world ending, set, rather portentously, to Wagner’s Tristan And Isolde. Those who are bigger von Trier loyalists than myself would say the choice of music is appropriate for the weightiness of such scenes. I, on the other hand, found myself struggling not to laugh as the audience are forced to sit through a truly tedious 10-minute overture, which featured some footage of Charlotte Gainsbourg running in slow-motion on a golf course, and Kirsten Dunst floating in her wedding dress in a pond full of green lily pads, ala the portrait of Ophelia. The whole vignette just reeks Kubrick at his self-serving worst, it’s just so awfully self-important that only those who have pretentiousness for breakfast (and, truth be told, I am fairly pretentious as it is) could take it seriously, however gorgeously it is shot.

When the actual film begins, however, things pick up. In Part I: Justine, we are thrown into a sort of wedding-from-hell scenario; Dunst and her tycoon husband-to-be (Alexander Skarsgaard, cute as a button) arrive late to their own wedding reception. Her sister Claire (Charlotte Gainsbourg) is already fretting as it is, Claire’s husband, John, is resentful at having to pay for the whole thing. As that dog/fox in von Trier’s equally pretentious clit-film last year, AntiChrist might say, “chaos reigns.” Justine and Claire’s estranged mother (played by Charlotte Rampling, epitomizing bitch in a way that only she can) carelessly drops waspish comments throughout, whereas their fun-loving father, played by John Hurt, brings two mistresses and has the time of his life swiping spoons. There is a claustrophobic sense of foreboding throughout, not helped by Justine’s predilection for sneaking off to be alone with her own thoughts. As the night unravels, she becomes increasingly fraught and depressed, despite the best efforts of her husband to cheer her up. Only Claire comes close to understanding her sister’s plight, but even then, she can’t prevent it. It is a self-fulfilling, self-destructive cycle to which no happy ending can be found.

In the second half of the film, Part II: Claire news has spread about Melancholia, a planet several times the size of earth, on a collision course, which may or may not take it straight where the earth is. Now it is Claire who is slowly losing her mind, as Justine finds a strange sense of consolation in knowing that life will soon end. The dynamic between the sisters change, and both Dunst and Gainsbourg give terrifically nuanced performances throughout to demonstrate thus. It was Dunst who picked up the gong at Cannes but personally, I was more taken by Gainsbourg in the film. Unlike in mysogyndrama AntiChrist, where she cut her own clit off, she doesn’t subject herself to such humiliations in this film, and her balancing act between being the caring sister trying to stop everything from falling apart and the worried mother fearing for that it all might fall apart anyway, lends to a terrifically layered performance.

Indeed, I would say it was the only thing about Melancholia which had any true layers, for I found other parts of the film horrifically caricaturist, bordering on farcical. The absurd opening, the over-usage of Wagner bordered on nauseating (note to the director: Terrence Malick’s used Wagner in the past, and done it much, much better than you could ever hope to, just truthin’). Long passages of the film are empty and downright uninteresting, the 130 minutes running time is nothing if not generous, and von Trier’s treatment of mental illness is done with a careless flick of the hand when it deserves much more.

On balance, Melancholia is a beautifully shot and excellently acted drama, but, for me, impossible to view as anything other than a comedy. Either Lars von Trier is having a gigantic laugh at our expense, or arthouse fans try far too hard to read deeply into things; but this film was not anywhere near as deep as it liked to think it was. Played out half as a fairly amusing satire on social airs and graces, half disaster movie, I could have accepted Melancholia. But if it thinks it has anything to say about depression, or the bigger picture in life, than the film, and Lars von Trier, can make like Keifer Sutherland at the end of the film, and get stuffed.
Grade: C
Posted by Emma at 10/09/2011 05:48:00 pm

Did you know that you can shorten your long urls with Shortest and earn money from every click on your shortened links.